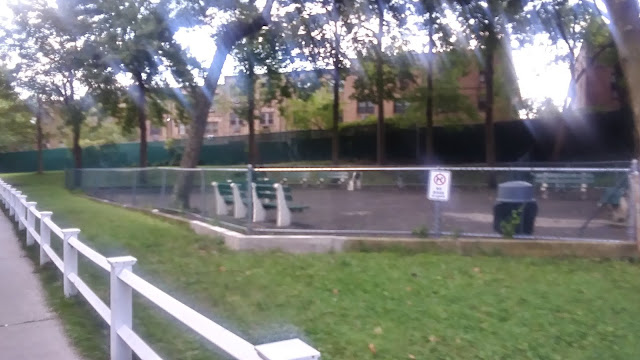 Assemblywoman Jenifer Rajkumar walked through Woodhaven with the Department of Transportation’s (DOT) Queens Commissioner Nicole Garcia last week to discuss adding parking spots to the area, sparking a heated debate about the proposal.

Rajkumar said that a lack of parking has been a long-standing issue in Woodhaven, claiming some of her constituents even sleep in their cars waiting for a spot.

There has been contention over the proposed parking on 98th Street near the co-op, which is right next to Forest Park.

The confusion erupted after Rajkumar released a statement saying she would advocate to “convert” the “vacant park space” on the “corner of 98th Street and Park Lane South” into a parking lot. However, the assemblywoman has walked back on that statement, saying she never intended to take away any green space for parking.

That proposal to convert a “vacant park space” is for a gravel lot across the street from Forest Park on 98th Street.

Before the assemblywoman clarified her mistake, people took to Twitter angrily responding to her plan.

All of the confusion stemming from the original statement even resulted in a protest outside of Rajkumar’s Woodhaven office on Sunday, Sept. 5.

Rajkumar’s chief of staff clarified that statement and said none of her proposals include taking over any green spaces.

“To be abundantly clear, Rajkumar never at any time proposed a parking lot inside Forest Park,” said Rajkumar’s chief of staff Vjola Isufaj. “Facts matter. That kind of outrageous sensationalism based on wrong facts and lies may be fun on Twitter, but it’s not truthful and isn’t helping anyone in our district.” 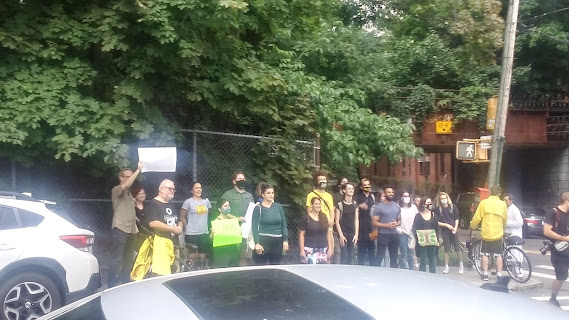 Assemblywoman Jenifer Rajkumar needs to learn to admit when she’s wrong and just move on. Instead, she’s led us and her constituents down a rabbit hole of confusion this week, one so weird and in denial of reality that seeing Alice in Wonderland joining a tea party at the Forest Park Co-op in Woodhaven would not be the strangest thing.

As with so much in Queens, the root of the problem is parking. Rajkumar, to her credit, wants to get more for residents of the co-op. She’s proposed, for one thing, some diagonal parking on 98th Street where it runs through the complex just north of Park Lane South. If there’s room, that’d be great. But she also proposed, bizarrely, creating parking in “the vacant park space at the corner of 98th and Park Lane South.”

The “vacant park space” at that corner is a part of Forest Park designated as Forever Wild by the city Parks Department. It must remain so, for the benefit of all (think drainage in a storm!). It’s also on a hill, next to an old railroad. Turning any of it into parking would be an engineering nightmare, if not impossible.

When this was pointed out to Rajkumar — and when a mix of environmentalists and her political opponents protested — her office went silent. Then, as the Chronicle pressed the issue, things got weird. A staffer claimed Rajkumar had never proposed parking at that corner. But she did, in writing, on the internet, in public. Eventually the assemblywoman sent us an email her office previously had sent the Department of Transportation claiming that she “never at any time supported such a plan.” Really? She proposed it.

Then the office shifted to claiming that she really had been talking about a “vacant plot of gravel,” with the assemblywoman herself explaining that it was not at 98th and Park Lane South but on 98th off Park Lane South. She’s apparently talking about an asphalt (not gravel) seating area in the co-op complex. It doesn’t look like it would fit many cars, but if that’s what the residents there want, OK; it’s not precious parkland. (But,but trees...-JQ)

Meanwhile, Rajkumar denies any mistakes at all, telling us that “all of the releases and plans that I have sent out were perfectly correct.” Nope. Why claim something so obviously false? Just admit the error. Otherwise it’s tea time with Alice at the co-ops.

Cute analogy, but all those charlatans still showed up and held a fake protest in front of the abandoned Rockaway Rail Line train station. And despite the "forever wild" designation, it's been a transit graveyard for 60 years. It's also not parkland. Plus Rajkumar's chief of staff sent a post clarifying the parking proposal. These actorvists chose to be confused.

You know Alice could have decided not to follow the bunny. But then there wouldn't be a story...

Katelin Penner is from a well off area in Westchester County. We don't need virtue signaling activists who's proverbial balls dropped two days ago to impose their values on us. Though she's easy on the eyes.

Finally a politician who is advocating for the needs of the everyday regular citizen and trying to get more parking and making it easier for us to get around and find a place to park and not worry about a ticket. I'm so tired of politicians pandering to these small liberal fringe groups and completely ignoring the needs of the majority of the community members.

Pandering to the over privileged car owner set again. Car owners are a bunch of Zealots who want nothing less than concrete and fumes everywhere.

I'm so tired of politicians pandering to these small liberal fringe groups and completely ignoring the needs of the majority of the community members.

THAT IS BECAUSE THERE IS BIG MYSTERY MONEY BEHIND THEM.

WE NEED TO FLUSH THAT OUT AND WHO IS SUPPORTING THEM.

@“ THAT IS BECAUSE THERE IS BIG MYSTERY MONEY BEHIND THEM.

WE NEED TO FLUSH THAT OUT AND WHO IS SUPPORTING THEM.”

If you are referring to the over privileged car owners, then look no further than the oil industry and automobile industry.

Why not turn Central Park into a parking lot?
That may keep the over privileged car driving bullies happy for a day.

If the Sheeple are looking for parking spots, look no further than the LIE. Park in the morning and pick it up in the evening. Free of charge.