Queens friends, this is TOMORROW! Join AD38 comrades outside her office at noon tomorrow to protest Rajkumar’s plan to use “vacant park space” (????) for a parking lot in Forest Park. pic.twitter.com/Z3ccCM8SV2

Oh my! What's this about? The assembly member wants to bulldoze part of Forest Park for a parking lot?! Really?

Hmmm. Sounds a bit suspect. I mean it would require a ULURP, change to the City Map, environmental review, etc, etc, none of which an assembly member would have any control over. And that photo is of a gate that is not inside Forest Park. This is a bit of a mess. So where did the SJWs get the idea that trees would be chopped in Forest Park?

I will be meeting Monday morning with Queens DOT Commissioner Nicole Garcia on the lack of parking in Woodhaven. I have developed a plan to open more parking spaces. I look forward to a productive meeting with the Commissioner.👇 pic.twitter.com/CJuII1wsNB

In Jen's original press release, she says she wants to "convert to parking the vacant park space at 98th Street and Park Lane South." So rather than asking for clarification on what space she was referring to, the woke went straight to cancel mode, started a nasty Twitter campaign and organized a protest. The assembly woman's office responded thusly: 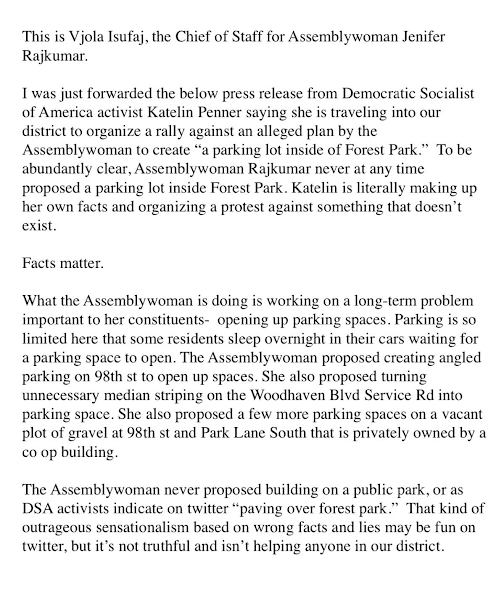 Now there's nothing more delicious than a politician being caught in their own lies, but it doesn't appear that is the case here, just a matter of miscommunication/misinterpretation, something that could have been cleared up with a quick phone call. Because, indeed, there is a gravel lot or "unused park space" in this location:

If the Co-Op wants to convert its unused "park" space to parking, who the hell cares? DSA does because 1) Cars are "evil." 2) This isn't about protecting Forest Park. They stupidly ran a poet against Mike Miller and Jen won instead. Now they want her out and by any means necessary. Hence the fake "save the park" protest on Labor Day weekend. They're mostly white people from outside the district and they are organizing a hate campaign against a woman of color who beat out a white man. Not a good look!

We rallied to protect the park from being converted into a parking lot. 📷: @aaronnarraph pic.twitter.com/E99d0S1ICC

Headline: "White people with nothing better to do on Labor Day weekend protest make believe paving of Forest Park at a location that isn't Forest Park" (It's the Rockaway rail line.)
Posted by Queens Crapper at 9:01 AM

Demorats at it again ! One party rule in NYC is not working...

Somewhat really stretching that Rajkumar is a "person of color". As an Italian whose family has dark olive skin, dark hair and eyes, you might as well call Italians "people of color". STOP misusing the tern "people of color" for your own agenda.

"Parking Spots"&"Parks"
This is just the beginning, think housing, medical care, schools, Fire, Police, Sanitation...
We must undo the damage of unpatriotic and evil charlatans who desire to destroy America.
The NYC Sheeple will witness Biden’s border crisis first hand as illegals are pushed into you neighborhoods taking your resources !

This was a good commentary on the issue. The argument was logical and showed the stupidity of these knee-jerk fools.
However, the writer fell into the DSA obsession about race. Please avoid talking about race. I’ve noticed the race card is primarily used when the arguments are weak (so it’s becoming tiresome). Your argument is strong.

No, no, I used the DSA obsession about race to throw it back in their faces. The race card is what they fall back on, so they should live up to the standards they set.

These activists can go fuck themselves. Katelin Penner isn't even from NYC, she a zoomer who grew up in Westchester and goes to college in Connecticut. Why doesn't she try this shit in Westchester in communities like Yonkers, Mount Vernon and New Rochelle which have plenty of "persons of color" and see how quick these "persons of color" chase her out of the community.

Record flooding and she wants to pave more green space? That's the real issue. Activate the Rockaway Branch and the residents have express bus service and the J line nearby.

This blog complains about overdevelopment yet this is what adding free parking does. More cars more traffic.

Isn't Forest Park unsafe for people to use as a recreational facility, other than to do drug deals?..Pave it!

“ Record flooding and she wants to pave more green space?”

Katelin Penner has pronouns in her bio, and Rajkumar does not. Point to Rajkumar.

Here's something to ponder.

If they care about trees and want to stop wanton destruction of park space. They can go to East River Park and stop the demolition that was fast tracked by the Blaz

The dregs of society banding together, folks.

@“ Anonymous said...
This blog complains about overdevelopment yet this is what adding free parking does. More cars more traffic.”
This blog is run by a bunch of nut jobs.

Car hating gentrification transplants from wealthy suburbs and places like Ohio - folks who have been displacing native New Yorkers, older immigrants and working class people of color - are complaining about a politician who responds to the parking needs of her Latino, South Asian and White working class constituents. So on brand for the DSA.

How come they are not protesting destroying the "green space" in Staten Island where BJs wants to open a location?

People who live near Woodhaven pay their high rents, high property taxes and there are a lot of seniors who live there too.

All they want is a few more parking spots so they can park their vehicles. The buses on Woodhaven are extremely slow and people have to wait a long time for the buses to arrive.

They shouldn't be punish for that. In fact, it is the people who contacted J. Rajkumar and asked her to look into the problem.

The DSA should focus on the major gun problems, the gang violence, small businesses who have shut down due to those unused bike lanes, focus on why there are too many criminals on the streets because of "bail reform", demand the city build more affordable housing instead of building "luxury condominums" for the wealthy, and shut the fake psychics that have plagued Queens with their fake palm readings and con people out of their money.

The DSA have their priorities all backwards.

Queens could use a few hotels constructed in Forest Park

Some day somebody will finally figure out that concrete isn’t the best for absorbing water.

What we really need is to develop a concrete that can absorb water and can grow grass on. Call me crazy but I think it can be done. What is DSA?

DSA isn't really socialist when big development co-opts socialism for their own good. Look at Housing Rights Initiative which has had DSA members as interns and New Leaders Council which has DSA members in it. Both Housing Rights Initiative and New Leaders Council's board includes Mitchell Draizin, who was involved in the mortgage lending industry and has a house in Sag Harbor. Do you think some wealthy guy who made his money in the mortgage industry, has a house in Sag Harbor and is involved in philanthropy (which in general is nothing more than wealthy folks boosting their egos) gives a fuck about the common person? Hell no.

Lots of converted houses with illegal apartments in Woodhaven…maybe if they closed those illegal apartments and got the tenants and their cars out there would be room for parking. Or we could just wait for inevitable fire/disaster to expose the condition and ask “how could this have happened?”

If you are going to move to NYC or buy something here. Make sure you have 1 or 2 spaces with your name on it BEFORE you even think of putting down a deposit.

Is that Token in the front row?

I still don't know what DSA is. Maybe one of those Neo Fascists' Liberal Groups like Working Family's Party, with a nice name and bizarre work environments.

How do you know if they identify as white ? Did you ask ?

Liberals can be facist. Look at how faux progressives like Mitchell Draizin, Aaron Carr and Cea Weaver are patsies for big corporate interests. They want to take away our right to own personal property and be subjugated and controlled by big corporations. The social housing their advocacy will get us is non-profit industrial complex, venture capital and corporate housing.

news after news, year after year, and yet people continue to vote Democrats....

@“ Anonymous said...
news after news, year after year, and yet people continue to vote Democrats....”

If the Republicans weren’t anti science, anti woman with a brain , and so pro corporation, the Sheeple would vote for them.

At least the GOP won't take away 1 or 2 family homes and tell me that I should allow overdevelopment unless I want to be seen as a racist.