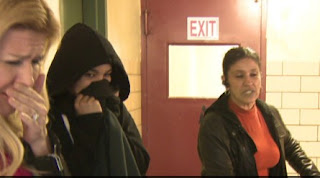 Janice Rodriguez says the smell inside the Pomonok Houses where she lives with her children is unbearable.

"It's smells like raw sewage in our lobby, in our elevator, in our hallways, and even inside our homes," said Rodriguez.

Rodriguez says she worries for the dozens of families who live inside the city complex, including her grandchildren.

A spokesperson says,"This situation is unacceptable and our residents deserve better. This morning, the clogged sewer line was cleared and the area was disinfected.”
Posted by Queens Crapper at 2:30 AM

Sad to hear this. Unfortunately you won't see much action on this issue because the mainstream news doesn't care about stories like this, they only go for tabloid like news and not issues relevant to ordinary citizens. Its part of the reason why the mainstream media has lost much of its credibility in the eyes of the public, still they got plenty of influence.
The same MSM told the masses that a wealthy wife of a former President is looking out for the needs of the masses, but at the same time they convinced millions that a billionaire jet set type was for the working class. We are truly in a sad point in America today.

Get used to the stench, everyone——it's what 300% false, fake and monstrously failed political leadership smells like——and, it's permeating Queens to gag reflex effect!

Why would anyone do that?

They flush chicken bones, cloth towels, rice, cooking oil, cat litter, their undershorts, hypodermic needles, sanitary napkins, household garbage, dead animals, dead babies and much more down the drain on a regular basis. There is a certain part of our population that does not know the difference between a garbage can and their toilet. Having said all of this only in government run housing would it require a news expose to get overflowing sewage to be cleaned up in an apt building.

This proves that this city, as in other cities when it comes to housing needs of the less and non-affluent, is the biggest slumlord of all. And the recent rumblings of relying on the predatory developers for aid by providing subsidized market rate housing only proves that nothing will ever improve the environment and the infrastructure of the projects, as they are letting them rot in hopes to drive the working poor out.

Mayor De Faustio and Shoya Oyoltae are blatantly exploiting the budgetary threat cuts from Figurehead Trump with the same fervor of accusing him of the rise of hate crimes to justify this maddening proposal.

AN INEFFECTIVE HOUSING AUTHORITY IS TO BLAME. GOOD JOB MONICA !!

Why you think white working class and middle class have been leaving New York in droves over the past several decades? Even to places where salaries are lower? Its because even if you earn 15 to 20 percent more, it does not mean much when your cost of living is 200 to 300 percent higher.
Particularly in the last 20, they have left the Northeast. Its because this city does not give a flying crap about ordinary folks. The only people coming here are immigrants from third world countries, and many of them
are not integrating into America, so these neighborhoods have become ethnic ghettos. Sure a few are successful, the vast majority are not, they could not care less because that is how things are done in their homelands.
Sure New York is the "Greatest City on Earth", but really look around, its a borderline third world country within America, rich are ultra rich, everyone else's portion of the pie getting smaller, also a government that likes to keep the status quo.

There is a great concise book about gentrification, How to kill a city, that everyone should check out about the origins of white flight and the tactics of the gentrification industrial complex of government and private equity on remaking and remodeling cities at the expense and disenfranchisement of long time and generational residents.

This is happening here. Except this time, it's happening to all races.