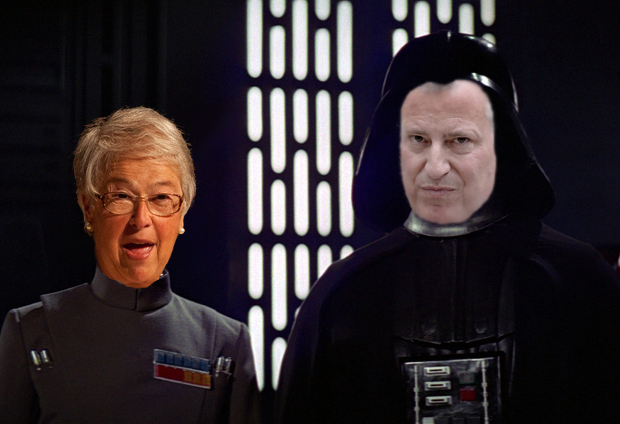 Well I have been getting a flood of emails from parents of kids who applied to get in to Maspeth High School this September. So far it's been confirmed that NONE of the kids attending parochial schools in the community board 5 area were accepted to the school and those monitoring the situation are having trouble finding public school kids who got in as well. When the school was built, there was controversy over it in part because the DOE would not guarantee admission to local kids. They did say that the school would take students who reside within school district 24 before accepting kids from outside of it. Maspeth, Middle Village, Glendale and Ridgewood are part of district 24 along with Elmhurst and Corona. Although the DOE claims it chooses the students by lottery it seems implausible that every kid within CB5 would be so unlucky.

Has this happened at high schools in any other community or is this another form of retribution from de Blasio?
Posted by Queens Crapper at 12:57 AM

PS/IS 119 in Glendale sending only 5 kids to Maspeth. Two of them had over 30 absences last year... not a good predictor for success. 45 other kids did not get matched to a high school.

This is what the Government gives you for OVER TWENTY THOUSAND DOLLARS per student per year.

If only they had more money.

I know, we must raise all taxes!!!

There is a plot afoot to reject the smarter kids at this school so they are forced to go to Grover Cleveland and improve that one, which has been threatened with closure. The thing is that most parents would rather lose an arm than send kids there and that means Catholic high schools are going to see more students.

The Maspeth Homeless shelter and the proposed Glendale shelter.
Paybacks are a bitch.

They see what happens and still they vote Democrat?!?!

Isn't that the definition of insanity, doing the same thing repeatedly and expecting a different result?

Democrat control of the schools led to this. High cost, minimal results. The pockets of the teacher's union lined with our tax dollars.

Charter schools attacked by the Democrats.

The future is bleak.

They LIE!! Maspeth High School will be for Maspeth residents..LIE!! City Council Elizabeth Crowley is one of the biggest liars and any administrator that tells you about a LOTTERY is a liar!! There is "NO LOTTERY"!! The school administrators know exactly which students will be offered admittance..they pick and choose! It has been happening the last few years since Maspeth HS opened..taking students from outside the CB. Offering admittance to students that don't even pick Maspeth HS..trying to force high academic students to the worst failing schools..

There is NO LOTTERY!!

I've seen some fundraising efforts from this Public School. They can't take our kids, we can't open our wallets!


But they are stupid and know only how to vote :D: in November, and have all sorts of needs that the party has programs to help.

That is all party boss Joe "Cruely" cares about. Stupid people.

Simple solution: Dont vote for Dibl-ASS-io in the next election !!

New York schools out rank many schools from Republican cities and states.
This can possible be the reason.

>>Democrat control of the schools led to this.

""No education, no learning of habits to succeed in society""

That's EXACTLY how democrats want them, stupid, obedient and dependent on the government for live. We already have this social engineering in places like New Orleans, Oakland, Kingston, Los Angeles and have learned absolutely NOTHING form it.

To add they don't want the "smart kids" because NYC schools now must dumb things down to get these children of illegal immigrants graduated to make room for more.
To add like in the home country's a good 25% of the females usually drop out due to teen pregnancy and will continue having children till menopause. The cycle then repeats itself.
New York City is finished, it will be so overpopulated, crime ridden and absolutely unbearable in 10 years.

Now with that progressive bastard DeBlasio possibly cruising to a re-election its time to get out !

"They see what happens and still they vote Democrat?!?!"

This is the fault of the Queens County Republicans: Morons who can't unify and would rather be at each other's throats than win elective office.

Where is your elected representatives - community board - local press - hiding under tables talking to developers and taking bribes er donations and ads?

Stop bitching to the choir.

Go to their offices and demand to talk to them. Take video devices. Post it to social media. Stop wasting your time and DO SOMETHING useful dammnit!

Do you even have kids in school?
I do, and things are not dumb-ed down.

>> To add they don't want the "smart kids" because NYC schools now must dumb things down to >> get these children of illegal immigrants graduated to make room for more.

Considering the data shows NYC continues to have less crime and a more affluent, educated population, I would say you are not correct. Expect that it will be "overpopulated"..whatever that means. It is surely not finished.

>>New York City is finished, it will be so overpopulated, crime ridden and absolutely >> unbearable in 10 years.

""Go to their offices and demand to talk to them""
Thats the truth, problem is aside those angry hornets in Maspeth people have no balls many more interested in watching ballgame's. The old "oh stop, that will never happen" attitude.

Sheeple refuse to shake a leg (and some vocal cords) and dont do shit do until
#1 The wolfs are at the front.
#2 Something's about to directly cost them big $$.
Effing idiots, perhaps this is what the white middle class in Queens deserve for re-electing the same known name idiots over and over.

Speaking of: Does the back stabbing liar Liz Crowley still wear the blue pool table cover to every meeting and have her crazy sister cheering her on and fighting with people ?
--Very Nice legacy

I'm sure Brian Barnwell will fix this! LOL

or Jimmy Van Bramer for that matter -

Never understood why the kids of Maspeth can not go to this high school. Schools already have shelter kids in them. Schools are overcrowded.
Keep over developing the areas and schools pay for it.

A similar "LOTTERY" was invoked by CSD25 in 1987,to the present,@ PS130Q formerly K-6 in Auburndale/Bayside FLB/@201ST.90% of the pupils were bused in from MainSt.,Flushing,which made a 90% Caucasian residence area Force Bused to PS'S one mile away.Residents living across the street from the school were denied seats in the new K-3 school. Property values may have decreased.Parents moved away for more school choice freedom,rather than bus their child or car pool.

Vote out all Crowleys

What are licensing requirements for "boarding schools" and "guardians" of small children? Surely there must be some Department of Health and Mental Hygiene requirements such as those for Day Care Centers??

Department of Buildings and Building Code requirements for living spaces for children??

people should go and look in to see what they can do to get there kids in going forward.and stop the anonymous nasty comments about they only except low grade and busing in kids from other neighborhood and they have all the seats out to homeless shelters.they bus in district 75 kids there in all schools nothing to do with maspeth high.

Yeah but that's the truth.
Obama made some kind of law that simply says if you neighborhood or school Is "to white" it must be smashed up and mixed. Not only that, the teachers must teach multicultural things. American history & culture is at the top of the cull list, many things like the Texas Revolution and the Alamo are actually banned.
Math & science are also on the way out.

Its really messed up people here are not making this stuff up. The progressive liberals really want to destroy, bury and erase the America everybody born here over age 40 loves.

"Do you even have kids in school? I do, and things are not dumb-ed down"

Had a girlfriend who was a Queens school teacher (her name was Aimee) You had to see what the city was putting her through. The were actually sending here to classes to teach this new "multicultural stuff" she had all these weird books they would grade her in. She was so disgusted with told how to be a babysitter, diplomat and security guard she quit and is now a successful caterer.

If you don't believe things are being dumbed down you better wake up fast and smell the coffee.

"Never understood why the kids of Maspeth can not go to this high school. Schools already have shelter kids in them."

The shelter kids get preference in schools

PROOF !!
24# of kids in out schools are from households of illegal immigrants, as in parents who don't give a shit only interested in free stuff and sending $$ back to Mexico to bring up more !!. Oh, And females as young as 14 are encouraged to get pregnant and repeat the process in that shitty culture !!

Preet was fired so he can appear independent when he runs

Metro HS next to Trader Joe a terrible school My girlfriends kid is a senior there. Only 50 % of the seniors are graduating this year. They had to change the graduation venue from St Johns to Christ the King because the graduating class is so small.