Hey, Eric, it's time to sh*t or get off the pot 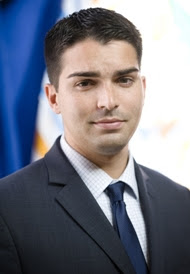 Only one of the four contenders to appear at the Columbia University College Republicans’ mayoral primary forum have yet to announce his candidacy—Queens Councilman Eric Ulrich, who promised reporters afterward he was “very close to making a decision.”

In his opening statement, Ulrich claimed that he was weighing a run because Mayor Bill de Blasio, a liberal Democrat, does not appear to be interested in the job. The councilman, who is eligible for another four-year term representing Howard Beach and parts of the Rockaways, has raised just short of $52,000 in a committee for undeclared office—some of it with the help of Ohio Gov. John Kasich, whom Ulrich backed in New York’s primary last April.

“It’s the million dollar question, right?” Ulrich admitted to the press. “I haven’t made a decision yet. I’m very close to making a decision and I should have an announcement soon, but I’m still considering a run for mayor because I’m concerned about the future of the city and because I do believe that Bill de Blasio can be beaten.”

Is he still doing his documentary?

The thing is, out of the other four candidates, he is the best one, having longer experience in office than the other novices and being younger. And his strongest candidate, Paul Massey, is a REBNY overlord that has suddenly embraced a populist stand stating the obvious about our current corrupt teflon mayor.

If Eric calls for the legalization of marijuana and prison time for repeat offenses by the city enabled slumlords, intrusive lobbyists and predator developers, then he gets my vote.

Wearing those silly looking bow ties and eyeglasses, this kid is not serious enough to be mayor. Take a walk, Ulrich.

Being part of the reality TV show distracts him, both from work and from his possible campaign as Mayor.

This clown just has his hand out and isn't serious about running, only lining his pockets!

This is one of the best Republican's have to offer ?
Why cant Avella become a Republican and run (after all, democrats are all fulla shit, all of them) Avella may have a chance ?
Anybody is an improvement then this this crooked, drugged up Marxist piece of shit we have now !!

To JQ: Alas, One of Queens County's most disgraced elected (by lowest voter turnout, no less!), is Derelict Dullrich, who can't even maintain the position-by-default that he now disgracefully occupies! Case in point: Since 2009, I've personally known this pitiful pipsqueak (and bought and paid for schlepper and low level hustler), and between himself and his 'Friends & Family' payroll, they all give mendacity a bad name, as they continue to DEVALUE all honesty itself——to pathologically traitorous effect——and, the constituency be damned (again and STILL)!

Worse, the Queens Chronicle profiled a story about me in 2010 that Shithead Ulrich could have easily helped me with, as a constituent. Instead, I got the door slammed in my face (repeatedly), and the full taxation without representation treatment, as Ulrich's former criminal chief-of-staff Bart Haggerty slammed the phone in my ear, followed by a lackey named Arlene Brown, who cluelessly jerked me around with endless bullshit in order to wear me down——and, then the death threats followed from the Queens Chronicle's equally disgraced Editor in Chief, Peter Mastrosimone, when I complained about Ulrich's laziness, dismissiveness and dereliction of public duty.

Then, a pseudo reporter from the paper named Anna Gustafsson interviewed me on September 30, 2010 (with a witness present), and the story never appeared in print as a followup to the original profile (that was honestly and fairly written a year earlier by Bryan Yurcan). And, despite how Gustafsson herself told me that the story would appear in the next edition (October 7, 2010), she repeatedly lied about it when I complained that the story never appeared, week after week——and, all because this rag refused to hold both Ulrich and Addabbo, Jr. accountable to one of their constituents in obvious need——and with a verifiable story of truth, fact, evidence and proof that was continually rejected and covered up by The Chronicle, and its totally mendacious staff of politically bought henchmen.

To Anonymous No. 6 (note the Prisoner reference)

You need not worry, I am aware of Mr. Ulrich and your spot on description of him. His recent statements regarding Mayor Big Slow are just stating the obvious. And my proposals are just facetious, because of his current fence straddling, is a big tell that he can't stick to his convictions and

It's a damn shame, because someone who started so young in politics should have more enthusiasm and drive.

Not a chance in HEll

To fifth Anonymous from the bottom who said: ❝Wearing those silly looking bow ties and eyeglasses, this kid is not serious enough to be mayor. Take a walk, Ulrich.❞

So, if you think that those laughably arrogant bow ties (that look like they can light up with the flick of a switch!), and 'counterfeit intellectual' eyewear are silly (that 'Derelict Dullrich' parades about town in for many of his exclusionary Queens balls, galas and exalted, Queens Chronicle, photo op-ready ribbon cutting ceremonies), then you haven't met this cheap, Ozone Park hustler's taxpayer-funded, 'Friends & Family,' city payroll staff, my friend, all of whom can suspend all cognitive function at will——where lunch and a manicure is ALWAYS a stressful day——and, now replete with a 32% pay bump, compliments of the greatest mayoral failure of them all——Chief Shithead Bill de Assio, an embarassment to primates worldwide!

In fact, the only people who still live in Queens County who haven't been ravaged, duped, bilked, scammed, damned and betrayed by all intensely incompetent, monstrously self-serving politicians (not public servants!), are the 'crooked-and-corrupt,' entrenched, establishment-rigged, party-machine-failed politicians themselves! And, your tax dollars just involuntarily hiked the pay of these empowered idiots in the entire city council by a whopping, unconscionable 32% that YOU, the eternally hemorrhaging taxpayer, have never received in your entire lifetime of pay raises——COMBINED!

That's why I call ALL of the OPENLY PRACTICING thieves in Queens politics: 'CRIMES WITHOUT CRIMINALS!'

Get off the pot....unelectable in this city of REBNY!

His office lackeys are all bums who are disrespectful to constituents.

Let Ulrich run for mayor. It's God's way of taking his ill gotten money from him.

To last Anonymous: Tell your grandma to vet her enemies in plain sight better; or maybe she just falls for 'Count Chocula's' pseudo intellectual'look' that says to everyone else: All taters and no meat; all grizzle and fat, and no beef (the beef is in his wallet--compliments of 'Joe Schmuck taxpayer')!

Also, be sure to tell (actually, educate) Grandma that when it comes to ethics and moral conduct, this lowlife scores at lowest rank in Queens County among his equally revolting peers, and anyone can find the data that reveals this cheap hustler's REAL contempt for his ever languishing constituents online. Worse, his office of obvious, intensely incompetent 'stooges' have zero respect for any single constituent (exactly like Ulrich himself), in need of REAL help, in which everyone from the top down is totally incapable of delivering.

Finally, read the story about 'Little Red Riding Hood' to your grandma, and wake her up from her obvious sleepwalk about wolves in grandma apparel! They don't get any slimier (or swampier) than THIS total waste of skin (and his feckless staff), all of whom continue to deplete the Earth of precious oxygen, as they likewise continue to lie, cheat and steal--easier than they collectively breathe! Ulrich is 300% fake! And, as Anonymous above has beautifully (and truthfully) stated: He gives mendacity a bad name!

Eric, with his clown suit and his clown car, drinking all that warmed over spit!