Homeless are everywhere at Jamaica Center 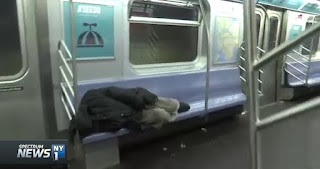 The effects of the city's growing problem of homelessness are not only being seen on the streets. There are also problems underground at one of the city's main subway terminals - the E train station at Jamaica Center/Parsons/Archer. NY1's Ruschell Boone reports.
Posted by Queens Crapper at 1:38 AM

This is an OLD problem, not a new one. It is particularly galling at the E's head/end: World Trade Center. Mrs Mayor should be ashamed.

So is this part of the revitalization of Jamaica? Is this the big plan coming from the Jamaica Now Action Plan? And you thought that most homeless on the street were black or white. Welcome our Bangladeshi homeless as can be seen in this video of a man who came to Jamaica Center to avoid the snow from last week and then decided to make Jamaica Center Station his new home.

Ironic this newscast has NOT one appearance of a local elected official from Jamaica, not even a sound bite. AND where is Queens BP Melinda "If its good for Queens, its good for families" Katz.

So hey homeless "COME ON DOWN to JAMAICA HOMELESS VILLAGE" where you can stay all day in the station, where you have full access to bathrooms and can ride the E train back and forth as long as you want.

In reality, This is the NEW JAMAICA. Forget all the bullshit of the Jamaica Now Action Plan or any type of revitalization.

THIS IS THE REALITY OF JAMAICA. But we folks in the know, already knew this, especially Jamaica resident and community activist Pamela Hazel who has been reporting on this for years to deaf ears. HEY, but Katz's famous catch phrase:

I just read Mayor Big Dope, raised the rent one of his rentals. Why doesn't he lead by example and put up a few homeless families or even better some homeless single men. Ha ha...Fucking guy owns multiple houses and has to live off the tax payers.

Enjoy 4 more years of this leach.

Someone has been living under the LIRR trestle on 165th Street between Archer and Liberty Avenues in Jamaica for the past few months. There's construction going on in that area, so maybe the construction workers are providing food, etc.

Is this a poetry contest?

There once was a man from Park Slope.
Whose personality was so lame he would mope.
He married a dyke.
Now he promotes citibike.
And everyone calls him the Big Dope.

How much do I win?

Just keep building towers and condos for the russian, chinese and indian money laundromants, and the frivolous spending hipshits.

IF CONTACTING YOUR LOCAL CITY COUNCIL REPRESENTATIVE HASN'T LED TO ANY ACTION THEN THE ONLY WAY IS TO GET THE MEDIA ON YOUR SIDE JUST LIKE THE RESIDENTS IN FLORAL PARK AND BELLEROSE DID LAST YEAR TO PREVENT ANOTHER HOMELESS SHELTER FROM SPRINGING UP IN THEIR COMMUNITY. WE ALL KNOW DIBLASIO HATES TO HAVE A MICROPHONE IN FRONT OF HIS FACE BUT THAT IS THE ONLY WAY TO SHAKE HIM AND FORCE HIM TO TAKE US RESIDENTS SERIOUSLY.


The condos are built for everyone. No one is stopping you from buying one.

DIVERSITY AND RAMMING IT DOWN OUR THROATS IS KILLING THE U.S. AT WHAT POINT WILL WE BE CONSIDERED FULLY DIVERSE? ARENT WE THERE YET

Last Thursday, March 16, 2017, I contacted the office of Gregory Meeks to register a complaint and to ask for help. Meeks employs a seriously arrogant and uneducated crony named Bob Simmons who rejected every reason that I, as a constituent, requested an appointment with this worthless politician (not public servant).

Because, I was getting psychopbabble from Simmons, I ended up hanging up the telephone on this failed public servant. Shouldn't there be a consequence to representatives who willfully reject and dismiss their constituents' needs, wants and concerns? Where is the accountabilitiy and transparency?

As usual, the blighted problem that I am experiencing continues to exist, and these depraved, politically toxic subhumans get away with murder on my tax dollars. The people (and I use the term loosely) in this hustler's office make hell look like heaven!


Mostly white and black homeless people and Donald Trump wants to kick out the ones and only back breakers that do the jobs no one else wants to do.

Have you seen Koreans, Indians, Jews,... working in midtown Manhattan cooking, washing dishes, delivering food, carrying bricks (without union benefits and protection), and so on and so forth?

They need the homeless for agencies like Dept of Homeless Services - so called case workers, eligibility specialists, supervisors of all of these people, security guards and Dept of Homeless Services Police force can keep getting their fat paychecks. What would all these union represented people do with out the homeless? oh yes I forget the union administration workers and union reps, they get salaries, too. And benefits. The homeless problem is created on purpose starting in NYC Housing Court.

A large percentage of these unfortunates are either suffering from TBI, Traumatic Brain Injury or are Developmentally Disabled, what used to be called retarded. Older people with these maladies are not cute. Maybe they never were poster children to begin with.

They self medicate with drugs and alcohol. Who wouldn't in those conditions? And this is why I stopped giving change to those who solicit funds on the subway. Hint, Transit police- how about arresting people for selling and soliciting on the subway, on platforms and in the tunnels? They would all get the message after a couple of months. You can start with the black man on the A train who sells nutcrackers- alcohol laced fruit punch, child porn dvds, loose cigarettes and marijuana out of a rolling black suitcase. He is very aggressive and demands that no one looks out the window or looks at their phone or book while he is selling.

I blame the lazy incompetent employees at HRA Human Resources Administration (Steven Banks is the commissioner) - what you know as welfare- for this problem. Most if not all of the homeless are eligible for benefits or Social Security Disability. If anyone bothered to investigate there may be some homeless who have active cases but have payees that are stealing their money.

As for those who come from other countries or states to get the lavish (as compared to their state's) welfare benefits, ship them back to their country or state of origin.

Why not bring teams of HRA workers to the homeless instead of the homeless having to travel to the welfare offices?

There is technology now that can do this. The FEMA workers after Hurricane Sandy traveled to people, we were not expected to go to any office.


They're not able to take care of themselves. Why aren't guardians appointed for them? This is what happens when they close places like Creedmore and have no where for the patients to go.

For those of you that are to young or don't remember, please see Billie Boggs. https://en.m.wikipedia.org/wiki/Joyce_Patricia_Brown

Diversity: codeword for increased crime and lower quality of life. Diversity never improved anything except for gourmet foods and professional sports.

Yep, your looking at all the future hipshit artists & snowflakes. The trust funds and government grants for art are running out. A million or more will be coming to NY soon so get used to it or MOVE.
God help anybody trying to get Medicaid or help in an emergency room in this state, because things are going to horrible beyond anything we seen under another term with the mentally ill drug addict mayor.

In defense of hipsters-- I think even they have a limit of how much urine and solid human waste they care to step over in the subway every morning, before they pack up and leave for another city.

E train has always been infamous for the homeless and deranged. Huge attraction for some reason. Jamaica and archer and that new station is just scary, a fairly new station, that is falling apart already, and you can feel the danger in the air!

The future homeless Hipsters come here for the art bullshit and free stuff.
I cant believe these people can place hot tubs on roofs, get naked & show flicks and get government $$ for it under the guise of "art" They are all gonna be unemployed & homeless democrats looking for a place to land for life !!
If you do history on the current homeless on the streets a good 1/3 of them were self titled artists & musicians. Many had useless liberal science & are degrees, a littlr depression, drugs, booze. The hipsters today are making the same mistake only its worst because they feel entitled to everything (by force & protest if needed) want socialism and believe what I studied and work hard for should be shared with them.

No doubt bigger homeless trouble is coming when Trump turns the money spigot off. Gotta get some tall flood boots because deep shit is coming. Like that movie "Escape From New York" with Kurt Russell only for REAL !!

Jamaica : NY's hot new neighborhood. Why doesn't the QB President do something about this? She has nothing to say? This is not good for Queens or our families! It's her backyard!

AGAIN, GET THE MEDIA ON YOUR SIDE. THERE IS NOTHING MORE THAT A POLITICIAN HATES THAN A REPORTER DESTINED TO GET SOME ANSWERS. ANDREW SIFF IS REALLY GOOD!!