NYC may stop getting some federal funds 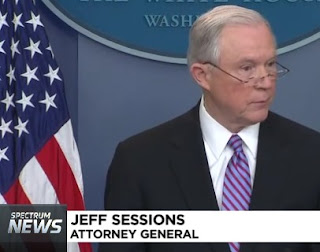 The Trump administration is increasingly warning that if local law enforcement agencies don't cooperate with federal immigration officials, they could lose federal funding.

"A nation without borders is not a nation," Trump said.

It's been a Trump policy, signed in January in an executive order.

Attention lately is heightened after two Maryland high school students, including one here without papers, were accused of raping a classmate in a school bathroom. Henry Sanchez-Milian's lawyer says he is pleading not guilty.

Maryland lawmakers are considering a bill restricting how much local law enforcement can share with federal agencies.

"I would plead with the people of Maryland to understand that this makes the state of Maryland more at risk for violence and crime," Sessions said.

New York's rules limit cooperation with immigration agents. They don't end it. And its backers add the rules aren't just constitutionally sound, but make the city about the safest its been in generations.

Taking away federal funding jeopardizes that, they say. Not to mention, some of that money Trump is threatening to take helps protect his namesake tower.
Posted by Queens Crapper at 7:39 AM

Imagine having the balls to think you can pick and choose what Federal laws should be enforced.

Can't these liberals even agree that if an illegal commits a violent crime they should be deported? Why does my tax money have to go to keeping them in this country?

These politicians are vultures feeding on the carrion of the taxpayer.

For years the feds have been gaining influence in local politics by funding things that were not considered their purview. Just consider the growth in influence of the DOE and the EPA. Even the most minor thing is "influenced" by the feds.

Now the shoe is on the other foot.

They should withhold all federal funds.The mayor has tried for a long time to bring about social equality but it cannot be forced on us. We are a different kind of people. We need enforcement of our laws and from time to time reform if necessary. Diversity is a good thing but it should not mean that no laws (especially federal laws) should be ignored. The biggest challenge to this city's continuing growth is the mayor's radical utopian fantasy of making NYC more like Amsterdam, Copenhagen. DI BLASIO NEEDS TO BE VOTED OUT !!

I love this city but I absolutely agree with the administration on this one, funds should be withheld. This is not a sanctuary for illegals, and shame on de Bozo for so blatantly trying to hide illegals and further destroy this great city.

This from an orange clown who refuses to pay his own taxes.

I could give a fuck about this race-based, redneck, lunatic policy.

All you idiots cheering him should be wondering where all that infrastructure funding he promised is, and why he thinks taking away NYPD anti-terrorism funding is acceptable politics? Guess what? It isn't. I don't give a fuck who is running what city. This is not a negotiation. Our fucking tax dollars paid for these services.

Bravo! Bring it on!

Unknown said...
This comment has been removed by the author.
Tuesday, March 28, 2017

NYC tax paying citizens can protect their loveones by clicking on IMMIGRATION PAUSE.ORG

Mainstream media,nypd in a SANCTUARY CITY.COUNTY will not identify a criminal alien.
Do you really know which of the many crimes in NYC are committed by Illegal aliens ?

Is that GOOD OR BAD for the Citizens?

A/G/J.SESSIONS is a PATRIOT.I observed his stlye on Sen.Comm. the past years.He is pro-American. and can be trusted to do the right thing for 63 millions ,who voted in in 2016. the other voters believing the LEFT/Communist propaganda will see his acts as good for them and their families.

The question is, how do you enforce it so that you save face politically?

As interest rises, Hillary voters will live in municipalities whose bonds are broke

You poor snowflake. Hillary was supposed to win not Trump. So Putin was focused on Hillary who by the way sold uranium to the Russians. The golden shower incident is an invention of the Arkansas mob that surrounded Hillary and their democratic operatives.
Maybe Hillary got Donald confused with her husband the sexual predator.
As for funding, nobody gets to choose what federal laws get respected and what laws get ignored. Hopefully all these neoliberal mayors and their gangs will get arrested and go away for a while. Taking taxpayer monies and funding your illegal alien voting base with EBT, Obamacare and etc is no longer an option. Comprende snowflake?

All you idiots cheering him

Actually the only idiot here is you. Big time idiot. Or maybe a paid shill?

Who in their right mind can expect a nation to survive if it doesn't have an immigration policy that can be controlled? Do these people who want open borders, come one come all ever think of the consequences of this. Sanctuary cities are only encouraging more people to break the law.

So law and order is now a redneck, lunatic policy? Were you screaming when Obama wanted to slash $90M from NYC's terror funding last year? Do some research on Uranium One to see which politician (Secretary Clinton) was lifting her skirt for Russia and urinating on whom (the American people).

If illegals don't have to obay the law then neither do I,therefore my illegal and undocumented firearms are none of the governments business
Mayor DiBozo would agree.

This will backfire and fail like everything this malicious administration, which by last count I think it was around 130 cabinet members which is just 1/5th of the positions filled. It will fail like the two travel bans on religion and the moronic health care plan, which reportedly plagiarized the bulk of "Obama"care.

I don't think withholding funding from states with sanctuary city programs is a good idea, which is basically government blackmail, and is more likely to be counterproductive. It seems like it would actually cost more tax dollars in the long run with cases in court, hunting these people through.

Mostly, this is going to make heroes of the worst elected officials representing this city for their consistent stand against the Figurehead's immigration policies. People like Mario's son, Mayor Big Slow, Lobbyist whore Schumer, Missy Varvato, and Jimbrowski Von Bramer. This will just empower them more, as if Trump didn't already do de Faustio a favor by firing Preet.

I assure the readers here that I do not want recidivist criminal illegal immigrants here, nor do I condone immigrants who refuse to go through the proper channels to citizenship. But consider the fact, that this guy, Jefferson Sessions, perjured himself at the confirmation hearings. This hayseed weasel belongs in prison.

The money lost will be made up by raising our taxes !
Wait and see people New York City will tax your feet before it gives in to Trump !

Do tell.What failed? the man is keeping his promises whether you like it or not.
Same goes for the media whores, 98% of them donated to the Clinton campaign, leaked questions for the debate, need to go on? Preet had a chance to put Bozo away, but being Schumer's boy he choose not to.
Jeff Sessions perjured himself? Really? Based on your standards half of the democrats belong to jail inclusing the previous guy who ruined this country for his globalist friends.
As far as taxes going up, Bozo already took care of that, property taxes are up, water bills are up, Con Ed bills are up (the city gets a cut here) and the subway fares just went up. Like Bozo needed an excuse to pay for his socialist vision.
Allowing illegal immigrants in, is a dangerous game.
Didn't we learn our lessons on 9/11?
Seems the democrats are trying to increase their voting base - NYC, Chicago, California major centers for this type of activity.
We all need to respect the laws if we are to have a functioning society.
For the good news, President Trump is bound by term limits, how about members of Congress and the Senate? Some of them are there for decades, some of them even die in office. That's where you need to look if you want to blame someone.

With hold the Federal funds and save money by terminating illegal aliens and convicted felons who work for the City of New York, fire the ones who work for HRA. They don't go any work. These are the true parasites of New York.

Here is the plan.. You can have sanctuary cities but YOU have to pay for it.

Any welfare food stamps medicaid section 8 refugee expenses all hospital bills that you cannot collect on money to educate illegals, all paid by NYC residents, yup raise your taxes

just dont ask the rest of the country to pay for it..

deBlas has the attitude of "we'll see you in court" must stop. He and the other Sanctuary City mayors are even having a NYC hosted conference to plot how to userp the Federal law (who's paying for that?). The Attorney General should have them all arrested for aiding and abetting criminals and maybe on Rico statutes. Then we'll see deBlas in court.

Agreed!
Or stupid people who live in dreamland. Reality is, jobs were outsourced (ever been to India snowflakes?), people live off government handoffs just like in a socialist utopia. This is not what America is about.
Then the same people come here and complain about corruption in NYC.
Like the guy who built his house in the ocean and complains about water in the living room.

Really pathetic if you ask me.

Watch this and come tell us why President Trump is wrong:

People actually voted for this crazy person? Her goal is that President Trump will not remain President.