End of the road for the LIC Elks Club 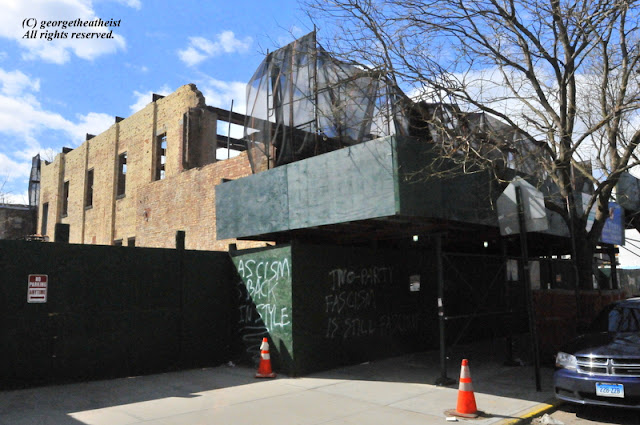 Photo by George the Atheist 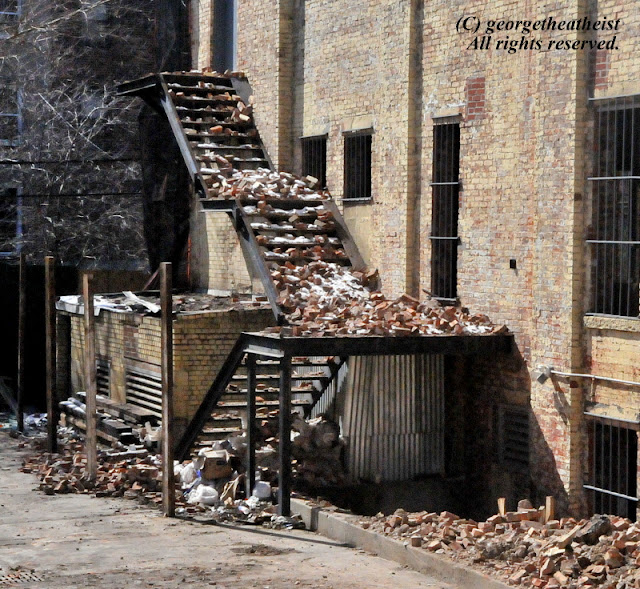 There is no respect for the character and history of LIC, or the rest of Queens. The first option should be a creative re-use. I assume that there was an auditorium that could have hosted a theatre group. But even when the building can't be reused, can't they at least incorporate the historic facade into the design?

At least we have some pictures...

Bitter community residents claim that this can directly be linked with Van Bramer cherry picking people the needed money for their programs to 'disappear' so the community's initiative falters and fails.

During the meeting at the historical society one person suggested that perhaps 'a half dozen people meet with Van Bramer to discuss this building.' That same person is now crowing the largess of Van Bramer for their projects.

More than one commented on Van Bramer's staff targeting certain people during the rally where he made empty promises to the community. They said that watching that well oiled machine, that normally is MIA on fighting developers, was a sight to behold.

Yes, folks, this should have never happened. We can now put to bed this issue that Jimmy is a patron of the arts or a fighter for his community.

But look at the good from this.

Those that benefited this year will undoubtedly be tossed back into the mud for next year year's budget. Someone running for mayor will expand funding for organizations that are across the city, and not in his neighborhood.

And although some will go home tail between their legs from the mantra 'you cannot beat city hall' others will know what happened and be wise to the next time something like this comes down the block.

"Fool me once, shame on me, fool me twice, shame on you." We have the internet people, and stunts like this will become impossible soon.

This could have been a community center run by the community. Now they have scraps of a few thousand feet here and their where new development is measured in millions of sq feet, and the ponderous agendas of the library programs that echo the worst of Official Culture that the Soviets once crammed down the throats of increasingly resentful peasants.

Brave New World is alive and well in Fascist Queens.

the landmarks law is a joke and should be overturned. This building was put up by a first rate architect and was a cultural location.

Any program that uses public funds, and is denied to a community should be shut down.

A developer that wants to challenge the law on that basis will have plenty of support from about 90% of the city.

Alas, I wish that we could destroy all politicians with the same speed and efficiency that they endeavor to destroy our precious jewels of New York history past. They suck the life out of everything and everyone in this already ravaged and tonsured city, where the only things left for the locusts, I mean all consuming tourists will be Marriott boutique hotels in the Garment District, nail salons, food courts and outlets and all LEGALLY organized corruption, graft and greed.

Now, New York is just a hollow, nihilistic sphere for even hollower, more nihilistic people. Thank goodness for pictures, then. Because, the business of life is the acquisition of memories. In the end (like right now), that's all there is. . .

This would have been a major tourist attraction with info on the borough, community space, exhibits and events - with great access to Manhattan as well as Brooklyn. Would have never happened in Brooklyn or Manhattan where neighbors work together and fight for their community.

Not sure what is worse, (1) Jimmy Van Bramer, (2) the fools he seduced or (3) the community that just stood back and let (1) and (2) walk all over them - especially when they had clear alternatives laid at their feet and did not lift a finger to stop this. I doubt they even learned anything from this. This is a community that has lost its soul, prone, dead, awaiting the bulldozers to scoop them up for landfill.

No pity. They did this to themselves and got what they deserve. Interesting that no one from LIC took these pictures. I guess they hoped their inept mistake would be carted away and purged from memory.

No such luck. Lets hope other people can take out these pictures and stare at them long and hard ... and other communities can learn from this pointless mistake.

Alas, I wish that we could destroy all politicians with the same speed and efficiency that they endeavor to destroy our precious jewels of New York history past.Now, New York is just a hollow, nihilistic sphere for even hollower, more nihilistic people. Thank goodness for pictures, then

-----
Not true. This is not typical NY. Most areas of the city still have some pride in themselves and their community.

I agree that this was self-inflicted and destroyed by the residents of Hunters Pt. Their politician is a local that shared their Queens Values. No one from outside their community did this.

What the hell did the community do in the past year - roll over and play dead?

At least two people from LIC have been posting photos of the elks lodge demo on twitter for literally months now. No one pays attention though.

"At least two people from LIC have been posting photos of the elks lodge demo on twitter for literally months now. No one pays attention though."

That's because you gotta post on the what's-happening go-to site: Queens Crap.

Really? Don't get out much from Queens, don't you? It is possible for communities and non-profits to run things without everything being hijacked by the state and promulgating the propaganda of the state party apparatus, as is the case of the Queens Library, Queens Museum, Queens Theater, and the performance spaces at places like Queen College.

Substitute the word 'Queens' with 'The Peoples' and you start to get a grip on the suffocating fascist state the Democratic Party of Queens has made of the borough.

Jimmy's Values - in the (Elk) Horns of a Dilemma:

We are still waiting for Jimmy to brief us on those empty promises he made in front of the Elks Building.

We do need a statement from his office on how this building slipped between the cracks, and even more importantly, about rumors that he met with community leaders behind everyone's backs and if so, any donations he made to their organizations with public monies which helped the plans of this notorious developer.

When he does run for mayor, you can be assured this mess will be dragged up again and again because (this might a shock to some of you) in many neighborhoods stuff like this is important.

NOTICE THAT NO QUEENS PAPER PICKED THIS UP.

BUT THEY DO COVER PAGE AFTER PAGE OF DEAR OLD ADDLED SENIORS EMBRACING BEAMING POLITICIANS THAT ENSURE THE COFFEE URN AT THEIR SENIOR CENTERS ARE ALWAYS FILLED.

please, just stop. people from queens always say this. the only sad thing is how you are shit on and come back the next day for a repeat performance never learning from your experience and making yourself beneath contempt and beyond pity.

that's what is sad.

Joseph Anastasio wrote in his book, '7 Line LIC' that the owner, Tryad Group was run by Leslie Westreich who was disbarred in 1995 for "dishonesty, fraud, deceit, misrepresentation and conversion of client funds." A 1999 NY Post article connects him to a notorious Manhattan slumlord Baruch Singer, stating that they were business partners.

On the morning of March 6, 2016, Tryad sent a crew to demolish the the terra-cotta work which his book called a "willful act of vandalism. Photos ... reveal numerous OSHA violations and complete lack of public safety... NYC government received at least 8 complaints."

"Tryad was slapped with $400 in fines, a slap on the wrist for a multi-million dollar company. As of October 1, 2016 they still had not paid this penalty."

Despite this background and behavior, and since Tryad was permitted to continue getting permits, Jimmy Van Bramer remained mute as the city continued to work with Mr Westrich.

Anyone want to spend some time looking up if campaign donations were made from any part of Tryad or associates to any elected official?

People, you were hosed.

Could all you "anonymous" posters please give yourselves an screen name, if you don't want to use your own? It is confusing to follow when there are bunch of people called the same thing.

That is some nice activist graffiti there. Although I think fascism never left, it's been subliminal.

I know the person that is doing the 'graffiti' and he was the same person showing people all the Nazi 'graffiti' at local parks trying to get an anti-trump row out of them. Note that all the 'graffiti' pretty much looks the same.

You guessed it. An underground Democratic Party operative trying to stir up the public that pro-Trump bogymen are running around tagging the city - which gives his buddies in the Party of Crowley the excuse that the fascists are now around the corner.

Which is kinda true, but hell, they have been dictating things to us for decades.

BTW, from reading this thread, Van Bramer and the Party goons are real corkers. Why are they protesting Trump? Trump went to grad school right here in his native Queens.

Supporting a slumlord by buying off select members of the community? Keeping the truth hidden as you manipulate the public? Making empty pointless promises to confuse and sidetrack your own constituents?

Any guess how much money might have been paid to make government an instrument of evil and harm for the people that pay for it?

I just discovered this site while trying to get better informed about the LIC rezoning issues.Comments are not only informative but sobering.As a working mother of a young child and also dealing w mult family issues(as many people are),I ask myself what can I do..I see people all around just trying to get through the day,who have neither the time or energy to do more.But through sites like these,we can at least be informed to a certain extent,and you know what?Maybe this not so involved mom can at least go to a community meeting,or call our elected officials,etc.Because it IS troubling,the "overdevelopment"& other issues raised here. Thank you and God bless you all.People who are reading can be inspired& informed,esp in dealing w future issues.