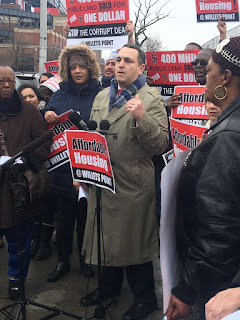 The controversial redevelopment plan of Willets Point, the Queens industrial area located in Corona, where mechanical repair shops and auto parts sales settled for many years, jumps another time into the headlines.

Corona, Jackson Heights and Elmhurst community groups and organizations such as The Black Institute and the East Elmhurst Corona Alliance held a press conference Tuesday stating that "The true Willets Point redevelopment project is being silently stolen from the community."

Following Mayor Bill de Blasio's proposed homeless housing plan and his desire to build affordable housing in New York City, community members in the areas surrounding Willets Points in Queens have teamed up to require that both Mayor and Area Council Member Julissa Ferreras enforce the original agreement detailed in the Willets Point redevelopment plan that included 5500 housing units and at the same time denounce the transfer of 23 acres of public property at Willets Point to a group of Queens planners.

"It is amazing that the mayor of Blasio has offered a plan to develop shelters and homes for homeless people ignoring an already approved plan that would bring 5500 housing units, of which 1,925 units would be permanently affordable," said ex-council member Hiram Monserrate.

...according to the activists, current local elected officials, the mayor and governor are supporting very different re-development plan than those that were approved. These new plans include expanding the project into more than 40 acres of a public park and prioritizing the construction of an unnecessary mega-shopping mall.

[Translated from Spanish so the grammar is not perfect but you get the idea.]
Posted by Queens Crapper at 6:02 AM

Has this man have no shame? He stole from taxpayers, beat his girlfriend, and lied to authorities. Go away Hiram. And a pox on anyone who supports this lowlife.

I know, I know you take help wherever you can get it, but aligning yourself with this mutant might be a serious tactical error...

Check out Hiram doing the populist thang. Well, at least he's embraced a righteous cause, although there will surely be skeptics who will be wary of his motives.

City planning is out of control right now. I am extremely curious and concerned who are all these people that they are subsidizing market rate apartment and luxury condo living for, when it's certain that there are more poor people and middle class struggling to stay afloat that need these dwellings more.

Hiram should look into some real issues in corona, like over developement and jobs.how many new chepo built apartments does corona need?

Hiram Monserrate is just a two bit thug who should be in jail. If he supports anything, that is reason enough to be against it.

Monserrate needs to crawl back under a rock.

The characterNewman from Seinfeld once called Jerry a 'Useless Postule'. Thats what these two bozo's Cuomo & Monserrate actually are !!

Why is this clown in the news, at all? Shouldn't he be hiding in some cave with anthony weiner or something?

His pizzeria shop in Corona is not doing so well.