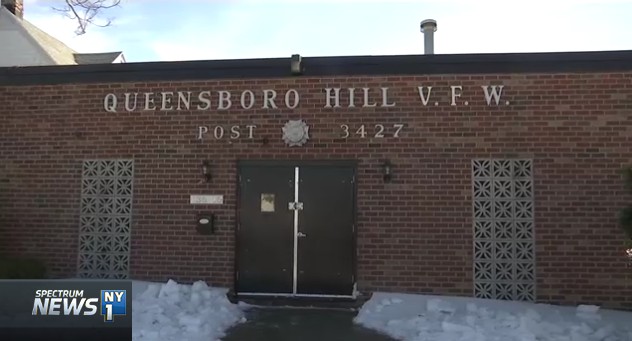 The group of veterans at the VFW post says it has tried to correct the violations, but do not receive proper guidance from building officials to clear the liens. They say the bureaucratic red is putting its post in jeopardy of closure.

Stuck in bureaucratic red tape, a group of veterans say they're being unfairly fined for building violations. So much so that their community center is in jeopardy of closing. During a press conference Monday, veterans at the Veterans of Foreign Wars Post 34-27 in Flushing say they feel like bureaucrats are attacking their post. The post has been dealing with building code violations for more than two years.

​"There is a lawless war being perpetrated against the veterans of new York city. And this post being fined out of existence is evidence of that war," says Marvin Jeffcoat, Sergeant First Class, U.S Army (Retired).

Building code violation fines have mounted against the VFW Post to the tune of $13,000.
Posted by Queens Crapper at 12:01 AM

""There is a lawless war being perpetrated against the veterans of new York city......."

Here is the crux of the matter: ".... their troubles with the Department of Buildings started when an energy-efficient water heater was installed in 2015. Records show that no permit was ever issued for the work. A spokesman for the department says the violations were major, including an illegal water heater installed without a permit, an unauthorized gas line, and that the work was did not meed code standards."

When you own a business or any organization you know about the fact that certain work requires a permit regardless of whether the new appliance is 'type approved" -or not.

These guy are typical smartasses who thought that they could just "get away with it", do it on-the-cheap. Well, no, not when there are real safety matters involved.

I am a business owner with multiple investments in restaurants. We deal with this shit almost every month in at least one of our locations. File the f'in permit via your contractor, do the work to code and you won't have this sort of problem.

There is a defined legal difference between "maintenance" and code-defined work. Replacing a toilet bowl is not the same as a boiler.

De Blasio to Veterans "Fuck You"

A majority of Veterans' establishments have been targeted AND SHUT DOWN over the years by this administration!

This is the thanks that they receive for serving this Country...

Please, let's recognize that this is case-by-case, and not paint with a broad brush. As Rob says, the rules are the rules - I am constantly amazed that the CONTRACTORS hang their customers out to dry (guess they target veterans too?)

We have a post in my neighborhood that is little more than a basement bar where the vets get sloshed. They support the bar by renting the upstairs for parties. The roof is falling in - visibly! and I understand from a former member that they have sticks holding it up in places. The DoB, however, has found no problems - guess that inspector declared peace with the vets, and war on the families celebrating christenings, graduations, weddings...

BTW, my husband is a decorated vet.

The VFW could have easily checked with Councilman Rory Lancman, who represents this property and is also a veteran. rory's office could look into which permits are missing and what needed to be done.

That's what constituent service is about, so use it.

Rob in Manhattan is right.

Since when do you need a permit for a new hot water heater? Is this a special commercial regulation?