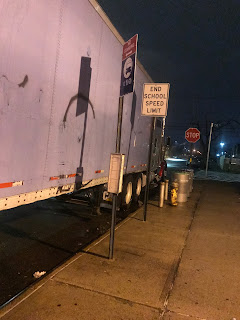 A southeast Queens City councilman is sponsoring legislation to reduce the time commercial trucks can park on streets from three hours to 90 minutes in an attempt to reduce the burden on affected communities.

City Councilman I. Daneek Miller (D-St. Albans) said that when he first broached the notion of Council legislation to combat the problem, he found other council members were dealing with similar situations in their own districts.

The preponderance of trucks blocking traffic and idling is a constant source of frustration for southeast Queens residents, both in the commercial corridors of downtown Jamaica and on residential avenues. Int. No. 1473 would revise the law to shorten the amount of time before traffic enforcers or NYPD officers can give an idling commercial vehicle a demand that they move or a fine. Miller said the vehicles are often idling overnight, running their engines for air conditioning in the summer or heat in the winter. Thus, the health of residents can be compromised.

The legislation was referred by the full Council to the Committee on Transportation and has garnered several sponsors, including Queens Councilmen Donovan Richards (D-Arverne), Daniel Dromm (D-Jackson Heights) and Paul Vallone (D-Bayside). Miller said greater enforcement was needed, recalling trucks usually based in Elmont, L.I., that parked on the Queens side of the border. They were taking advantage of the lax enforcement, Miller said.
Posted by Queens Crapper at 5:48 AM

The city needs to generate more revenue so that our Comrade, the Mayor, can continue playing his "free" legal staff.

So, does the councilman turn off his heat or air conditioning when he retires for the evening, after a hard days work?

I imagine NO, and I also imagine he has never seen a hard days work...

Why not go all out, NO COMMERCIAL PARKING PERIOD, except to unload and the driver MUST stay with the truck during that unloading period.

Why this was not a law to begin with is the usual NYC bullshit mind blogging crap.

I can only imagine what paid legal staff would cost.

Yeah Yeah Yeah another do nothing "Councilman" dreaming up laws so he can tell his constituency he's fighting hard for them. It's an unenforceable law and even IF how often will you see a ticket on a truck for overstaying their time limit. NYPD will beg off enforcement saying they don't have the time to keep track (Who Does?) Traffic division will say they don't have the time or the "Training" Just like they did with the 53' Trailer laws.

What a bunch of clowns the city council is. THey're replacing Ringling Bros.

To second Anonymous: The Ringling Brothers circus folk always made everyone smile. These unfunny clowns in the vastly overpaid city council (and brazenly paid by ALL pay bumps that THEY themselves approve——not We, the People for whom they purportedly work), only end up dehumanizing their ever languishing constituents, with a vengeful impunity that is unprecedented, to date.

Not only do they repeatedly fail to earn their taxpayer-funded paychecks, but they DEVALUE all honesty itself——to pathologically traitorous and tyrannical effect! (Now, these empowered idiots of epic fail are so exalted, that they openly practice their corruption, graft and greed——and, the public be damned——again and STILL!)

To second Anonymous: The Ringling Brothers always made their audience laugh, so unlike the unfunny, vastly overpaid clowns of the city council (whose self-appointed pay bumps were made possible compliments of We, the People's hard earned, taxpayer-funded dollars that continue to reinforce all taxation without representation).

These empowered idiots have never worked for a living (much less word hard!), as they continue to openly and brazenly betray all pretense of public trust, ethics, integrity, accountability and transparency with a vengeful impunity that is unprecedented, to date!

SAME CIRCUS, DIFFERENT CLOWNS (and, too often it's the SAME CLOWNS until they reach the end of their politically worthless terms of epic, humanitarian fail)!

These drivers are struggling to get by, so the sleep in their truck.

As stated in story:
"Miller said the vehicles are often idling overnight, running their engines for air conditioning in the summer or heat in the winter."

I am just providing some info on the life of an over the road truck driver...

They can sleep in their fucking trucks, but not on the streets, find a damn rest stop. You answer is total bullshit. So they need to sleep, but they don't need to break the law by parking their damn trucks on residential streets, plain and simple. You don't need to provide me fucking info on a road truck driver, had two cousins who were that. So spare me.

I love how people try to justify something illegal.

Every weekend i used to pay a visit this web
site, as i want enjoyment, since this this website conations genuinely
good funny stuff too.