How brainwashed is the Queens press? 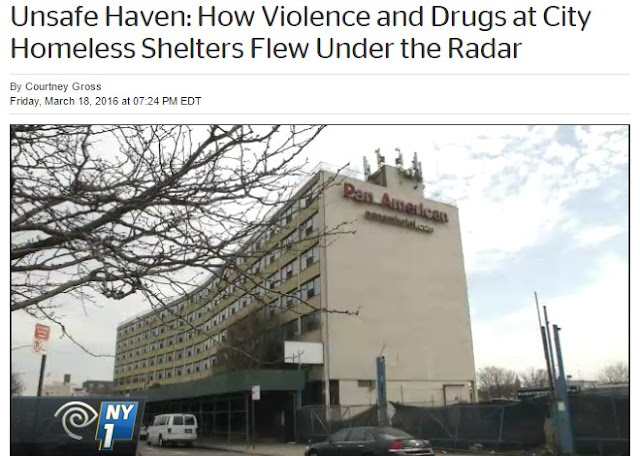 So remember a couple of years ago when reporters announced with glee that crime decreased after the Pan Am opened, relying on bogus stats from the NYPD and the DHS to make it look like there was hysteria over nothing?

Then came the problems that couldn't be hidden. One by one the reports piled up.

DHS' response? That a racial incident was perpetrated against an unnamed Pan Am shelter kid by unnamed assailants of a local school. No arrests were ever made, and the NYPD and DOE were never notified of the incident, yet it was reported as fact, because local journalists don't think DHS has a reason to lie.

Now the shit is really hitting the fan, as real journalists, like citywide reporters Courtney Gross of NY1 (5-part series) and Greg Smith of the Daily News (5-part series), absolutely rip the de Blasio administration apart over their mishandling of shelter problem.

When a community reports major problems with a shelter, maybe it's best that the local reporters take them seriously.

Please do your jobs and stop being shills for the mayor.
Posted by Queens Crapper at 12:56 AM

Their "jobs" ARE to be SHILLS FOR THE MAYOR.

Now cops will be assigned to babysit at homeless shelters after they fill in for absent school crossing guards. That leaves the rest of us with virtually no police protection. It's gonna be very interesting........

And La Council Speaker Socialista is throwing out 1 million low level crime cases. But we have money to give free feminine hygiene products to all who "can't afford " them because they just bought an expensive cell phone, jewelry, and a tattoo .

What Queens papers do you think cover the boro properly? Any?

Absolutely NONE. Besides not digging deeper into issues that have been going on for a long time, they do not always publish the correct information. They never corner elected officials on issues and demand an appropriate answer and they rarely call them on their bullshit.

Most of the media and certainly all of the Queens press just use 'Newspeak'.

Have you heard about the second amendment?
oh yea, our politicians tell us guns are bad and not needed because we have the best police department that's underpaid & understaffed

click here if you want to protect your family and yourself

Let's stop reading the "rags". They will lose their advertisers. Maybe then they will change their focus.

Integrity! There is little to none.

Any time there is a controversy, the politician breezily wades in with quote after quote after quote all unchallenged while everyone else is cowering in a corner afraid to be told they "look crazy" just because they wanted to speak their mind and inject a bit of reality.

What is Queens Press?

The leftist, socialist, communist prostitution advertising papers?
The ones that you wouldn't even use to wrap fish in?

The problem arise when you concentrate hundred (or even a dozen) dysfunctional people/families in one place - bad-asses try to out-do each other; the despairing act out their despair. Everyone gets treated like a bad kindergarten student: if they deserve it, it's a useless joke; if they don't, it's an insult. DeBlas needs to address homelessness as more than a check-box on his to-do list.

Domestic violence and child abandonment, etc...can we move on from the narrative that people like this are just "down on their luck" and admit that many of them have no place as part of civilized society???

The weaklies aren't really all the same. Crapicle doesn't seem to believe DHS. I remember these headlines, so the articles were easy to find.

Editorials from Summer 2015? Go back to 2014 when the Pan Am just opened ans see what you find. I seem to remember a bunch of Queens reporters being obsessed with 2 people holding signs about hobos and conveniently forgetting the racist chants by residents of the shelter. Also the Daily News with their breathless reporting of the DHS commissioner whisking children away to the movies so they could avoid mean protesters.

The press has been bias since day one, as Crapper said, especially when it comes to the PanAm Hotel in Elmhurst. They forget that Elmhurst is made up of minorities and that ALL of the minorities were at the protest rallies, not just the Chinese. Yes, 1 or 2 people held up signs calling the homeless residents hobo's. So what? The residents shouted at the protesters to bring them some chicken wings. That's not racist? And some people shouted "Get a job". What's wrong with that? If they had jobs they wouldn't be living at the PanAm. In addition to the press, our own police captain doesn't report all the crime that occurs here. Sad state of affairs.

Go back to 2014, crapper, and you'll find straight reporting of the dhs lies and the rallies and all the rest. The weeklies are not all the same, as the poster said.

Yeah, the precinct commander said crime in the area had gone down. That's not supposed to be reported?

It should be questioned in light of the fact that many people showed up at civic meetings complaining about the crimes that were happening which were conveniently left out of the reports. How did Courtney Gross and Greg Smith dig up the stats on the Pan Am but the local papers failed to?