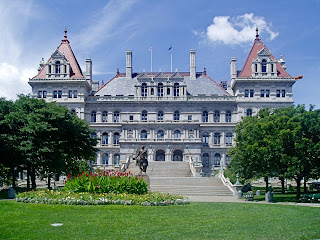 State Assembly Democrats have introduced legislation that would increase public disclosure requirements for groups that lobby in New York.

The bill, according to officials, would also specifically exempt from the definition of lobbying any communications with news outlets, including editorial boards.

In a controversial order that has sparked lawsuits from several public relations firms, the state ethics commission recently enacted a requirement that would require communication consultants who speak with editorial boards about issues before the state to register as lobbyists.

Currently, groups, including noncharitable, nonprofit organizations, that spend more than $50,000, at least 3% of which is devoted to lobbying in New York, are required to disclose the identities of donors who gave them more than $5,000.

Under the Assembly Democrats’ bill, which is sponsored by Assemblyman Matthew Titone (D-Staten Island), the amounts would be significantly lowered.

The bill, officials said, would require organizations registered to lobby in New York and that spend more than $5,000 to disclose the names of all donors who gave them more than $1,000. They would also have to disclose the exact amount donated and how the funding was used.

Under federal law, donations to nonprofits cannot be tax deductible if the money is used for lobbying, Assembly officials said. The bill would make it easier to figure that out.

The Democrat-controlled state Assembly is looking to crack down on a major source of outside cash for lawmakers — referral fees.

A plan released by the Assembly on Friday would require legislators employed as private lawyers to disclose the legal work they did.
Posted by Queens Crapper at 7:37 AM

More useless paper filing that no one will read or understand.

The politicians can say that they did something, even though it will be meaningless...

Hah! An ethics bill for Albany? We must all be going mad!
The upstate crooks, far from the watchful eyes of downstate, will find a way to end run around the rules.
Albany has been a hideout for shady pols since the Civil War days.

Do the new ethics reform bills include the impeachment of Cuomo??

If the headlines said republican this article would be screaming
CORRUPTION at the capital,we have fallen so far as a nation

Mario's son can fuck with this like when he put the kibosh on Moreland, which did enough work to investigate and indict Shel and Skel. And when the panel, appointed by the state of Andrew, starts to see some illicit shit on the governor, he will find a way to kibosh this too, if Schneiderman lets him have his way. Consequently, they will have enough on DeBlasio's CFONY cabal to bust them and take the heat of Andy again.

Andy is quite the cunning cad.

Alas, Andrew Cuomo has turned New York State into a cesspool that is overflowing with corruption, greed, graft, cronyism, nepotism, cover-ups, kickbacks and payoffs that not only completely betrays all pretense of public trust and integrity---but, he and his Albany pals and henchmen now DEVALUE all honesty itself---to pathologically, treasonous, traitorous and ruinous effect!

It's also the reason why New York is now an entirely ravaged and tonsured state, that has completely reverted back to the lawlessness of the 1970s, when crime, vigilantism, societal decay and full blown anarchy prevailed, and it was just as unstoppable then as it is right now---only WORSE!

Meanwhile, the vile, vapid and vacuous politicians continue to be vastly overpaid (to look the other way), at the expense, demise and completely gone morale of our once great city and state that are fast on their way to surpass a totally collapsed city like Detroit---and, gone with it our freedoms, rights, liberty and democracy itself---and, the public be damned!

More paper...more codified bull shit that won't be enforced. Wallpaper and window dressing.
When is Cuomo going to be indicted?

Any "ethics reform" coming out of the Legislature is immediately suspect. It is written by those it is supposed to supervise. Sort of like letting pre-K children write the rules of classroom behavior.