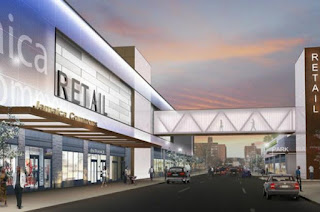 The deal to bring the first major department store to downtown Jamaica in more than three decades, announced nearly three years ago with great fanfare, has recently been terminated, officials said.

In May 2013, reps for the Greater Jamaica Development Corporation and the Blumenfeld Development Group said that they had signed an agreement to convert two parking lots on 168th Street, near 90th Avenue, into a massive 160,000-square-foot retail store and a 550-space parking garage.

In Nov. 2014, officials from Blumenfeld said that they were looking for a possible "anchor store," and were talking to several retailers, including Costco, Burlington Coat Factory, Target and BJ’s Wholesale.
Posted by Queens Crapper at 7:33 AM

The area is a high poverty and high crime zone. Prospective retailers will understandably take this into consideration.

The GJDC is doing such a bang up job, isn't it?

Can you say Amazon.com???

Tough case, Jamaica. Has been for 40 years, but better than it was. No simple fix. Likely remain as is for more decades.

Sorry, but no one is going to Jamaica to shop.

Other than the DMV and the courthouse, there's no reason to risk your life to go there.

It will take a lot of back-tracking to try and reverse the evil that has stigmatized Jamaica for decades.

You can't make a profit in a store that requires one security guard per shopper.

Retail can make a difference in an area. When I started working near Rego Park (around the corner from Lefrak Housing) in '08, we were told to bring our lunch and not stay late at work because of the crime in the area. By the time I left in '14, there was a Costco, Aldi, Staples, Century 21, etc in the Rego Park shopping mall, and pricey residential housing was being built. The same could happen in Jamaica. They'd probably have to put more government offices there to start the call rolling. Retail would open up to serve the workers, and big box stores would follow.

The owners probably decided it would make financial sense to sell the whole property to the di Blasio administration for the affordable housing initiative and move on to a site where use would not be dictated by the boy mayor.

the express DMV's in manhattan are a lot better and faster

They backed out because they're building homeless - ah - hotels in the area.

Back in the 50's and even into the early 60's, Jamaica was one of my mom's shopping destinations, the other being Flushing (the Main Street & Roosevelt Ave corridor).

Stores were well stocked, people were nice, streets were clean, transportation was abundant and safe. Those of a certain age will remember all this!

Mom and I would spend hours walking from the big department stores to the little mom & pops that lined not only the main thoroughfares but also the numerous side streets that emanated off Jamaica Avenue.

Nice memories, but unfortunately no longer a reality....

Bad career move Hope Knight heading the Greater Jamaica Development Corporation. Carlisle Towery’s shoes are just too big to fill. Maybe one more year at its helm and then either the Board kicks her out or she leaves of her own volition.

Greater Jamaica Development Corporation is one of the nation’s first community development corporations. Under the stewardship of Carlisle Towery for more than 40 years, GJDC has been in the forefront of encouraging private and public investment in a way which enhances the quality of life for the people who live and work in Jamaica, Queens. For many years, that struggle focused on encouraging private businesses to remain and revitalize what had once been a flourishing commercial hub.

As a result of the vision, advocacy of GJDC and infusion of significant capital, Jamaica has turned a corner. With several large scale development projects in various stages of commencement and solidly entrenched community anchors such as York College, AirTrain and Jamaica Performing Arts Centers (all of which resulted partly or fully from our advocacy), our task is now managing this revitalization and making sure that the community continues to attract responsible development. With new President and CEO Hope Knight, we are certain that our community-building mission will continue to thrive.

GJDC is supported through corporate and foundation grants, government contracts and income earned from its project operations. It has an overall annual operating budget over TEN million dollars and a staff of 70.

Jamaica was once a hub for government agencies but that all changed in the 70's when the area went to pot and they left along with the department stores.

I had predicted that this $50 million dollar retail space in downtown Jamaica, which was announced in 2013, was not going to happen and guess what, IT IS NOT.

In the article “There were a number of milestones that had to be met and for various reasons were not able to happen,” Hope Knight said.

None of this is attractive to developers who want to spend big money. WHAT DON’T YOU GET.

Will the same happen to the big development, The Crossing at Sutphin, which has been constantly delayed.

Jamaica: From HOT to NOT!!

Nobody wants to go and shop where you might get killed. sorry.

You can't blame the GJDC when all the natives are are scaring away the money.

Well when you are business as long as GJDC, yes, they are partially to blame. What exactly have they done for decades, at least 4 decades.

Jamaica Av is one long trashy looking flea market during the summer. It's disgusting and scary!

Regarding this BS boilerplate, which was likely cut and pasted from the GJDC website:
"As a result of the vision, advocacy of GJDC and infusion of significant capital, Jamaica has turned a corner. With several large scale development projects in various stages of commencement and solidly entrenched community anchors...
our task is now managing this revitalization and making sure that the community continues to attract responsible development."
Take a walk down Hillside and Jamaica Ave's, and see how 'Jamaica has turned a corner'.
What 'revitalization' has the GJDC managaed? Projects that were to have broken ground years ago have gone nowhere, or are dead, as this latest news reflects.
They are making sure that the 'community continues to attract responsible development'?
Jamaica Ave looks like hell, with idiotic repetition of the same types of low-end retail, and many more 'for rent' signs appearing within the last year.
Simple acts, such as banning the huckstering 'everything on sale NOW!' loops that
blast out of some of these places on Jamaica Ave and 165th St, would go a long way
toward improving the business image of downtown Jamaica.
How many more millions in 'corporate and foundation grants, government contracts' are going to be funneled into this organization before any real improvement can be seen?
There are 'Clean Streets' funded, uniformed sanitation teams all over the city.
Why not in Jamaica, which has an obvious garbage and litter problem?

Would the Gertz family sell its (brand) name? Wouldn't it also be so cool
if Walgreen bought the Woolworth name and brought it back? DO we have to wait
for some Chinese company to buy up the old names?

But EVERYONE WANTS TO COME TO QUEENS, as the borough president keeps stating.

No matter what anyone proposes to uplift Jamaica, it will remain a ghetto location.
More money down the toilet to be flushed. Bawoooosh!

Who'd want to build a department store in Jamaica if it was not catering to ghetto shoppers' tastes?
FYI:
Back in the day Jamaica had Macy's with roof parking and all. It was a model modern department store.
The problem with Jamaica, aside from Jamaica Estates, is its population.
Slobs generating garbage and crime.
It will be a long haul until the area is civilized once again.