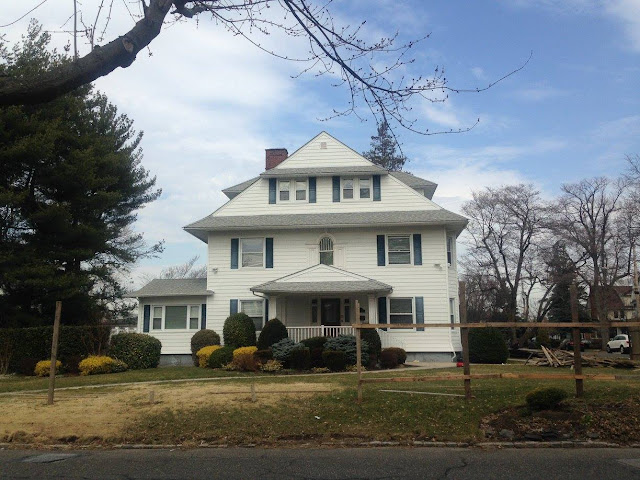 "This house, along with all of the houses on 40th Avenue from All Saints Church to 223rd Street, were included in a proposed historic district. It was ignored by then-Councilmember now-convicted felon doing jail time Dan Halloran. The current Councilmember, Paul Vallone, is also generally opposed to protecting our neighborhoods from destruction, as can be seen from his support to not allow the Douglaston Historic District Extension (along Douglaston Parkway north of the LIRR) to go forward. His press release stated that "landmark status imposes undue restrictions on the rights of homeowners to renovate, modify, or even sell their properties as they wish." This is total NONSENSE and typical of an elected official who got most of his campaign contributions from the real estate industry.

As for the specifics of this property: I just looked up what the plans are for "renovating" it. The house will be utterly destroyed. It will look like a brick box from the outside with an addition to the rear. Also, the property will be subdivided to include another detached brick box immediately next to it.

When Tony Avella, myself and the community worked to rezone Bayside a decade ago, it was only part of the story: if you don't landmark buildings or create historic districts along with it, zoning only has limited power to regulate what happens in your neighborhood. Yes, we stopped some of the worst abuses from occurring by changing the zoning in many areas from R3-2 and R4 (multi-family attached buildings) to R2A and R1-2 (detached one-family houses only). But, as can be seen, any property larger than the minimum like this beautiful house can immediately be subdivided and utterly destroyed." - Paul Graziano 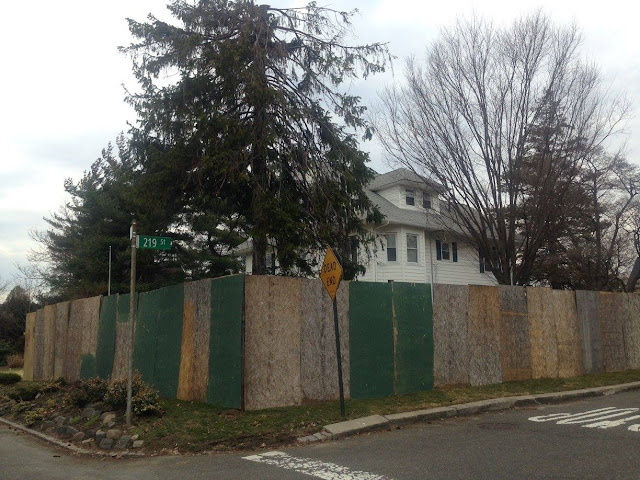 And here's another example of the destruction of Bayside: 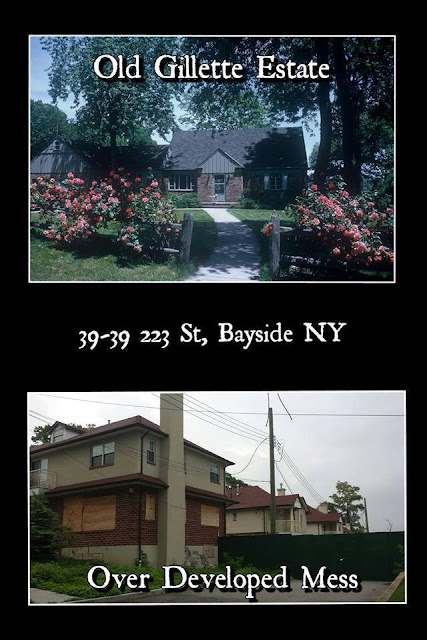 This is why something asinine like a "landmark compromise" as suggested by the Queens Chronicle won't work to preserve architecture that has historical and aesthetic value. The law needs to be have teeth to be effective.
Posted by Queens Crapper at 6:28 AM

Hey Paul - We appreciate all your efforts - what a depressing situation!

Go over to the Steinway Mansion or Old Astoria to see the magic that the Vallones are capable of. By all means take pictures and have the local civic spread them around Paul's district.

Take some pictures of the buildings their friends like the Pistillis build or Caliendo's mad-cap taste.

Do it every few months. Even better, bring a few blowups of them along with you when he is making a public speech somewhere and ask all those present if that is what they want for their district.

Let the Vallone's record speak for themselves and their values.

Blame this on the boro historian, and that 'preservation' group that meets over at boro hall and does squat. Blame this on QHS and their loopy bs 'Queensmarks.'

Blame this on the Queens media that covers every preservation event by mentioning the local councilman repeatedly trying to give a lame impression that they give 2 sh*ts about community preservation.

Queens deserves better. Reach out to groups in Manhattan and Brooklyn to get a dose of reality.

It's such a horrible site! Why can't we just deport more people in this city instead of knocking down beautiful houses to house all of them?

I was at a community board hearing in Manhattan and a private homeowner wanted to renovate their house and the architect showed up with a scale model of the entire block, it took 2 guys to carry in the model, they also brought 25 display boards depicting the renovation. The community board only approved half of the renovation. It was so obvious they knew their shit and no one was going to mess with this community board.

We need stronger elected officials who aren't afraid of developers and will stand up to them to protect our community.

Our own Paul Vallone wrote a letter of recommendation for the KAAQ when they tried to close the street in front of McGoldrick Library and set up a plaza. With that kind of representation we are in deep doo doo.

Nick (judge) Garaufus was the shady council for crooked Claire Shulman who was Manes ass licker.
It is only fitting.

Is really criminal when precious pieces of history are systematically destroyed by greed and corruption.

It's such a horrible site! Why can't we just deport more people in this city instead of knocking down beautiful houses to house all of them?


notice when you knock a pol you get garbage like this posted by one of their hacks to discredit this blog.

We need stronger elected officials who aren't afraid of developers and will stand up to them to protect our community.

You have it the nail on the head, but not how you think about it. Your problem is not depeding on stronger elected officials. They will stand up for their career and anyone that gives them money, rather than grief to advance it.

You need a stronger civic culture and community members with a backbone.

Here's a better question: Why did he move away in the first place? I formerly thriving, affluent and safe neighborhood is now covered in"for sale" signs. People don't normally leave areas like this in droves. But it's happening here...

The two issues that are killing our area are still utterly ignored by our hero officials. Those issues are

That's right. Plane noise. I'd feel bad for the guy, except for the fact that he is an FAA apologist and supported the TNNIS route because he's a Tennis fan. Poor fella.

Judge Garaufis is the poster child for NY Corruption from the bench
Garaufis loves cop killers,yesterday's ny post,
Garaufis gave 100 million dollars to 300 Idiots who failed an fdny test written that you couldn't fail But they did,Amazing
Garafuis believes in white privilege and that it should be a Felony
Not a nice guy.

"no one was going to mess with this community board"

I'm responding anonymously here, but I ripped CB7 a new one two of their recent meetings. Once you sign in as a speaker they must give you 3 minutes of speaking time as part of the open meetings law.

They do what they want to do, no matter what you say. But staring in their faces and saying that "community boards are ruining there own neighborhoods and are in desperate need of reform" felt great.

>I was at a community board hearing in Manhattan and a private homeowner wanted to renovate their house and the architect showed up with a scale model of the entire block, it took 2 guys to carry in the model,

Can you imagine how much that cost? Do you really want to pay for that when you're on a budget and need to fix up your place?

will garaufis be in the house ,when it is demolished or remodeled ?A FDNY employee told me that he will get $20,000 more from his pension,because of judge garaufis' affirmative action ruling ,recently.Dems always screw the middle class taxpaying citizens ,except in this ruling.

Sorry but the right to landmark was decided by the Supreme Court in 1965.

Didn't Judge Garaufis know he was selling to a developer that would be doing this?

Can you imagine... I'm not saying people should have a model made of their block I'm saying they really went out of their way to prove to the community board that their construction project will comply with the rules and character. They don't just show up with some papers and expect a rubber stamp.

>I was at a community board hearing in Manhattan and a private homeowner wanted to renovate their house and the architect showed up with a scale model of the entire block, it took 2 guys to carry in the model,


THE SECRET TO SUCCESS IS TO BREAK DOWN THE BARRIER OF INFORMATION THAT THE MACHINE HAS IN THE LOCAL MEDIA . WITH THE INTERNET IT IS NOW EASY. LOOK AT QUEENS CRAP.

APPLY YOURSELVES INSTEAD OF JUST WHINING.

Did not Cecilia Chang (ST>JOHNS ) hang herself after a fed court judge locked her up at her trial ? It was reported that she lived on the same block as Manus,then BP Queens.

Those Vallones and the bullshit fed to the Steinway community back in 76 all but killed that law for Queens.