An update from Forest Hills 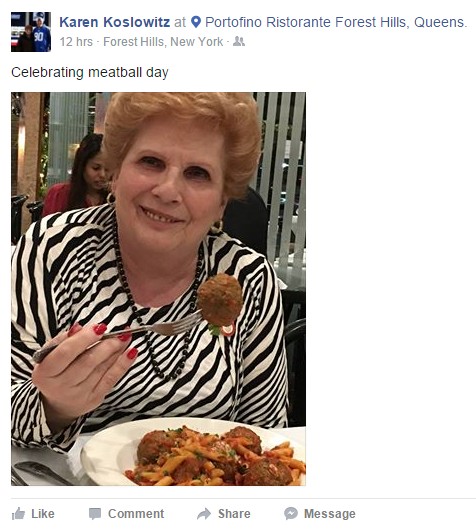 Posted by Queens Crapper at 7:42 AM

You are looking at exactly what's wrong with the Queens County political system.

When we say meatball are we talking about the food or the politicians?

Was the meatball kosher?

Karen, luv ya! You're our meatball hero. Tomorrow we post the meatball turd existing your fat ass.

Wonder how she's gonna handle a meatball that size

Thanks crapper - just lost my appetite!

How old is she? Glad it was meatball day not steak day. Her dentures couldn't handle it. This hack has been in politics forever. That's exactly what's wrong with Queens. She needs to start looking for a nursing home.

Lovely, everyone above is anonymous.

So she posted a photo of her dinner meal, how did that become the subject of so many negative comments? If you wish to see photos of The Koz signing legislation, chairing a committee meeting, attending rallies, unveiling street signs, or meeting constituents, you can request them by calling her district office. You may also friend her on Facebook, or follow her on Twitter.

With Passover coming soon, you may also contact her office for recipes.

You can call me names if you wish, but I challenge you to do so under your given names.

Why is a council member posting photos of her stuffing her face?

You mean where she questions testifiers by reading from her written notes prepared by whoknowswhom? Sergey, don't make us laugh.

That's great, now get the roads paved in your district.

Seriously who in their right mind votes for this lady?

And, now you have ruined the meatball experience (and image) forevermore---as my eyes can not 'un-see'one of the greatest 'Sight Pollution' debacles of them all!

See why 'Triumph Of Civic Virtue' is so desperately needed now (and, more than ever before!), fellow Queens Crappers??? Or, would you rather focus your gaze on THIS disturbing image of arrogant, political worthlessness that betrays all pretense of honest, ethical leadership (that leads by example)?

Because, beauty and purpose in public art has never been more correctly argued for (regarding our beloved, Kew Gardens Plaza statue's rightful and speedy return), when the blighted alternative is an integral part of why all politically failed systems, like the present scourge that occupies Borough Hall, is the living example of why Civic Virtue was created in the first place (as an allegorical work, and powerful meditation on symbolic art that is universal in its message)!

Alas, "Those who can make you believe in absurdities, can also make you commit atrocities." ---Voltaire

Sergey we are not in the old country.

Anon
Posting an Instagram picture eating meatballs is juvenile.
Even more juvenile that you post under anonymous also while complaining about others.

Are u guys working on some sort of secret list?

Can't wait to see the pic from Sausage Appreciation Day

Koslowitz probably thought it was cute to have her minions, the citizens, watch her shovel food into her $148,500/per annum mouth.

Civic Virtue should be erected right on that expansive plaza before the Borough Hall entrance. Smack dab in the middle and you have to walk around it to get into the building. Forget the old base's tree-covered location. That's why it got dilapidated over the decades because "out of sight, out of mind." And they hauled it off to a cemetery, way in the back, high on a hill where it practicall doesn't exist,

And they ask why Trump has appeal? The Ancien Regime is tottering.

I cannot eat after looking at this hag eating meatballs.
Thanks Crappy! :)

"Vat...no matza balls"?
She looks like she's ready for the grave.
An even more grave situation are the voters who elect turds like these.
No wonder Queens is a laughing stock portrayed as such in many TV sit coms.

Hope her ass burns from those spicy meatballs, when she hits the John.

Slurp! Burp!
What a mug on that meatball.
It would stop a clock.
Then again, I've seen better faces on clocks.

"Balls, said the queen. If I had a pair I'd be king".
An old ditty from the past. The rest is far too crude to repeat.

Alas, Sergey Kadinsky, the vulgarity that Koslowitz (and the entire City Council) is at the other end of such a justified attack is because they themselves INVITE all hostility and contempt, as they so completely betray all pretense of public trust and integrity, that they now DEVALUE all honesty itself---to pathologically treasonous, traitorous and ruinous effect (for everyone else)!

Then, the intense incompetence, and 'selective' and 'occasional' representation continues to manifest itself as 'business as usual' (without oversight and social contract), as taxation without representation and a dereliction of public duty are likewise flagrantly abused by levels of power, privilege, private splendor and unjust enrichment that were never in their purview to exploit in the first place (as they continue to maintain an arrogance, entitlement and contempt for their constituents [whom they have never served], that is unprecedented, which, in turn, breeds even deeper contempt from a stymied public of deeper levels of beggary, obscurity and angry, quiet desperation---as evidenced here.

Case in point: We have a psychotic mayor (who should have already been impeached two years ago!), who ignores public referendum, and allows a special commission to make recommendations for a city council pay bump that the mayor himself rejects, by cowardly signing a raise percentage that is actually HIGHER than the faux commission's recommendation!

Worse, these empowered idiots and developer sycophants are already, vastly overpaid at their former pay grade of $112,000 a year (for a part-time job, no less, that makes 'lunch-and-a-manicure' look painfully stressful by comparison)! Then, we have the Daily News calling for the mayor to veto the pay raises, on Saturday, February 6, 2016, and what do We The People get? Silence, arrogance and complicity---the prelude to all citizen revolt, lawlessness, vigilantism, societal collapse and finally, full blown anarchy itself (currently in mid-level progress)!

Because, when there is corruption at all top levels of a government hierarchy of epic, humanitarian fail, then everything (and everyone) below the carnage falls prey to the very same corruption, graft and greed that have already decayed the remnants of our ravaged and tonsured society---only the corruption that infects our rank and file is entrenched throughout a much larger scale and volume---and, the public be eternally duped, bilked, scammed and damned!

But, in the end, THEY don't ever pay the price for all greed, graft and lawlessness that THEY THEMSELVES created and foisted upon everyone else!

Is that really a meatball? My Italian-American mom would have flushed one like this.
It looks as heavy as a cannon ball or something Ms. K. just extracted from her rectum.
Good Lord! And you want to know why Queens always gets the shitty end of the stick?
This is the crap you elected to represent you!
Anyway, what would a Forest Hills Jewess know about meatballs? Chef Boyaerdee. Open a can. Warm it up. Voilla!
LOL!

they gotta get out.

Hmmm...red finger nails and a Zebra striped outfit.
Would you say out of date and out of touch?
Dementia never stopped any crafty politiciansfrom keeping their jobs