What closing Rikers is really about 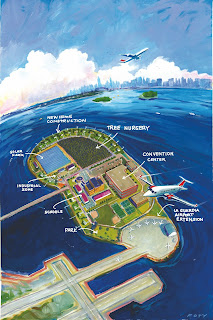 "I'd like to see a community built that would address the city's needs for affordable and supportive housing—including people with [criminal] records," said JoAnne Page, chief executive of the Fortune Society, a nonprofit dedicated to reforming the criminal justice system.

That community could be as large as 65,000 people, or roughly on par with the West Village, according to Ginsberg Architects, which drew up a plan for a residential Rikers island at the behest of Crain's. The plan sticks to the city's grid system, with 80 blocks of homes and businesses, several schools and 80 acres of park space. Lying in the flight path of LaGuardia limits heights on the island, so the architects envision buildings no taller than 100 feet, and a total construction cost of about $7 billion for the apartments, before any infrastructure improvements the island would need.

A large park could act as a buffer between the housing and the runways of LaGuardia Airport. A new vehicular bridge could connect the island to Astoria and carry an extension of Mayor Bill de Blasio's proposed Queens-Brooklyn streetcar. A ferry could run to Manhattan and to Hunts Point in the Bronx.

Jonathan Rose, head of affordable-housing builder Jonathan Rose Cos., said 40,000 people could live on Rikers if single-person units and supportive housing were prioritized. An alternative-sentencing facility on Rikers would be the best way to counteract the jail complex's brutal history, he added.
Posted by Queens Crapper at 5:40 AM

Thanks crappy for posting this sick story. It shows how this demented confederacy of douches have overwhelming influence on our duplicitous mayor and bleeding heart but empty soul city council.

And where are they going to put these shitbirds? And who are going to build these new prisons and where will they be located? I would also ask who will profit from all this innovation they like to call it, but we all know the answer.

These are the New Bad Days.

Jonathan Rose, head of affordable-housing builder Jonathan Rose Cos., said 40,000 people could live on Rikers if single-person units and supportive housing were prioritized

this is literally a plan to keep this 2 cities.

Or basically a economic leper colony for the working poor and the stagnant middle class.

"Affordable" housing. Right. There's no such thing in this city anymore, especially in an area that's so close and easily accessible to Manhattan.

My prediction is that they build "affordable" housing, but in the end it turns into an exclusive enclave of extremely overpriced housing for a few years. Then those nitwits will realized how much noise there is from LGA, so they spend a few years fighting to have air traffic re-routed. When that doesn't work as well as they wanted to, they move out in droves, filling the island with now cheap housing, a criminal element moves back in, and the haves look for a new place to move to with their whining.

Just think of how much money will be saved by not arresting anyone...

Who wants to live and have their children go to school next to a runway?

Solar farm? Tree Nursery? Give me a break.

Affordable housing? Not Union built! Even DuhBlasio has admitted that!

A great place to put the 'proles'.

Runways. It's about runways.

Is about money. More money for the fucking developers, sorry destroyers.
Follow the money people!

I can sympathize with all the moaning,groaning and bitching But what I can't get over is the Fact that your just to late to the party,
Will you ever open your eyes and admit YOU ARE OUTNUMBERED AT THE VOTING BOOTH,Whatever you have to say falls on deaf ears,you have no power to bring any change,while you slept in your bedroom community politician's were sucking up to the New Majority, the Dependent Class,the Angry little people living off your taxs with section 8,food stamps and free Healthcare and education,why would a politician need Union Support anymore,union support cost money and requires a Big Payback,the Dependent Class only require 5 DOLLAR INCREASE IN FOOD STAMPS TO SELL OUT YOUR LAZY ASS,YOU have only yourself to blame,you elected the people who did this to you so Tuff Shit,go back to sleep now and dream of the good old days of the RKO and Adventures inn,Whitestone pool,,It's over,you lost and you deserve it.

Did Rikers Island get any flooding/damage from Superstorm Sandy? Isn't it tempting fate nowadays to build and live so close to the water?

A discussion like this (and some math) was accurately discussed here a wile back !! It was about the mental mayors dream of needing or acquire real estate acreage the size of Maspeth or stacking Roosevelt Island 7 high.

Do you not realize, this is how they shut the Fiorello Henry La Guardia Airport down?

It is all part of the master plan...

And where are they going to put these shitbirds ?

LOL, the mayor will be bringing these "young urban trouble youth" to your doorstep with some social worker in exchange for a tax break or whatever stupid shit they will come up with.
Whatever you do do not let the city know you have an unused basement or "spare room". Anything is possible with these assholes running the show including actually bringing criminals to your building at gunpoint. And if you dont reside in the building you own you cant say shit about it without a lawsuit due to the discrimination laws.
Again anything is currently possible with the current president and sanctuary city mayors making all sorts of secret deals to create chaos (suspend the Constitution and elections during an emergency as patriot act allows) to stay in power.
No friggan joke dont say it cant happen !!

This bedroom community member did not vote for Big Slow or Fun Size or even Mario's Son. Nor did I vote for any of the cheap gold digging whores who ratified themselves raises in City Council.

Heh, appreciate the (sarc). I see that virtually all of the plans feature massive density without any infrastructure. How do they expect that many people to get onto or off the island while contending with traffic from LIC, Astoria, Flushing? Ferries, really? At least Welfare / Roosevelt Island has the F and tramway to supplement their one bridge. And I see a bigger airport features in many proposals too - as if there wasn't enough round the clock air traffic already!

Anybody follow "crap" blogs elsewhere in the state? I'd like to know where they're building private prisons to warehouse these inmates, if not NYC. I'm looking to retreat from here - is Putnam County far enough away from this madness?

My prediction is that they build "affordable" housing, but in the end it turns into an exclusive enclave of extremely overpriced housing for a few years. Then those nitwits will realized how much noise there is from LGA, so they spend a few years fighting to have air traffic re-routed. When that doesn't work as well as they wanted to, they move out in droves, filling the island with now cheap housing, a criminal element moves back in, and the haves look for a new place to move to with their whining.
---
The future of LIC, only take out any reference to 'airport' and put in 'brownfields' and 'flooding.'

and the day after the 65,000 people move there, they will start to complain about all the noise from the airport.

Jeez, all the progressive politicians are wringing their hands over climate change and the rising of the oceans. However they all seem to be cheering this abomination of a development.

Rising water, disappearing shorelines, subsidized homes for ex-cons, tax abatements for developers, buzzing jets from La Guardia and to top it off absolutely no public transportation to get onto or leave the island.
A model community for the slugs of society.

how much did Ginsberg Architects contribute to Comrade DiBlacksio's campaign?

Overpriced housing on Rikers?
Maybe for Chinese. They will live on shit as long as it has a golden title.
"Golden Mansion". "Golden Towers".

Why not just let the low income people rent out the cells that already exist, and live in them, like on The Walking Dead? The jailbirds can be spread out around the City in whoever's house has an extra room or basement to spare. That would be the liberal thing to do.

>Did Rikers Island get any flooding/damage from Superstorm Sandy? Isn't it tempting fate nowadays to build and live so close to the water?

It's sheltered from the ocean by 3 boroughs, so it's not as much of a worry there.

We all appreciate (sarc)!

"Buzzing jets from La Guardia"
We have the same shit in North Flushing, Whitestone and Bayside thanks to Next/gen.
Throw in some helicopters for good measure too !
All of Queens is going down hill and nothing will stop our quality of life from slipping further into the third world slum the politicians led us to !

Golden, Happy, Lucky, - pick a name :) for the new "development" affordable to the rich housing.

Nyc pols must be the only people still using LSD....