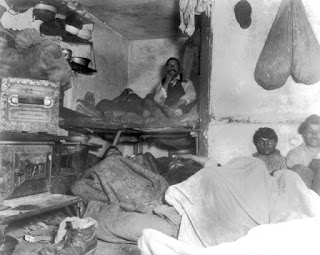 According to the latest Census Bureau data, about 9 percent of all households — or nearly 280,000 units — in New York City have more than one person per room, a common government measure of crowding. A decade ago, the rate was 8 percent. The change represents nearly a 13 percent increase. By comparison, the national crowding rate is 3.4 percent.

The crowding problem in New York worsens considerably in specific neighborhoods, particularly those with large working-class and immigrant populations where it is not unusual for two families to cram into apartments intended for one, and laborers to sleep two, three or more to a room.

While the Bronx and Brooklyn have the highest percentage of crowded units among the boroughs, according to Census Bureau data from 2014, the community district with the highest rate of crowding is in Queens and encompasses Elmhurst and southern Corona. There, a quarter of all residential units are considered crowded. A study published in February by StreetEasy.com found that five of the top 10 most crowded neighborhoods in the city were in central Queens.

The overcrowded dwelling typically finds its most severe expression in illegally converted basement and cellar apartments, most of them overcrowded and riddled with safety hazards such as shoddy construction, dangerous wiring and improper means of exit in the case of a fire.
Posted by Queens Crapper at 7:40 AM

Start deporting these illegals and stop giving out government handouts left and right. This will solve a lot of problems.

I grew up with my siblings in the same room. That is the way it was.

We all survived and thrived.

This is another case of government intrusion and intervention looking for problems where there is none.

Thereafter the intention is for government to try and fix the situation that is a non issue.

A new agency and bureaucracy with endless unintended consequences.

We are from the government, and we are here to help...

Queens, the family borough. All in one room.

Imagine what the real numbers must be, you know, the ones if the Census was actually truthfully answered.

"I grew up with my siblings in the same room. That is the way it was."

Growing up with siblings vs. grown men on mattresses sleeping in shifts in cellars are apples and oranges.

"I grew up with my siblings in the same room. That is the way it was."... This is about more than one person per room, not bedroom.

"This is another case of government intrusion and intervention looking for problems where there is none."
Exactly right. 30 years ago Queens was still a decent place to live.
The reason that Elmhurst and Corona are Hispanic ghettoes is because the government
decided to stop enforcing immigration law.
Except the situation is guaranteed to become worse, as it becomes widely known that
unless an illegal kills someone, NYC will not comply with any ICE requests that a felon be turned over for deportation proceedings.
In fact, with the universal NYC ID that DeBlasio rammed through, anyone can become a 'citizen'.
Next step: City Council will grant these people the 'right' to vote.

Time for the Feds to defund sanctuary cities.

I'm sure our Queens electards will get right on it.

Yes, but diversity is our strength!

Just think how the cities of Calcutta and Bombay have so much more VIBRANCY than New York City does!

Maybe our intellectual superiors - Hilary Clinton, Bill de Blasio, et. al., - can set the example for the rest of us and take in some VIBRANT boarders into their abodes!

How many adult children of legal

I wonder how many adult offspring of US citizens of the caucasian persuasion are living in basements/cellars? That's just illegal occupancy, not an issue of density, of course. BTW, Crappy, is that a Jacob Riis photo?

**City Council will grant these people the 'right' to vote**

The way tings are they need all the illegals to vote! For them.

**I grew up with my siblings in the same room. That is the way it was.**

Great comparison. So is all good to have 20-30 people living in a 1 family house then.

Make it 45 if 15 bedrooms can be rented out to 3 people each, sleeping in shifts.
Enforcing zoning laws is not an intrusion.
These laws serve a purpose including protecting the shift sleepers.

"China aims to lay off 5-6 million state workers over the next two to three years as part of efforts to curb industrial overcapacity and pollution, two reliable sources said."

Will all of them be coming to Flushing?

keep tearing down single family homes for 10-unit apartment buildings, it will only help!

hot racking is OK on a submarine, but not for an apartment in Corona. Get them out, and ship them home.

I have rarely seen citizens or legal immigrants in Queens these years.. Most of them are illegals, from Central America. Cleaned them up, problem solved.

But what about the strength of our "diversity"???

These Spanish-speaking illegals come here illiterate in both Spanish and English. Unbelievable resources are being spent on them in schools so they can learn English---which they are not interested in doing, so long as they can hang out among their fellow Spanish speaking illegals in Corona and other such neighborhoods, bringing them down to turd-world disease and gang infested ghettos (same with the low-rent Chinese illegals). The schools have to hire ESL teachers and paraprofessionals for these bargains--which is a total, absolute waste of money, as many of the illegal students have NO, absolutely NO interest in learning. They sneak out their phones, grab various parts of the nearest female student near them, lack any respect for their teachers, especially female teachers, sleep, arrive very late to class, do no work, etc. You would become nauseous to watch them in a classroom, with the distinct "ding" of a cash register playing in your head. In no way, shape or form are 90% going to be able to hold more than a menial job. Their sole use is to be faithful Dumbocrap voters for the pols who allow them to come here and suck up mucho dollars of taxpayer money in housing, education, medical care and other expensive resources.

"diversity" is a code word.

Anon
What are you implying when you say that "diversity" is a code word.

I imagine it means joy, love, peace, rainbows, all of us holding hands together as we sing Kumbaya, and enjoying a Coca-Cola with the cute happy polar bear wearing the beautiful red scarf.

Is that not our strength???

There is nothing different between that image and waht is going down today in neighborhoods across queens like Corona, Jackson Heights, Flushing. Times change but greed is always in fashion !!

Share some of the good stuff your are smoking.

>Yes, but diversity is our strength!
>Just think how the cities of Calcutta and Bombay have so much more VIBRANCY than New York City does!

But those cities aren't diverse at all.

sadly, the only "diversity" as well as "minority" are the legals...

INDIA is overcrowded by about 1 billion people. If we were to become as crowded as a nation, it would be the end.

LOL!
Vote for Trump.
Maybe he'll build a wall around densely overcrowded Flooshing.
It could feature some Great Wall of China design features.

"Bustling, vibrant, diverse".
"Queens...the world's borough".
What some spin doctor's nice way of repackaging an overcrowded ghetto,
into something more salable.
Do you ever hear anyone positioning Manhattan as "vibrant or diverse"?