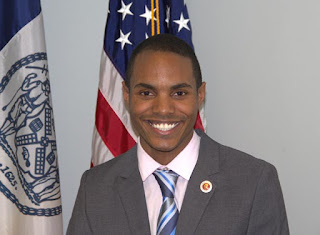 The Board of Elections would be required to send all eligible voters in the five boroughs a “voter history” card that will tell people how many elections they’ve missed in the past four years under a new bill being considered in the City Council.

Councilman Ritchie Torres, who proposed the legislation, said the tattle cards will encourage people to get off the couch and do their civic duty.

He said he felt compelled to introduce the bill, which has its first hearing in the Council on Monday, because of New York’s abysmal voter participation rate.

Nationally, New York State ranked 46th in the country in voter turnout, and only 25% of eligible city voters cast a ballot in city elections last year.

Maybe people just realize that whoever they vote for, they're probably getting screwed anyway.
Posted by Queens Crapper at 8:36 AM

Now ain’t that some shit. Shady, crooked, useless, do nothing NYC elected officials want to shame voters into voting for the same old shit.

New York State ranked 46th in the country in voter turnout, and only 25% of eligible city voters cast a ballot in city elections last year. “It’s an embarrassment,” said Torres.

NO Torres, what is an embarrassment is a fucked up city council with do nothing, crooked assholes along with all the other useless, corrupt asshole NY politicians who do shit. To make matters worse, we have so much voter suppression in the form of knocking off candidates from the ballot to narrow the field and keep incumbents in and the old gerrymandering districts to keep the same shit in office over and over again, the same asses they keep fucking things up. That is the FUCKING EMBARRASSMENT.

Good example, look at Southeast Queens, where the same names have been in office for decades, while the community is a complete fucking dump with mounds of problems.

People have no faith in this fucked up system, so they feel why bother and cannot you blame them. It is not like we get a nice segment of candidates to vote for on the ballot. Assembly Member Alicia Hyndman had NO competition in the primary from any other Democrat when she was elected to the Assembly. And this is not an aberration, there is a high percentage of this all over the city.

So, FUCK YOU TORRES.

this seems like an invasion of privacy and smacks a little of coercion, as it also seems to be compiling people's voting habits when they do bother to vote. It's like another case of the public shaming culture that's going around. Maybe richie here needs to work on his Trevor Noah impression than to weed out people discouraged with and by the government system.

Jesus, watch what happens if it's trump v clinton, bet that it will be the lowest turnout in history.

I imagine that there will be strong turnout this November 8th.

However, it may not turn out the way that the powers that be expect.

Will these "report cards" accidentally go only to participants of one particular party???

Well at least someone is thinking and trying.

Commie dictators used to this, then they claimed victory with almost 100% participation thus justifying their dictatorships.
What a degenerate to even propose something like this.
Some people are not interested in politics, diet or regular, and that's their choice.
How about a shame card for the politicians?
Better yet why don't they wear logos of their donors,lobbyists and businesses that are supporting them.
Like Nascar drivers do.
Now we are talking!

I'll bet it will be the largest turnout - ever!

Australia charges 200 bucks for Failing to Vote
Whats the point,corruption is rampant

If he wants better voter participation then he should encourage it by visiting all neighborhoods in his district and discussing the importance of voting. he should get credit for bringing light to this most nationalistic duty but needs to show more...

Joe Moretti you just hit the ball out of the ball park !

Great idea! This way the BOE can hire more hacks to do the mailing. But the easier solution is just let everyone vote! Regardless of age or citizenship.

The list of law suits against the government would be astonishing.

The democratic machine created the KKK,
Why do African Americans follow the whip and rope party
I don't understand,an entire race can't possibly be that ignorant

The larger number of people voting the easier to hide the illegals voting!

Right out of the Democrat playbook.

I think the idea of reminding voters that they don't vote is 100% legit.

When Bill DeBlassio is put in office "by a LANDSLIDE of epic proportions 73.15% to only 24%" and then we learn that only one out of four people even bothered to vote, we ought to conclude that voters must take a lot of blame for what's wrong.

This same lack of participation was seen in the primaries so it's not like it was because the Mayoral election was a forgone conclusion. In fact in the primary it was just one out of five eligible voters who cast ballots. That sucks!

The voters are both uninformed and lazy and to suggest that candidates visit every single home, because the voters won't spend an afternoon to go to a local debate is bullshit.

We get the government we deserve if you sit on your fat ass and then complain about the election results you're an asshole.

If you later "explain" that you don't vote because it's "all bullshit" then you're an asshole and an idiot.

In many local communities across the US the vast majority of voters mail in their ballots and the results aren't much better. Assholes can't find a mailbox?

Now in some parts of the country towns and villages are putting stamps on the mail-in ballots because 49 cents is too much to spend for some. OK fine, I doubt that will even raise voter participation.

Of course everyone should vote, but way more important everyone ought to have a clue. What we have today is 25% participation and I'd guess 60% of them vote just to get something for nothing , the other 40% have zero clue what the topics really are and just vote like a bunch of zombies.

"let everyone vote! Regardless of age or citizenship."... Are you out of your fuckin' mind. Let's tear down the borders and put up a sign that says Welcome to Disneyland.

Yet. That will come later. First the cigarettes, then soda, then salt.
Keeping a scorecard who voted (and how) is the beginning.
Not required, but shamed into voting. Soft control for now.

@If you later "explain" that you don't vote because it's "all bullshit" then you're an asshole and an idiot.

Maybe, but your lack of understanding of the current state of the whole process is weak.
Big money, interests select the candidates, present them to the public as legitimate choices. Your vote basically legitimizes their choices.
Is their money, your vote.
When a self financed candidate steps is panic ensues.
Both sides start with the attacks, relentless efforts to find something and destroy the outsider.
Exactly what we see playing out in front of our eyes right now with Trump.
Regardless whether you support him or not, the attacks are way out hand, Hitler, KKK and other finely tuned morsels are plastered all over the media.
Yet the same media is silent when it comes to their preferred candidates for similar or worst behavior.
They can do no wrong.
Now who owns big media?

In order for the process to be fair big money needs to be taken out from the elections.
Otherwise people will become more cynical and decide to exercise their freedom of choice when it comes to voting.
Locally the situation is much worse, more than sure you can find plenty of material on this site regarding local elections.

@Yet the same media is silent when it comes to their preferred candidates for similar or worst behavior.

I agree with much of your post, but I stand by my comments. People need to vote and all this bullcrap about WHY they don't vote isn't worth a pile or rat shit. Get involved AND then also vote.

As for the media, you are spot on, but what idiot is stupid enough to listen to "all the news we decided to print" anyway?

Are you suggesting that the morons actually vote based on the (pretend)press? You might be right. As I posted above 40% of the voters are just hopelessly clueless.

I hope and pray that the voters of NY realize that they elected a Marxist lunatic for Mayor and sober up before the next election.

I'd rather go to the track and take my chances betting on a good horse.
With several Queens pols indicted, going to, or getting out of jail....
give me some hope.
WTF is there to pick from?
Then you've got an army of political hacks to choose from that are left without prison records.
Am I supposed to go to the polling place smiling?
Only if I've had a toke of some good stuff first!

THIS DUDE WILL NEVER BE MAYOR OR SPEAKER !!