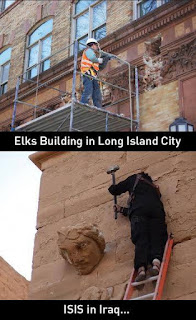 Some of the biggest names in the Long Island City arts community declared war on developers who illegally altered the decorative facade on the Elks Lodge building on 44th Drive Tuesday, one week after neighborhood residents renewed efforts to have the property landmarked.

Artists in LIC don't give a flying rat's ass about preservation, only ice cream money from Jimmy Van Bramer.

“Maybe this building is a line in the sand about how we go about further development here,” Mazda said. “We’ve had a relationship with other developers like Rockrose and TF Cornerstone, who go about things by the rules. Not these Johnny-come-latelies.”

City Councilman Jimmy Van Bramer (D-Sunnyside), who organized the rally of artists outside the Elks Lodge Wednesday afternoon, was furious. Last week he wrote to the Landmarks Preservation Commission, urging them to designate the building as a historical landmark.

Time and again, we have seen electeds pretend to care about saving something, only to later find out that they were in cahoots with the developer. But holding a rally means you can shrug your shoulders and say you tried when the building comes down.

The councilman said he would draft two pieces of legislation to discourage developers from illegally altering structures. The first piece would impose significant fines and penalties to any landowner that intentionally alters the facade or any part of a building that is in the process of being landmarked and the second piece would authorize the city to increase the fines if a developer does illegal construction without a permit.

Which will have absolutely no teeth, because sending a letter to LPC doesn't mean the building is "in the process of being landmarked".

How many preservation groups were invited to this rally?
Posted by Queens Crapper at 7:57 AM

The trust-bunnies from LIC have the time to turn out for this kind of thing...

Going by the quotes by those 2 in the ledger and their defense of rockrose, also phony arts groups, who just incriminated themselves on being complicit with the hyper-development and inflated value speculation in LIC. They are the developers useful idiots.

Ask Jimmy who was invited to the rally. It was his set up.

From what I overheard, Councilman Van Bramer did not invite the historical society.

A private meeting with the councilman? Developers play by the rules? Interesting.

Mr Mazda is more than welcome to his opinions.

He does not represent the community.

If so, you can say that for LIC and Queens for that matter.

You are right about Mazda and Bramer, but not about all the artists that were at the rally. I know some of them personally and they are good people from LIC and from other hoods in Queens. Some people have been asleep and are finally reaching the breaking point. At least that's the case for one artist in particular, who is dealing with both Mazda and Bramer. Big egos are a pain, but the point is to bring attention to this beautiful building and hope more communities become empowered.... or at least wake up.

Alas, the only preservation in Queens County is all systemic, cradle-to-grave, political corruption, graft and greed (of epic, humanitarian and ecological fail!), and, they can do it at will---to pathologically treasonous, traitorous and ruinous effect---and, the public be eternally duped, bilked, scammed and damned!

And you keep re-electing them...

When 5 Pointz, a prime Queens tourist attraction (possibly it's only really big one) approached Jimmy Van Bramer for support, they got the run around.
Then, with his signature impish reticent crooked smile, they finally got stabbed in the back by JVB!

Councilman "Jimmy" is one of the biggest phonies warming a bench in the city council chambers.
He took $10,500 in campaign contributions (chump change for a REBNY hustler) from the Wolkoff family who owned the 5 Pointz site.
Is it any wonder why he did not support one of the biggest New York arts attraction?

Jimmy boy pretends to care about the arts when what this sniveling SOB really cares about is becoming mayor someday.
To get enough money for his mayoral run, he will bend over for any developers' cash he can get.

The arts community in LIC is a little too late in protesting the destruction of LIC's architectural, historic and cultural sites.
Suffer the little children, now! The councilman IS NOT your friend.
He belongs to the NYC real estate industry that tucks him into their deep pockets like a micro Yorkshire terrier.
"Sit...jump...roll over. Good little doggie. Here's your reward".

Line in the sand?
LOL!
The only thing in the sand are the heads of Queens' voters.
Like Ostriches they go about their business, the dumbest clucks in NYC!

Uh, where is the Queens Hysterical Society?
Busy sucking up to politicians and borough hall for funding.
I ought to know.

Councilman JVB porked us again!
Once in awhile he gives up his role as a "bottom" for REBNY.
He holds a phony press conference.
Too little. Too late.

Face it...LIC is zoned for mega high rise development.
Anything that stands in the way of billionaire developers gets razed.
Glass walked glitz boxes are the new horizon.
Rest in pieces, Elks building.

Jimmy getting paid off by developers will never make the news.
The news is that voters better start looking up online...it is easy...where their candidates get their money from.
Jimmy's record can be checked at the Board of Elections site. Melinda Katz is one of the biggest REBNY sluts in the business.
I once printed out her developers campaign contribution list for her council runs and exhausted my black ink cartridge.
This is who runs Queens...not its voters residents or even its politicians..it is the real estate industry of NYC. In other words REBNY!
Get wise, you voters, and do it quickly!

Do you really think that developers buying politicians will ever make Vicki Schnepps wedding news Courier?
That is the lowest of all Quuens weekly rags. The remaining are not much better.

Looks like those guys that got an award for the Clock Tower and jumped ahead of Broadway Flushing, Richmond Hill, you name it, Hall and Crislip of +Parners, have decamped from LIC and seem to be in London.

Funny how they got attention.

I guess there is a difference between transferring air rights and actually helping a community .

So I guess the next step for the community is to ?

Jimmy will put his team together, get the press and move forward while everyone else is milling around.

Big deal!
They got a clock tower.
Meanwhile the rest of LIC gets fucked in return for a token landmark.
Big victory.

that clock tower was not for LIC it was for the developer next to the clock tower.

there is squat for LIC.

I do not think that ANY developer would care about the clock tower...next door or far away.
What have you been smoking?
Can I interest you in buying the Queensboro Bridge?
Sorry, the Brooklyn Bridge has already been sold too many times.