Katz and Ferreras freeze WPU out of important meeting 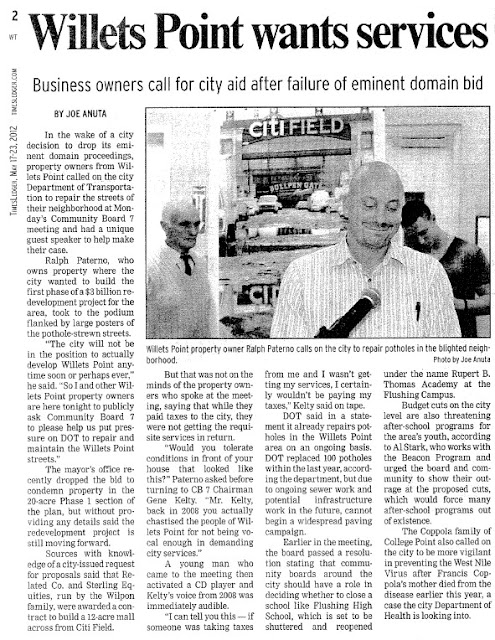 Willets Point United (WPU) – the group of property and business owners that for years has advocated for the repair of dilapidated Willets Point streets – is being shut out of a second meeting scheduled for today by Borough President Melinda Katz to discuss that issue, one month after also being excluded from the first meeting. Neither Katz nor City Council member Julissa Ferreras responded at all to multiple letters and email sent by WPU requesting an invitation to the second meeting to discuss the very issue which WPU has championed. 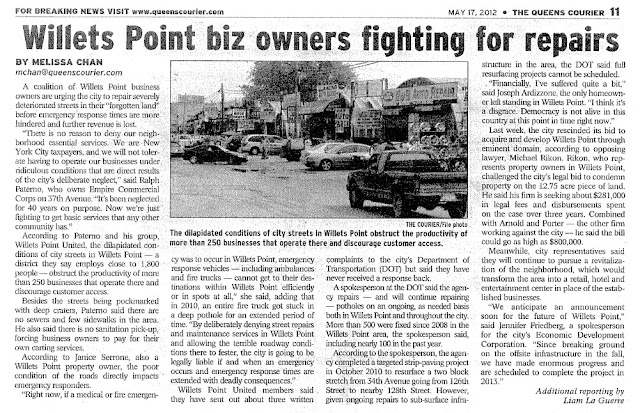 Although WPU was promised that it would receive notice of that meeting so that it could send a representative, no such notice was ever given and WPU was inexplicably excluded from the meeting.

WPU believes that it has certainly earned a seat at the table to discuss Willets Point street conditions, because WPU – not any other entity – has consistently testified at public hearings of CB7 and the Queens Borough Board to request that the city allocate funds to reconstruct Willets Point streets, and has championed that issue for the past several years. As a direct result of WPU’s efforts, CB7 and the Queens Borough Board have included Willets Point street reconstruction in their budget priorities for fiscal years 2015, 2016 and 2017. That no dollars have actually materialized, however, underscores the need for more involvement by responsible officials. CB7 has recently written to the Mayor that the response of NYCDOT is “absolutely ridiculous” – emphasizing the urgent need to set the record straight with NYCDOT concerning circumstances at Willets Point, as WPU is equipped to do. 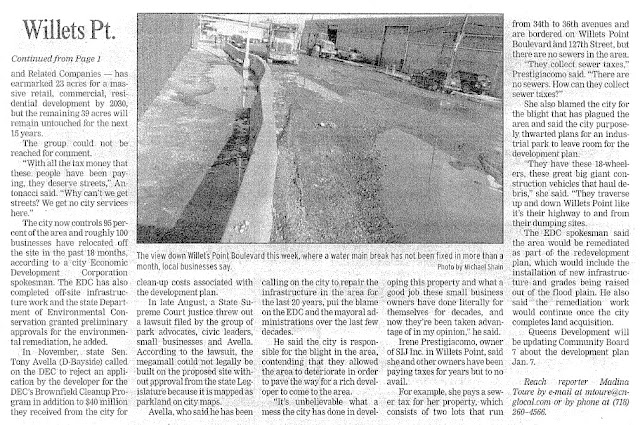 So, after being frozen out of the January meeting at Borough Hall, when WPU heard of the follow-up meeting scheduled for today, WPU sent letters to Borough President Katz and City Council member Ferreras, requesting that they invite WPU to attend. Those letters were delivered on February 25 and 26 – but WPU received no response whatsoever from Katz or Ferreras.

Yesterday, WPU tried again, by sending a copy of the letter to Katz’s Chief of Staff, Jay Bond, by email. Mr. Bond did not respond at all to WPU.

How do Katz and Ferreras possibly justify totally ignoring important communications from their constituents, concerning meetings everyone knows are important to those constituents? There are WPU property owners who pay $53,000.00 or more in annual property taxes, while receiving virtually NO municipal services in return – and for them, receiving not even the courtesy of a response from their elected representatives is adding insult to injury. 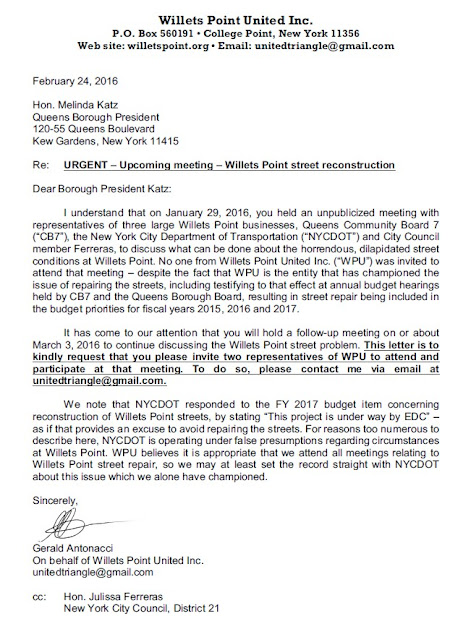 This is the modus operandi of the nexus of government and rapacious developers. This is what is being done to NYCHA housing. It's happening everywhere. Nationwide. Especially in the last decade. It's basically city sanctioned civic sabotage using the rubric of "revitalization". Why this isn't being discussed or debated in the presidential debates is outrageous

These repulsive officials are more concerned and obsessed with turning Queens into a theme park and tourist destination than to acknowledge the grievances and demands for improvement from, home owners, residents and local business owners.

They want WPU to quit and move on and move out. The same with people living in towns victimized and being menaced by gentrification.

This is nothing new. Back in the 60's and 70's people were displaced when the Bronx was burning. Arsonists were clearing out certain areas for development. Flash forward to the present and we are seeing a repeat of history except that this time it is not an arsonist. In the future it will be another method. We the people need to stand up to this. Keep fighting the good fight WPU.

Lost in the mail, went into spam, the dog ate it.

Gary hit the nail on the head. BOHICA!

this should become the new motto for not only Queens, but the entire city under this sorry excuse for leadership.

Willets Point United is alive and well. If anyone thinks that parkland court case is the end of the line for legal challenges around Willets Point, think again. City can pave over its "Phase One' third of Willets Point as a parking lot, but for anything more there will be hurdles ahead.

How can anyone put faith and trust in Katz when she cohabitated for a couple of years with Curtis Sliwa and had children with him?

This woman is a colostomy bag of poor choices.

How much you wanna bet that Julissa Ferreiras will receive a free apartment from the developers once the project is done.

What arson ? everything on that point is metal buildings arsonist. These people pay taxes and deserve paved streets. It like driving on the moon at WP and even with a big 4X4 you can still bust an axle or exhaust system

Bend
Over
Here
It
Comes
Again.

good one, more apt mnemonic and acronyms from our perpetually exploited and frustrated troops.

When ever you think your neighborhood has been screwed, think about what they've done to Willet's Point.

And the idiots will vote her in again.

What do you expect from alley Katz?
She's just a low down developers' courtesan, despite her airs of pretending to care for the borough.
All you have to do is pull her contributor data online, at the board of elections web site.
Both her city council terms were bought for her by developers.
So, who do you think she represents?

As far as Ferreras goes, she is. just an underling in the game.
Follow the leaders and kiss up to your political party.
Someday they will let you run for a higher office.

There is nothing as shameful as a low or no talented career politician.
Unfortunately, that's what we have too much of in Queens.
Lackluster best describes them!

I know. I have had to work with a few of Queens' crem de la crap!

Of course the idiots will vote in Katz again and again.
She has become a brand name.
Queens voters are either to lazy or to dumb to do any careful political product shopping.

Stop voting for electeds who don't care and don't answer their constituents, start with DeBlasio and work your way down.

Bloomberg never answered anyone (Press or Public). All he would say was "I will have my Aide look into it".

I never thought I'd miss King Bloomberg, but DeBlasio has made me nostalgic for the good old days.

IT'S TOO LATE. NOTHING CAN BE DONE, THIS AREA WILL LOOK LIKE 'SKYVIEW PARC' TIMES 3 IN ABOUT FIVE YEARS...

Enough praise and misty-eyed nostalgia for the Fun Size Mayor. Look who were appointed to deputy mayor of housing and city planning positions-Alicia Glen and Carl Weisbrod, two diabolical svengalis who previously worked for Goldman Sachs and HRA Advisors in that order, that specialize in profiteering off of existing and speculative real estate. I can't think of a more blatant vertical integration of government and business. Bloomie couldn't have done a better job vetting people for these influential roles.

I was not at all fooled when Bloomberg was feigning discomfort when Bill was inaugurated that day when he stole Mario's tale of 2 cities speech. And Big Slow was a shill for Ratner when he was public aka developers advocate, which is what he truly is in his current low turnout elected position.

They will never give Willets Point the services they need. In about ten....maybe five years....another plan for redeveloping the area will emerge. Such plans have been launched since the Donald Manes days. Remember his plans for a Grand Prix racing track?
Hmmmm....just you wait and see. Flushing has got to accommodate more residents from China.