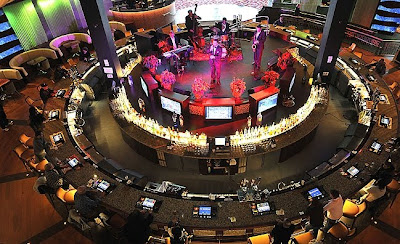 Executives in the tourism and trade show business have been lukewarm about a convention center in South Ozone Park, because of its distance from, and lack of speedy transportation to, Manhattan. They say that the appeal of coming to New York for a trade show is being in Manhattan. Shows held at the Jacob K. Javits Convention Center, for example, draw up to 15% more attendees compared with other cities.

One scenario for the future might include a land grab by Genting for the adjacent racetrack, whose operation would move to the nearby Belmont track.

“We wouldn't oppose a move to Belmont,” said Mr. Goode. The governor has even vaguely hinted that Genting's expansion could affect Belmont.

“There has always been talk about consolidating racing at Belmont,” said Rick Violette, president of the New York Thoroughbred Horsemen's Association, which represents owners and trainers at the Saratoga, Aqueduct and Belmont tracks.

“I'm sure Genting is interested in the land, but we would be very defensive against any initiative that would harm this industry,” Mr. Violette added.

And from the NY Times:

The city’s Economic Development Corporation, which is spearheading the Willets Point overhaul, did not respond directly to questions about the governor’s Aqueduct proposal. Despite that proposal, Jennifer Friedberg, a spokeswoman for the corporation, said, “our plans have not changed.”

City officials do, however, seem to be less wedded to the convention center as part of a reborn Willets Point. For example, officials take pains to point out that any convention center is years away from being built and is not included in the first phase of the project, which covers 20 of the roughly 61 acres. That phase imagines 400 apartments, 35 percent of which will be for people of limited income, a hotel and 680,000 square feet of retail space.

The corporation is poring over proposals for the first phase from a half-dozen developers and should select a winner in coming weeks. It is also close to acquiring 90 percent of the needed land and is prepared to condemn the rest through eminent domain.

Uh huh. Although a convention center was the main selling point for the project because of the jobs it would allegedly create, it was never a mandatory part of the Willets Point plan and is not part of phase 1. EDC has been at "90% of the needed land" for a long time... Oh, and phase 1 is more like 10 acres, not 20. Half of the acreage is a buffer zone.

Why doesn't anyone in this state talk to each other about the boondoggle projects they seek to inflict on the public?
Posted by Queens Crapper at 12:25 AM

Refer to the billion dollar boondoggle called Zanadu in New Jersey.
That's what would happen in Ozone Park too.

just keep waving the restoration of LIRR as the carrot, I don't care what you put there if I can get from mid-town Manhattan to the beach in 35 minutes.

Who cares whether it is needed or not? The real money is in construction, so as long as they can tear down something that will need to be redeveloped when these are finished, they can tear these down when the "new Javits" is complete in 2022.

The funniest part is watching the collective fantasy that conventions will actually want to be that far from Manhattan, even with dedicated train service.

the one in willets point will never be built , never . so glad

What's the difference between a convention center and a casino? A few hundred slot machines and the sign over the front door.

Willets Point is perfect CASINO REAL ESTATE for all the Floo-Shing faithful and their traditional gambling lifestyle. Why bus to Atlantic City, or to Foxwoods, just walk over the pedestrian bridge to Wilponimania Inc. Dinner, a game, and hey lose your shirt.

At least we will see a reduction in the goddamn fungwha buses careening about the neighborhoods.