The pipeline under Riis Park 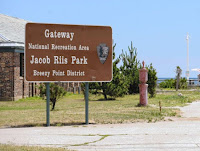 Rep. Michael Grimm’s support for a natural gas pipeline through Queens is fueling criticism that he’s a pol courting powerful private interests — not the Tea Party reformer he claims to be.

Seven months after sponsoring legislation to run a pipeline under Jacob Riis Park, the freshman congressman has collected some $3,000 from its backers.

Grimm, a former FBI agent, won his Staten Island campaigning as an outsider who wasn’t going to buy into the crippling go-along, get-along ethos of inside the Beltway.

But the intersection of money, power and legislation is highlighted in the latest campaign financial disclosure statements, not just for Grimm but others in the New York delegation.

Disgraced Queens Rep. Anthony Weiner had shown interest in the project before he resigned in June. National Grid was among Weiner’s top campaign contributors in his last run for election, giving some $6,200, according to a review by the Center for Responsive Politics.

Since July, Meeks received donations totaling $2,500 from lobbyists pressing Congress to approve the pipeline project, according to campaign reports.

Turner received a $600 from a National Grid employee before he took office, campaign financial records show.
Posted by Queens Crapper at 12:49 AM

Tapping into a pipeline of campaign contributions from this energy company, these pols are OK with the idea...cash exchanged for corruption!

With the abundance of natural gas emitted by our politicians, who needs to be dependent on foreign oil?

It's about time you posted an article about this.
Grimm received tons of $$$$ from Israeli nationals(which is illegal). I wonder how many of them are investors.

Speaking of the Riis park area, why not quarantine some of the Fort Tilden property and put up wind turbines?

ten years ago , natural gas pipelines were installed under the center median on 42nd avenue east ,to 203 street and south to 43avenue, and east to clrvw expy.

the con ed. yellow poles signal a caution there.
it passes a school,a church,and private homes and six garden apartments.

as energy is a necessity, natural gas is cheaper and clean,why the controversy ?should we freeze and starve ?how about some common sense from you greenie whackos.

boone pickens spent 100,000.000. on wind mill farms and concluded that American consumers can not afford the high cost of this energy source. he is in the natural gas business ,now.

in the political area , one must counter with the cr ony capitalism involving the democrat party and SOLYNDRA($500 million lost to taxpayers) BANKRUPTCY and the many other electric auto government subsidies that are failing, ie the G.M/CHEVY VOLT. the stock is so low that if the obama gov. sold it now ,the taxpayers would lose $25 BILLION.

"It's about time you posted an article about this."

Yes has taken a dive but they're at low risk of bankruptcy. Should we have never bailed them out? Should we build nothing and import from japan? What if there's a war and we need vehicles and hey, there's no more factories? Is that 'american'? Since when is 'roll over and die' an option?

In the 70s fedgov 'bailed out' the northeast railroads, creating one large one. By the mid 80s it was completely privatized. The investment paid off very easily. These were some of the same tracks used to move troops in WW2... they'd be needed again for national security anytime. The world is an unstable place if you take a good look at things... should we have thrown that valuable infrastructure away instead of investing/rebuilding?

I'm not going to waste my time invalidating the rest of your post... wake up.

And yes, it's unforunate GM had to be bailed out at all. Ford survived by mortgaging everything. Yes I respect them a hell of a lot more than GM...

I live in Rockaway - this doesn't make me an expert on anything but if you are going to connect Brooklyn/Queens to a natural gas pipeline out in the Atlantic - crossing the barrier island through the vast empty parking lot of Riis Park (which could use a repaving anyway) makes a whole lot of sense, putting the regulation station over in Floyd Bennett near the Police Heliport and U.S. Msrine base probably makes sense as well. Thinking that Bob Turner, the guy who financed his own campaign and lives in an oceanfront beach house is influenced by $600 does not make sense.

would you invest in G.M., if the obama government reduced your share bankruptcy return to 10% ?

"apparently when PRIVATE INDUSTRY operates according to capitalistic principle in order to save itself, thats IMMORAL.
but when GOV. does it,not only is it MORAL, it receives the active support of labor unions."

it began with a $50 BILLION bailout by taxpayers.

GM is still in business, Gramps. Bottom line. What would you be saying if they had shut down and all of those people were unemployed?

FORD MOTORS has been making and SELLING their cars without $7500. to $10,000. government taxpayer subsidies, since the subprime housing loan scandal.

Chrysler is still in business and many other auto producers function without the outrageous benefits packages that originally almost bankrupted GM. the free lunch for union s is over . it is a failure and Obamamotors chevy volt lack of sales and electric battery fires are proof.