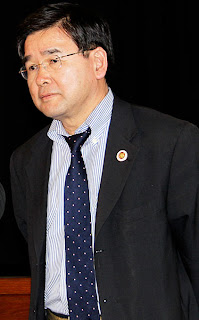 City Councilman Peter Koo (D-Flushing) is in hot water with some of his constituents over remarks made at a recent meeting, about downtown Flushing, but a community leader said some in the audience may have misunderstood what he was saying.

Koo was speaking to a perennially packed room during the 109th Precinct Community Council’s monthly meeting Feb. 8, when he said, according to audience members, that residents should stop complaining that downtown Flushing is dirty.

He also said that 99 percent of the signs in Flushing contain English, according to audience members.

His comments were enough to prompt several calls and a letter to the editor of TimesLedger Newspapers.

Koo, who recently switched to the Democratic Party after being elected as a Republican, has admitted in the past that public speaking is not his forte.

His party switch also pissed off a lot of his Facebook friends...
Posted by Queens Crapper at 12:56 AM

Downtown Flushing is the undisputed cesspool of an Asiatic colony!

The streets are filthy and the stinking fetid air can make you gag.

Is he too embarrassed about his Oriental countrymen's unsanitary practices?

Poor Peter. If he's tired of hearing his constituents valid complaints, he should find another job.

Nobody can understand his "Chingrish" anyway.

As long as there are Chinese politicians representing the downtown hub it will remain grimy and unappetizing...hardly a place to encourage shopping.

China isn't known around the world for its cleanliness or human rights.

Even the "illustrious" Wellington Z. Chen proclaimed it so in the press a few years back.

He dismissed Flushing as, "...a crappy little Chinatown...".

And who can argue with this man who is currently serving as director of the "Chinatown Partnership"?

Was Peter always this dumb, or is it something inherent in being democrat? I don't remember him saying anything this stupid when he was a republican.

I wouldn't mind losing my shoe up his ass...booting him out of office!

He was just as uninvolved and dumb when he was a Republican.

Do you really think that the "R" have a higher IQ?

Your own ignorance is on public display here, fella!

Flushing is an Oriental ghetto.

It will continue to stink and look like a crap pile until Hell freezes over.

Exactly what to expect from one of John Liu's bundlers.

That's right...Koo & Liu...out to conquer NYC for the Asiatic horde!

Too late...the political town fathers onto you two.

You've both hit your bamboo ceilings.

it looks like one flew over the Koo Koo's nest!

And tighten your necktie...you slob!

Lets give him some credit, he is on board as a co-sponsor to have a bill passed to require that signs are put in the greatest language known to mankind, English, as well as whatever alien language they choose, in which the asian community is giving him hell for.

>>he said, according to audience members, that residents should stop complaining that downtown Flushing is dirty.

He also said that 99 percent of the signs in Flushing contain English, according to audience members.<<<

How come this guy always walks around with that sloppy tie-open shirt collar look?

The man can't speak English. He's a total loose cannon. Anything he says is bound to offend because he doesn't know WHAT he's saying.

What SHOULD we complain about?

he obviously can follow the leader( J.Liu )when collecting campaign money from Asian donors . eg. the owners of the nearly completed Asian Day Care Cntr.@ 40-50 Francis Lewis Blvd ,across from P.S.130Q.
the council office is located in the owner"s building in Flushing ,Main St.

what a vehicle congestion mess this will soon be,when 250 tots and 300 K-3 public school pupils from Flushing ,Main Street arrive and leave at the same times.

Stop complaining about my shirt and tie!

Maybe the feds will be issuing Koo a subpoena soon and that will be the end of his political aspirations along with his buddy Liu's.

Nobody will ever be able
to wipe the Flushing ass hole clean.

It's filthy and it stinks...
down wind, up wind, sideways,
top and bottom!

Speaking of ass-wipes...
what the hell is the Flushing BID director doing to clean up the town?

When is somebody going to expose Koo really living in Great Neck?