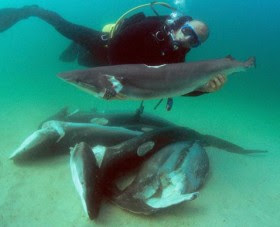 The dining menu at Genting Palace at Resorts World includes:

From Huffington Post, re: President Obama's recent visit to San Francisco, where he chowed down on Shark's fin soup:

The big problem with Great Eastern is that it serves shark fin soup, which is the product of what is widely considered one of the cruelest animal treatment practices on earth, shark finning. Shark finning is also doubly illegal in San Francisco; it's banned by both California and federal law. Critics have been quick to note that Obama himself signed the Shark Conservation Act into law last January.

Finning is the inhumane practice of hacking off the shark's fins and throwing its still living body back into the sea. The sharks either starve to death, are eaten alive by other fish, or drown (if they are not in constant movement their gills cannot extract oxygen from the water).

This post is not about Obama (who should have done his homework about where he was visiting, but probably just ate what was handed to him in order to be polite during a photo op). Rather, this post is about the electeds that pushed for the Resorts World project and continue to push for an expansion of the casino and a convention center, built and run by Genting, who apparently supports shark finning.

Do you electeds also support shark finning? Why do you support an entity that does? Why hasn't this practice been banned in New York? Governor Cuomo, are you going to do something about this?
Posted by Queens Crapper at 12:37 AM

It is really, really, really bad. At the rate that sharks around the world are being killed for their fins (like the rhino for their horns, the elephant for their tusks), many species will be extinct within a few years.

What the hell is with the Asian folk and their superstitions that make them think that eating bones, cartilage, bladders and other inedibles from rare animals make their penises work better and cures their incurable diseases??

I will be speaking to several of my elected officials tomorrow to see if they will introduce legislation to ban State-run or leased spaces from serving endangered animals for lunch!

Maspeth Mom says...its a horrible trade. In Cape Cod the fisherman catch dogfish cut the fin off and transfport the rest to Great Britian for fish and chips.

Finning should def. be made illegal.

"The sharks either starve to death, are eaten alive by other fish,...

Starving to death and drowning suck but don't sharks eat other fish alive?

the electeds support developer sharks eating up our communities - you you think they give 2 sh*ts about real sharks?

Sharks should be considered like any other natural resource. They are there to be used by man. Man is the standard of value, not sharks, fish, chickens, or even cats and dogs. Forget for a second those cuddly little guys that you mopes like to pretend are little people, the last time I checked, nobody liked sharks because they potentially kill, bite, and scare people. You martyrs will try to save anything that walks on four legs, swims, or crawls out from under a rock next...where does it end?? If we are going to give up and allow government into every aspect of our lives, I would like to make the case that "all species" shark fishing should be subsidized, to take away our fear.

Shark fin soup served in our area is probably not composed of shark fin but other fish material - so I am told. It's the biggest joke around - "makes small penises large" goes the hop behind this and it popularity in the community. So perhaps the ban would same some from parting their money on this to other buffet items instead!

This seems like a no brain-er, although it will elicit illegal trade in shark fins. I support the ban especially in light of how it's performed to obtain it. I always though the fins were a byproduct of the over all shark where the entire shark was harvested rather than just the fins. Who likes sharks when dipping your toes into the ocean, but how many of us ever saw a shark near our toes other than TV ?

There are many species of shark, and the VAST majority of them pose no threat to people. That's why they can be finned so easily.