Shaking things up on Borden Avenue 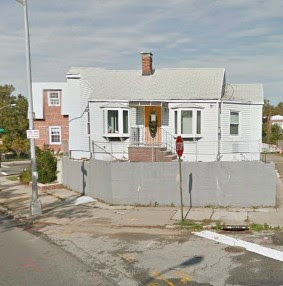 Here we are at 65-45 Borden Avenue in Maspeth. If it's an old one story home, it's sure to be replaced with crap. This one was particularly old, as it had a retaining wall in front of it. 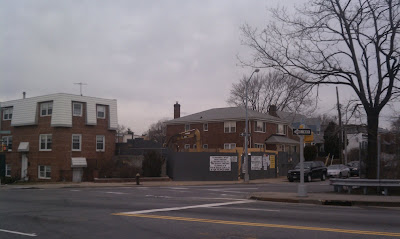 Demolition occurred recently, and as of yesterday, the operation had allegedly caused some damage to adjacent property. DOB hasn't yet responded to this priority A complaint. I think someone has to die before they haul ass out there to investigate. When they do come, they'll just call it a civil court matter and won't even levy a fine.

No plans for what will be built have been filed yet. But the lot is owned by a Fabian, so you can just imagine. The faux mansard roof on the corner building is something else, isn't it?
Posted by Queens Crapper at 12:34 AM

Just trying to be helpful: So far, only filings for DEMO

Get information for DEMO and learn some more ….. Thanks to the B-Scan Virtual (for what it really is worth?)

Proceed “caused some damage” click on the bin no. on the complaint

SOME DOCUMENTS NOT AVAILABLE FOR VIEWING

Deliberate Yes: Not complied with – Nobody typically wants to take responsibility for these most important tasks. Architect/Engs.

Really, no much has changed at the DOB

So where is your city council person - IF this is a problem that is recurring why don't you take care of another recurring problem and kill two birds with one stone: get after your electeds.

Look how Jimmy Van Bramer takes care of the development on the waterfront. Some trustafarian moves next to a rail yard and loses beauty sleep and Jimmy's Drawers gets in a knot.

Now contrast that to Ms Crowley and St Saviors.

Long term residents are repeatedly abused and no one seems to give a damn.

What is the (obvious) solution people?

What does the Queens Preservation Council do again?

SO WHAT IS CITY COUNCIL DOING ABOUT IT?

That house wasn't taken care of and had no restoration value. It had to go. Although I'm sure whatever replaces it will be ugly.

Because its in Queens, and if its not used to advance a politician's career or pocketbook, its on the table for something that can.

That house was moved to that location because it was in the path of the LIE when it was constructed.

The house in question was a mess. It was an old three roomer that was added onto. It had no historic value. This was not a St. Saviour type of ediface. Plus it is hard by the LIE. Car and truck traffic passes 24/7. This is not the garden spot of Queens.
The building sat on a very large lot and an apartment house or commercial building will most likely be erected there.
Also, the neighboring building with the faux mansard roof is a medical building.

The zoning here is R4-1, so an apartment building or commercial building cannot be built here. The building on the corner is residential, not a medical building. You simply have no clue what you are talking about and you never answered why it "had to go." Nothing has to go. It goes because someone wants to cash in. What you will have here is two 2-family houses with illegal basement apartments owned by absentee landlords living in either Florida or Long Island. In other words, 6 units replacing one in an already overdeveloped and underserved neighborhood.

"You simply have no clue what you are talking about..."
go to the corner of 66th Street aand Borden Ave. and you'll find a medical building. Go east another block and you'll find a gas station. Both are zoned R4-1.
Variances happen, you know that.

Why the building has to go? Because the owner wants it top so therefore it is gone. Check it out. A large lot with a miniscule old home on it.
And the building with the faux mansard roof does contain offices in the basement. The last time I checked they were medical.

Thanks once again for proving that you know nothing about what you're talking about and for making my point for me. The gas station and medical building predated the zoning and are grandfathered in. A new building is subject to the new zoning. A residential building with a doctor's office in it is not a "medical building." And yes, the owner's greed is why this is going, not because it has to.

So let me get this straight... some local idiot is defending the owner for tearing down a small house on a large lot - in other words, it actually had some property around it that would soak up stormwater and provide some green - and replacing it with some monstrosity that will no doubt be 100% concrete and claims this is a private property right? It may be "a right" but that doesn't make it right.

Now you know why Maspeth isn't the "garden spot" that the retard sneers about. Funny thing is I remember when it used to be. It wasn't all that long ago. Disgusting what's become of it.

Funny, how would the commenter know how many rooms the house had and how many additions were put onto it unless he was either the owner or the realtor that was showing the house? Now you know why such positions were espoused.

You can look at the google map and see the house had green space in the back. So much for that...

I do remember when nearly everyone in Maspeth had a flower garden instead of concrete. I do remember the one family houses and lawns instead of 3 or 4 cars parked in front of shitboxes. Thank God for the cemeteries or there wouldn't be a blade of grass left.

Crapper they have you there.

We both know that rezoning is for the gullible. There are many tricks to get around it - a community facility, spot variance, and if all things fail, they will just go ahead and build something non conforming.

After they get the stop work order a few months pass until the community calms down then they go ahead.

You can count with the fingers of one hand the number of times developers had to remove floors.