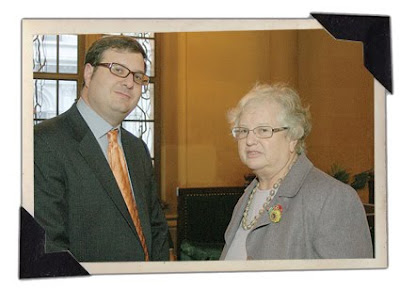 Evan Stavisky and Kristen Zebrowski Stavisky are husband and wife. He is a well-known political consultant in Queens; she is the head of the Rockland County Democratic party. When they attend the Democratic National Convention in North Carolina in September, they will represent districts an hour’s drive apart.

Their dual lives have led to grumbling among Queens Democrats and questions about the state’s porous residency laws. But Evan Stavisky says the arrangement is proper, if convoluted, as he remains as devoted to his native Queens as his wife is to her native Rockland.

Still, even though his drivers license gives a Queens address, some of his neighbors there say he is a scarce presence. “He’s rarely ever home,” one said.

What complicates the picture are Evan Stavisky’s dual roles as a Democratic district leader and a consultant with the Parkside Group, which represents some of the county’s leading candidates—including his mother, Sen. Toby Ann Stavisky, who has paid Parkside more than $440,000 over her career.

Democratic operatives claim Evan Stavisky keeps the Queens home in part to maintain his position as district leader, giving him a vote in picking local candidates and access to potential Parkside clients – accusations he angrily denies.

How funny is it that they credited this website for the photo when I quite clearly credited City Hall News - the paper that City and State used to be - for the photo back when I used it on the site? Evan's Flushing apartment is not the only place where the light's on but no one's home.
Posted by Queens Crapper at 12:28 AM

I've never seen this guy and I've been everywhere in AD 26 Part B...

The charade has got to end.

Let's keep up the heat, Crapper.

All snakes in the grass...

Who are those two women in the photo?

BTW,
when RU going to make mommy a grandma?

Really, how many years has he been married with a family of only 2 dogs?

C'mon Evan...hold your nose and bite the bullet...the dynasty needs some heirs.

Speaking of dogs...
look at the pair of pusses in this family snapshot...the same double chins.

Adam,
pull your head out of your ass.

With such busy (and very separate) schedules, hubby and wife have no time for baby making.

But the Staviskys always can find plenty of time to stick it to their constituents.

And the dumb old Jewish voters still think Toby is the cat's meow because she's their "lantzman".

And I was just about to have my breakfast!

They ARE the same. Do you really think Toby would throw anything away?

What a handsome couple! Looks must run in the family.

How much of that $440,000 was taken from the North Flushing Senior Center where Toby stashes taxpayer money? Listening FBI?

CANT HAVE ONE WITHOUT THE OTHER I SEE

WHO PULLS THE STRINGS HERE?

TIME TO UNLEASH THE WHITESTONE
DOGS OF WAR

ALFREDO CENTOLA GO GET THEM

Anonymoussaid...
this is why we need

Why dogs of war?

She's an old hack who can't do diddly squat to improve anything!

That tired old bus keeps on creeping along with her hat in the ring any time there's an election.

If it weren't for matching funds she'd be gone from the political scene already.

Millions of Queens residents are held in thrall by to the like of this?!?!? and Ackerman, Crowley, and the Vallone clan?!?!?!

you want a real non partisan beholden to no one genuine about his community guy?

al centola is the way to go

no special interests and willing to stand up to the bullies