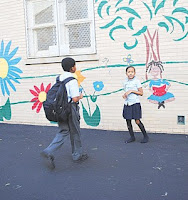 After a long fight with the city Department of Education, parents, students and community leaders are finally going to get their wish — a new playground at PS 251 in Springfield Gardens.

The DOE recently completed the design for the area and the project will be going out to bid in April, department spokeswoman Marge Feinberg said Monday.

Once a developer is selected it will take approximately six months to complete the project. The cost is estimated to be about $400,000 and will come from the capital budget, Feinberg said.

Early last year, developer Our Conduit Ltd. of Great Neck, LI, purchased several homes along the South Conduit and got permission from the city to run a sewer line under the playground and dug it up.

School officials claimed there wasn’t any money to repair the area and stated that the original playground equipment could not be reinstalled because it didn’t meet current safety standards, according to parent Michael Pinckney.

Why doesn't the developer get the bill?
Posted by Queens Crapper at 12:50 AM

my prediction is that the GREENIES will plant many trees in the concrete, and install many benches , for exercise??? they could also install a GAZEBO at home plate of the former softball field. look for the sewer drain ,under the basketball hoops and center lane of the running track.

if it happened in Bayside P.S.159, it can happen here.

No Problem! City Council will rectify it.

This is the sort of immunity that being a big political contributor buys you. It doesn't even need to be explicit, but while the city bureaucracy is crazy about $100 fines for nuisances, it won't fight for a amount that would be chump change to a developer.

Or maybe they'll restore it to the way that they found it.

In the Olden Yeares, when I was a Childe, my Playmates and I had wonderful Times cavorting in discarded Refrigerator Boxes.