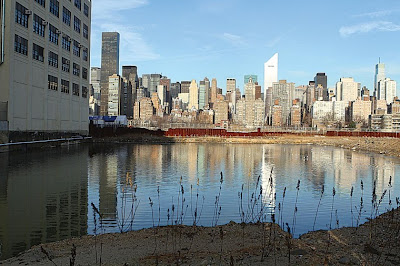 Nestled between a Department of Education office and a Con Edison building on Vernon Boulevard, hidden behind graffitied plywood fencing, is an enormous abandoned lot with a water-filled hole which Community Board 2 says people have dubbed “Lake Vernon.”

The lake has a million-dollar view — or in this case, multi-million-dollar view — that was originally intended for the residents of a massive development project called “River East.” The project, at 44-02 Vernon Blvd., was to have included two 29-story towers and smaller properties accommodating nearly a thousand apartments, according to published reports.

But the project has long since stalled and its developers are mired in foreclosure litigation, according to a spokesman for Durst Fetner Residential, which owns a $32 million note on the project. CB 2 would like the city to take over.

In its Fiscal Year 2013 request to the Borough President’s Office, the board wrote that the site is “a serious threat to the safety and quality of life to all those who live and work in close proximity.”

Yes, we need more affordable housing paid for with taxpayer-funded corporate welfare.
Posted by Queens Crapper at 12:14 AM

How about a park?

Another project with a water view - plenty of those built in the past - it's an idea that works! The natives become peaceful at the sight of serene water scapes!

How has this not undermined the foundation of the DOE building? How much money will taxpayers have to spend when this happens if it isn't happening already?