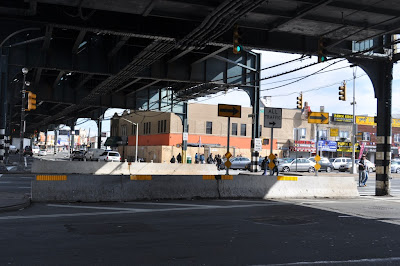 With one traffic change already in the books, a local politician has shifted his attention to another transportation issue.

State Senator Joe Addabbo (D-Howard Beach) is asking the Department of Transportation (DOT) to remove the traffic barrier on Liberty Avenue that prevents people driving on Cross Bay Boulevard from turning onto that avenue.

This comes after news came out last week that DOT changed parking regulations on the north side of Rockaway Boulevard between Cross Bay and Liberty avenues. It removed a rush hour regulation and a no standing sign and extended the metered parking hours.

Now Addabbo says that he wants to remove the barrier because, although it was put in about two years ago to improve driver and pedestrian safety, it has affected the businesses directly behind it, causing those places to lose customers and some to even close down. Addabbo said that he wants to work with the DOT on keeping that area safe for pedestrians and drivers while keeping those businesses in mind.

“I was never happy with what the DOT did, respectfully,” Addabbo said. “Those stores have suffered.”

The store owners affected by the barrier backed Addabbo’s thoughts.
Posted by Queens Crapper at 4:01 AM

Drivers in N.Y.C. are getting so bad that walking the streets is like playing a game of Russian Roulette !
More enforcement of current driving laws are needed to make walking safe again in the five boroughs.

The store owners affected by the barrier backed Addabbo’s thoughts.
+++++

I have a lot of problems with statements like this.

It simply reinforces that the only force of nature in our communities are the politicians - the rest of us are merely stage dummies that are back up.

The newspaper writer should have interviewed the community, THEN went to the local pol with

1. where were you when this was planned?

2. when are you going to listen to your community and get it removed?

Poor planning Abooboo - You should have gotten involved before the barrier. Focus on same sex marriages where in Queens your constituents are real marriages > focus on what the majority need so that all people can enjoy the barriers removed and plan properly next time so that we don't waste money. By the way Mr. Abooboo when are you up for re-election?

"although it was put in about two years ago to improve driver and pedestrian safety, it has affected the businesses directly behind it, causing those places to lose customers and some to even close down."

Yes because it's not like we're going though a big recession or anything.

Can someone tell me what yabba dabba Addabbo do?

This was one of the most boneheaded ideas D.O.T. has come up with recently.

"Yes because it's not like we're going though a big recession or anything."

--
To clarify.. I am all for this barrier (or something better looking). I'm just tired of business owners blaming safety improvements for supposed lost business while failing to realize that we have a deep recession going on that likely has had much more to do with things.

It's lazy and dishonest thinking.

He did get involved before that - so did a lot of people. DOT did what they wanted, though.

And to allege that the "Recession," which these businesses survived until very recently, is automatically the cause of their failure, is equally lazy and dishonest. You choose a location based on vehicular and pedestrian access, and if something disrupts that, it's just common sense that your business will be impacted.

"Q-C writes: "And to allege that the "Recession," which these businesses survived until very recently, is equally lazy and dishonest."

How do you know that?

Many business owners dug into their pockets to keep going hoping to weather this recession. In other cases their lease was up and The Leech killed them.

Even here in Manhattan there are still stores closing although the general trend is slightly improving.

How do YOU know that? See, you don't. That a lack of parking and foot traffic will kill a business is a fact. The businesses that are struggling here are not citing greedy landlords or digging into their own pockets to keep going. They cited that foot traffic is down since the barrier went up, which is what one would expect. I'm sure they know better than you the reasons why their neighbors went out of business. I'd like DOT to produce business owners who can cite an increase in sales since their barriers went up. After all, making the area "safer" should have brought more shoppers.

I also like how you conveniently edited out "automatically" from my quote.

Anyone factor in the loss of business in the area because of the now closed and boarded up OTB?

OTB was on the opposite side of Woodhaven. Not a factor.

This sounds like the first firing shot for Addabbo's re-election effort in a redistricted seat.

Crappy, I don't think you are wrong about the barriers being hard on businesses at the intersection--but it's kinda besides the point. The DOT's job isn't business development, it's pedestrian and vehicular safety.

It's unfortunate that making the intersection safer is bad for the businesses, but it's kinda putting the cart before the horse.

This sounds like Addabbo doing his job and representing his constituents.

I agree, considering the ecomony, and the fact that businesses are closing everywhere for many reasons (oversaturation of a particular business in an area, and insanely high rents and over regulation by the city and state agencies), it seems premature to blame business failings on barriers that could be negotiated by driving a block or two and making a u turn.

You're on your way to work, or on your 15 or 30 minute break. You want a slice of pizza, a donut or a cup of coffee. The places you used to drive right up to are now blocked by a barrier. You are going to go out of your way to drive around in a circle to get there, or are you going to find someplace more convenient to go? Common sense, folks. Most of these places make their money between 8-9am and 12-1pm.

It says right in the article:

Niaupari said that the main reason for business being down is that there is less traffic coming and going on the block that they’re on. He also said that it used to be convenient for people to park, grab something to eat or drink, then leave. Now, drivers can no longer do that as the area behind the barrier was converted to a back-in parking street only.

“They say to me ‘I don’t have the time to stop and then make a right on Cross Bay, go three blocks down and come back,” said Niaupari, referring to conversations he’s had with customers who don’t frequent the bakery anymore.

We used to shop there pretty frequently (2-3 times a month) -- there's a post office down the road that we like using -- but we haven't been in a while because it's real inconvenient. It also prevented us from hitting the shopping district on the other side of the boulevard as you can't get across Crossbay anymore.

Have no idea how many accidents it has prevented -- but I can tell you that time and time again I see cars stopping short trying to figure out how the heck they're going to get on to Liberty.

Come on now - the barriers are a no brain-er and so were the businesses being affected by the barriers.

So they were implemented in such a way that cause the businesses to suffer. Business is important to the community - many owners are from the community - SO WHERE WAS THE PLANNING PRIOR TO INSTALLATION OF THE BARRIERS?

From a traffic flow perspective, the cement divider is ridiculous. Liberty Ave is a major thoroughfare and commercial strip and you can't drive straight through Liberty from one side of Crossbay to the other! There had to have been a better way to secure safer passage for pedestrians!