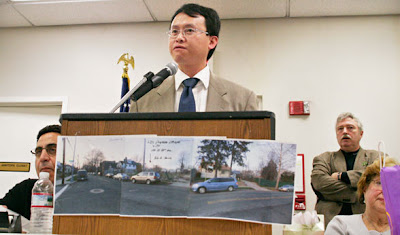 Community Board 7 roundly rejected plans Monday night from the Mormon church to build a two-story chapel on 33rd Avenue that required exemptions from zoning laws.

In an acrimonious meeting that lasted well past 11 p.m., the board unanimously voted to turn down the plans for the 23,097-square-foot chapel, complete with a steeple reaching nearly 100 feet high, which requires at least three variances to allow it to legally exceed local zoning laws.

The Church of Jesus Christ of Latter-day Saints was also required to submit separate plans for a church it could build according to zoning laws, but parishioners and clergy said it would be too small.

Instead, the proposed building, at 145-13 33rd Ave., would require three variances, although the community board said architects overlooked a few others.

The first variance would allow the chapel to have double the square footage currently allowed by law. In this case, it basically means the church wants to put a second story on its chapel where one would not normally be allowed.

The other two variances involve the steepness of a driveway into the chapel’s underground parking garage for 55 cars, and the fact that the top of the garage would stick out about a foot above normal ground level and create a sort of “deck” slightly above adjoining properties.
Posted by Queens Crapper at 12:11 AM

They want double the FAR allowed in an R2A district.
The Community Facilities law already gives them a huge bonus in an R2A district, yet here they are wanting yet more!
Couldn't they have waited for Mitt to become President first?

The cult of Joseph Smith and Brigham Young is not the humble "church" they profess to be.

They are VERY WEALTHY "missionaries" seeking to attain even more wealth through religious conversions and tithing.

They WANT but they don't really NEED a building that size.

This is, in fact, a RESIDENTIAL
neighborhood!

With a 95 foot structure what are the "Mormons" really saying?

Is it not, "My church is bigger (and better) than yours"?

Their sin of PRIDE is in full view...And Jesus CERTAINLY IS WATCHING!

This behemoth building is an out of context structure that belongs elswhere.

Let them build on their present site on Sanford Ave where zoning permits.

No, apparently they prefer to be located on what they perceive to be....the great religious midway....Parsons Boulevard!

The same question I have for commercial developers: "Why did you buy the property in the first place, when you knew its zoning would not permit you to build what you wanted to build"

This looks like it's to become a center for inculcating Flushing's dearth of Asians into the Mormon fantasy world...a "debriefing" center from reality...not a healthy prospect for living.

Think of it...with a new horde of converts tithing 10% of their income to the "church"...think of how rich, powerful and controlling the Mormons will become in the area.

Hey,
what would the "angel" Maroni do?

The US Supreme Court has already ruled that NO religious institution shall be exempt from following the laws of the land!

"[Yankee Doodle] Put a feather in his cap and called it macaroni."

Thanks George...
I prefer MORONI for it's closer to MORON.

This crap will get swallowed the same way everything else does in this neighborhood. 33rd Ave is not a commercial strip but please lets put a 55 car garage and a large church right next to houses. Why not just move it Northern where developments this size belong? Oh the "church" got it cheap? Yeah figure that...

Plus the Mormons solicited the sale of the two houses whose lots they are using from long time Flushing residents who had not otherwise planned to sell or move (and who maintained their pretty properties more neatly than any of their new neighbors) and then took forever to finish tearing down the houses after starting (leaving them in an open and vacant condition) and then left the properties as ill-maintained garbage-strewn lots for about 2 years, with falling down fences until they were forced to put up a chain link fence. The properties have been an eyesore (and a dustbowl, that turns into a mudbowl during rains, flooding the sidewalk) since they have been acquired. That poor block already suffers from the traffic from St. Paul's and its credit union (that has been robbed several times and now has armored car pickups about three times a week).

Really, what is the point of zoning and designated "residential" areas if you can have what are essentially, heavily-trafficked, huge, 24 hour unregulated businesses? Put a cross on it (or down the block, a crescent) and there are no rules and the neighbors get no sleep?

There is also another huge project going on just north of this project on 32nd Avenue (and what looks like an illegal project just down the block on 33rd Avenue between Parsons Blvd and Union St where Julia Harrison's office used to be a hundred years ago . . .).

It used to be a nice, quiet, tree-lined residential neighborhood, but now everyone that can get out, is.

come on people if reverend chan would have used apellians printing co this would have gotten the go.

How much money has Apelian made from developers' printing contracts over the years while he sat on the community board?

Chuck is also worried about "church creep" inching toward his secluded cul-de-sac.

That's why CB#7 turned down the project.

Maybe he and his neighbor John Liu can offer up both their homes to a religious institution...take their loot and run to Connecticut.

CB# 7 whizzed by their approval of that home's expansion.

I wonder what would happen if an Armenian Church were to build on the same lots that the Mormons now own?

We know at least 2 CB# 7 members of similar nationality who might favor it.

Solution:
Rezone the nabe an ecclesiastical one.
In actuality, it hasn't been very residential looking for years.

LOL! Is everybody happy?

Flushing,
the birthplace of religious bigotry!

H-m-m-m...
nobody's kicking that mega Korean Church out of the College Point Corporate Park...even though it violates city law just by it being located there!

Crooked CB# 7 allowed it without much protest.

The denser development perimeter used to be held fast up to Union Street.

Now it's been bumped further east to Parson's B'lvd.

Anyone living too close to the edge of this canyon should have sold out about ten years ago.

The attorney representing the Mormons has an unusually large forehead. I am surprised he doesn't need a variance to walk around with that thing!

I understand the Mormons claim they need a lot of footage because they can not let men and women study the bible in the same room.

So the stupider your religion, the bigger the building you get to build?