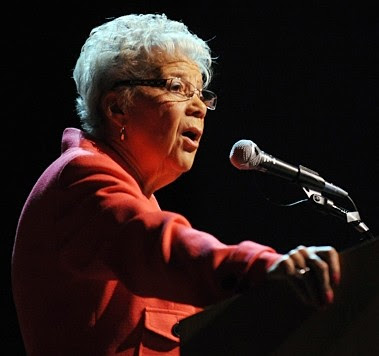 Queens is the perfect place for not one but two convention centers, Borough President Helen Marshall said Tuesday.

At her annual State of the Borough speech, Marshall backed Gov. Cuomo’s proposal to build the nation’s largest convention center near the Aqueduct racino.

But she said the city should also continue an earlier plan to create a convention center as part of the Willets Point redevelopment.

Actually, the governor said the Aqueduct convention center would replace the Javits Center so the state could sell the Manhattan site to developers.
Posted by Queens Crapper at 12:16 AM

Who am I?
Where am I?
What is this all about?

A case of "A tangle web of deciet" too confusing even for a career politician....lol..i guess its time she went out to pasture....

I've been Boro President for how long?

Dim witted Helen is confused and discombobulated about everything except which pocket to put which developer's money into.

GET RID OF THE OFFICE OF THE BOROUGH PRESIDENCY!

They do nothing but cow-tow to builders and contractors.

We ARE NOT represented by them!

Our voices are silent to their ears,
unless it's accompanied by sizable campaign contributions...
i.e. like those of Joe Mattone, etc.

And which developer has landed in her bird's nest hairdo lately?

Some of you cats were videotaping this "speech". Would you please post on YouTube the part where she babbled a Freudian slip. She wanted to promote Queens'"diverse ethnicities" but it came out "divisive ethnicities". The groan in the audience was quite loud.

'strue. Hillarious if it wasn't.

It looks like
boro hall has become a nursing home!

Your early bird dinner
is now being served, Helen.

And all of those gullible Jews who voted for Helen because they thought she was a Yiddisha grandma.

When they found out she was a "schvartza"....boy were they surprised....like I was too!

And the really cool thing about this if she ran for office again you morons would reelect her with 80% of the vote.

What does this tell us about Queens?

does she want to make the convention center closer to JFK so the illegal aliens can get more jobs? and continue to keep American Citizens on unemployment and welfare?

And a Convention Center in every pot!

She is right that the Willets convention center is to fill a needed venue for smaller trade shows and more domestic shows near LaGuardia. Demolishing Javits and building an ever bigger convention center at Aquaduct will still leave that void.

One can be for industrial conventions and the other for more "social" conventions.