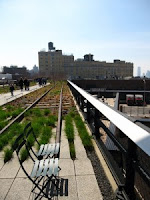 From the NY World:

Free dinners, free luncheons and barbecues, even a free $4,000 honeymoon in Istanbul – three city officials overseeing construction of Manhattan’s High Line received these and more from the chief contractor on the project. The company, Kiska Construction Corporation, had more than $60 million in contracts with the city’s Economic Development Corporation to “pretty much build 75 percent of the High Line,” Kiska vice president Alp Baysal told The New York World, “from the structure holding it all up to the finishing touches on the rails.”

In 2008, the officials who took those goodies from Kiska received something else in addition to full stomachs and a hotel room: thousands of dollars in fines from the city’s Conflicts of Interest Board (COIB).

City employees are barred from receiving gifts in excess of $50. Yet the arm of the city’s ethics law does not reach to private citizens, developers, contractors and companies, like Kiska, which repeatedly induce city officials to commit ethics violations. Kiska continues to be eligible to serve as a contractor on city projects, including the future third phase of the High Line, to be built north of 30th Street. Planning for that final section of the elevated park is now underway.

Info comes from New York Law School
Posted by Queens Crapper at 12:11 AM

From where you can buy camping/walking stuff in USA? I'd
like to go cmaping/hiking with my familly and There is out those content articles
and stores on products. Are they dependable? https://store-royale-united states.com https://www.tripsavvy.com http://www.lovetheoutdoors.com Any other suggestions?

Walmart first all the main thing u need is usually some bug security, water container and
shelter-Deep Woods Bug Spray, a normal bottle or a canteen with multiple tin foil layers wrapped onto it, and a tarp with some sheets could work.
In warmer weather anyhow. Have a backpack or
a gym bag and place your stuff in it. The tarp might need to become rolled
up and linked with the backpack/fitness center bag. Meals is good, but
you need a way to store it against animals.
Choose bearikade or a tub with chains and padlock.