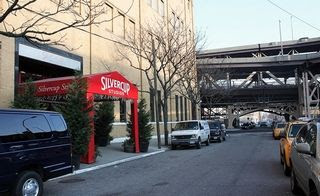 In the current television season, New York is serving as home base for 23 prime-time series. Not only that, but 188 full-length feature movies were shot here in 2011. Thrilled city officials would like to see more, pointing out that such productions pump nearly $5 billion into the city's economy each year and support roughly 100,000 jobs.

In Long Island City, Queens, though, many people have a decidedly different take on all this. There, in the epicenter of much of the action, many residents are saying enough already, and some are even begging the city to yell, “Cut.”

In addition to noise and light pollution, Long Island City residents complain about the loss of big blocks of parking spaces, a situation made worse, they say, by production crews illegally parking personal cars in spaces reserved for production trucks.

"It's just not fair because businesses are temporarily being shut down to accommodate filming," said Joseph Conley, chairman of Community Board 2 in Queens, which represents Long Island City, Sunnyside, Woodside and a portion of Maspeth. Contrary to what City Hall says, Mr. Conley sees little evidence of an upside.

“Production crews don't localize, so there's no benefit to the community,” he said, pointing out that when it comes to meals, for example, the crews bring in their own outside catering companies.

With complaints from residents and businesses rising, Mr. Conley is asking the Bloomberg administration to work together with production companies to make filming less disruptive for the community. He and others suggest setting a limit on the number of productions in a given period.

Mr. Greenberg sees another way for Hollywood to endear itself to Long Island City residents. He suggests that production companies could score major points by helping out with local projects like street repairs or park cleaning.
Posted by Queens Crapper at 12:28 AM

If they would just eat locally that would help, but they take all the regular customers parking spots, drive them someplace else and then bring all their own food in a large catering wagon...

how many of those 100,00 jobs are actual production jobs that require a lot of technical skills??? Very few.. i'll bet 90% are just grunt manual labor jobs hauling pipe moving wires setting up lights on a cherry picker....at 3am

Of course they arent localizing. Lots of "connections" and teamsters have money in the game.

Another shining example of how narrowly focused and disruptive community boards can be. Maybe the industry could do more locally, but look at the bigger picture, no pun intended. Do you realize how much tax revenue is generated by this industry? Go ahead, chase them away. You'll be sorry.

Anon. 5: Remind me again what benefits come to my neighborhood for having a movie or tv show filmed here.

It's not tax revenue by the way, but tax breaks which are given to these production companies.

the photo should have focused on the remainder of the street south bound. it would detail a large number of tractortrailer size trucks loading and unloading each day.

it is very difficult to drive on that block. btw ,the studio owns a large private parking lot across the street,for their employees, with a guard.

"how many of those 100,00 jobs are actual production jobs that require a lot of technical skills??? Very few.. i'll bet 90% are just grunt manual labor jobs hauling pipe moving wires setting up lights on a cherry picker....at 3am"

From someone who in the past has worked on many film shoots and TV spots...

You are correct about the above with regard to it being "grunt" work - almost EVERY job associated with production is. "Grunt" in the sense that it's really really hard - long hours, often unpredictable working conditions, physically demanding, stressful, and potentially dangerous at times.

However, except for your typical beginner PA (production assistant), it is "grunt" work that requires experience and knowledge of film and/or TV production and the associated equipment (powerful electrical sources, large lights, various light stands (et al) and cables, cables, cables).

Gaffers, grips and electrics are are tough, hardworking folks with a very specialized expertise and likely wouldn't appreciate the implication that what they do for a living doesn't require skills.

Ditto for anyone who drives a semi.

Ditto for most people working on location.

Do you think anyone can just show up on location and be a first electric or key grip? If hired, that person would likely be dead within a day (and the idiot who hired them would be fired pronto).

And by the way, most of the crew on any NYC shoot is typically from the city - Queens, Brooklyn, Staten Island, Bronx, etc.

What? That's not local enough? Get real...

How come they always use the Station Bar on 61st Street in Woodside (across from the "Manton" Post Office)? That's about the seediest joint with the seediest regulars in all of NYC.

Bar on 61st Street ...LOL I go there all the time never had a problem many Queens old timers. The place is a museam.
Ever see the photos on the walls ?

Joe, are you the guy with the ZZTop beard? I pass the bar everyday to buy a paper at the corner. I see alot of "regulars" outside smoking. Can their skin get any pinker? Man, I'd hate to see what their livers look like.