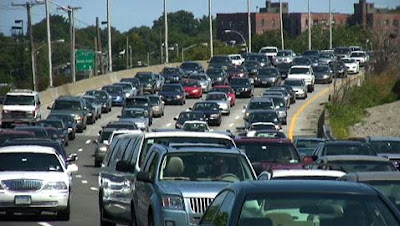 While the FGEIS [final general environmental impact statement] states half of the Iron Triangle’s auto traffic would use the Van Wyck Expressway, the latest EA [environmental assessment] lowers the figure to one third. An estimated 2,000 cars were not reassigned to local roads in the report, according to [traffic analyst Brian] Ketcham, showing “operating conditions on local roads that are better than reported in the FGEIS despite carrying 26 percent more Willets Point trips. More trips, lower impacts: it is mysterious why EDC thinks anyone will believe this.”

Ketcham claims the EDC’s reports willfully ignore the ongoing development within Downtown Flushing, with the likes of Flushing Commons, the RKO Keith’s, Skyview Parc and other big ticket projects adding to traffic congestion.

“They just don’t complete all the calculations,” he said. “My analysis does. The frustration for someone like me is where is the planning? Where is the upfront analysis? They will build it and nobody will come because they can’t get into or out of it. Or the whole area will be gridlocked.”

It doesn't matter so long as a rich developer gets what he wants.
Posted by Queens Crapper at 12:29 AM

Did these people take in to account that the vast majority of traffic coming from the van wyck into the whitestone expy is due to the large amount of douche bags that clog up the left two lanes trying to cut everyone so they can get on the bridge quicker....they need to create some kind of cut off point where u basically become screwed if your not in the bridge lane..

About 50 people in total came out to testify and the vast majority were against the ramps. The EDC girl read letters from electeds and union assholes who didn't bother to show up and those letters did not address the ramps, instead they repeated the lies that Willets Point would create jobs, etc.

CB# 7 continues to approve runaway over development projects, without much concern for inadequate infrastructure and
nightmarish congestion that already plagues the area.

They remain a major part of the problem since they are not offering any realistic solutions.

Passing the buck to DOT---who flash colorful traffic mitigation charts at public hearings---is one way to abrogate their responsibility.

If CB#7 continues remaining out of touch in their sleep walking mode, then their rubber approval stamps must be hidden from them!

They can't help it. They were born that way...

No need to sign petitions that lead to nowhere.

I've already said my piece many times more than that one way street minded Malba "gentleman".

And so your point is build it and they won't come? Well, that was spoken like a true moron!!!

Halloran has a picture of the crowd on his facebook page.

The meeting ran from 4-8pm and the article says 50 people attended. Halloran appeared at the beginning before many of the testifiers arrived. You really sound like an ass making inferences from photos on Facebook.

The photo on Facebook shows only the first few rows of seats at the front of the auditorium. Most of the Willets Point testifiers were sitting together at the back. And it also shows the auditorium before the hearing had begun. Looks like we either have McShane or a Parkside troll posting here.

When I signed up to testify, I was told it would be at least an hour before I would have the chance to speak. I went to get some coffee and came back. Others did the same. Making an assumption based on a Facebook photo kind of just makes you look like an ass.

People testified at the hearing on behalf of Queens civic associations that collectively represent over 12,000 households, and each such group also submitted written testimony. Who's in the audience is entirely besides the point. The groups have spoken, and they are either totally opposed to construction of ramps and the traffic impacts they will bring, or they are opposed to the deceitful manner in which the City is proceeding and they insist on an independent review of the adverse impacts. No civic group has come out in favor of these impacts.

Let the situation get so choked that some of the mooks get out of their cars and into mass transit.

I was on the passenger side of a car on that road and then the GCP last Thursday morning. As always, 70+% of the cars I saw were driver-only.

Manhattan is choked with such cars and it isn't plausible that many of these people couldn't have arrived by train or bus.

Asiatics are used to walking down their stinking streets with barely an inch of space between them.

Congestion means nothing to them.

Let's face it folks, the area is being developed as an Oriental colony.

Westerners are not welcome.

No round eye. Korea onry

So, nobody will go there, because it's too crowded?