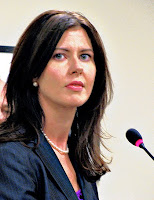 A new name is making the rounds in political circles as a replacement for the now ex-congressman Anthony Weiner: City Councilwoman Elizabeth Crowley.

The 33-year-old lawmaker would be an intriguing choice since she is the cousin of the man who will have more say than anyone over who takes the seat: Congressman and Queens County Democratic Party leader Joe Crowley.

She beat Republican Anthony Como in 2008 after losing to him in a special election earlier in the year in a district that skews relatively conservative and in a race that Congressman Crowley made a major priority of the county party.

The county party will decide who runs on the Democratic line for the seat, which should almost certainly decide who ends up winning.

Here's the rest of the pack:

And the GOP has Ulrich and Turner
Posted by Queens Crapper at 12:44 AM

She's as dumb as me!

She's not bad for a Democrat.
Her campaign manager should consult with a knowledgeable PR & wardrobe person.
Seriously--This is a multimedia world in 2011.
To many times Liz is wearing horrible shoes, "mom-ish" tailored clothing throwing her whole stature out of whack. (that costs a huge percentage of votes)
This is Queens remember ?
.
To tell you the truth right now I rather have Weiner as Mayor and Liz as Queens borough president.
(or the other way around)

The list has only Queens pols. Weiner's district includes B'klyn. Are there no B'klyn pols in the running?

This would be great! The Congressional Crowleys! Long live the Dynasty! Are there any more? Maybe every elected person in Queens can be related to the Crowelys! Awesome!!!!

Liz Crowley in congress = her sister Pat Crowley in city council, what a smooth transition. Wait a minute? what about Samanowitz? someone from Queens Blvd or forest hills is going to want that seat!

All I can say to that suggestion to me is this:

I want to see Toby and her spawn far, far away from here.

evan looks and acts like the bitchy prince from braveheart

She is grass roots but a rookie. The rest of the field sucks big time. Joe Crowley should step down for being ineffective in his district portion of Queens. Maybe his district would be best phased out.

FYI: You don't have to live in the district to run.

Well if she want's to twitter explicit pictures of herself, I'm all in.

how about choosing someone who is not a career politician? I mean Katz, Weprin, gioia... Is that the best we can do?

Anonymous said...
Well if she want's to twitter explicit pictures of herself, I'm all in.

sshhh, I hear Paul Vallone is trying to figure out a way to get Weiner's seat. He is dying to rape queens, I mean rapepresent Queens sorry.

AL Centola, not a careet politician. I am calling for a true grass roots campaign. Lets call for a write in campaign and write it Alfredo Centola.

Well,
if "dizzy" Lizzy is thinking of taking Weiner's seat....she'd better make sure he's still not sitting in it with his erect....(LOL, you get the idea).

But in her youth, hasn't she had quite a reputation for having been weiner-wild?

Queens County politics can be described as "all in family losers". the Hevesis, the Weprins, the Crowleys.

and is Avella voting for homosexual marriage ,in the state senate ?

Crapper: You're absolutely right, although they would have to "move in" (in quotation marks because they really don't) after elected.

What I don't get about what's going to happen is this: The Democratic and Republican parties are going to fight like crazy over this seat. No question; I get that. But why would any potential candidate want to expend a lot of time and effort over a seat that's not going to exist after 2012? Which other downstate congressional seat is going to be broken up?

Why should people in Brooklyn take a city in Texas?

I would think Dizzy Lizzy would keep her mouth shut about the idea of running. Unless she wants it to get out there how she gave a guy a bj in public, while she was still married and was busted by the cops. Too many skeletons in her closet....

Unless she wants it to get out there how she gave a guy a bj in public, while she was still married and was busted by the cops.

I told her to wipe her chin!!!

So I get into a hotel elevator last night and said "ballroom" and everyone moved away from me. WTF?

You know that for a fact? You were there to see that happen?

When I was young, I wanted to be a pilot. Unfortunately, every time I flew upside down I had a crack up!!!

Pat Crowley is not qualified to do ANYTHING!