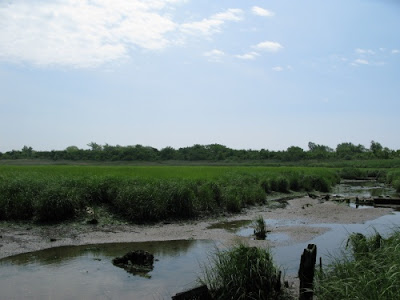 From Backyard and Beyond:

The marsh itself was mosquito-free. And tranquil-looking… but don’t let looks deceive you. Salt-marshes are one of the most productive of ecosystems, nursing fish and many invertebrates, filtering water and absorbing storm surges, pumping blessed oxygen into the air, providing food for everything from bacteria to mammals.

Green with two species of spartina, ringed by phragmites, studded with the keystone ribbed mussels, soft and hard shell clams, mud snails, fiddler crabs, and plentiful little fish in the rising tide. Is this Brooklyn? Yes, it is. A Forever Wild remnant of the salt-marshes that once ringed Jamaica Bay and much of the city. (JFK, LGA, EWR and TEB were all built on salt marshes). But “Forever Wild,” a Parks Department designation without much legal pull, doesn’t mean all that much unless we fight for it.

The EDC wants to give part of this land to Bruce Ratner so he can build a strip mall and large parking lot. The attitude is: "Who needs nature? This is NYC, damn it!"
Posted by Queens Crapper at 12:33 AM

Ah, now where are the green waterfront folks here?

I mean, if they are excited while 85% of the waterfront in LIC is owned by developers, just what the hell should be told to them to say on this little ecological issue?

Why does every last bit of nature have to be filled in with a load of crap???