Bloomberg and Cuomo can't stand each other 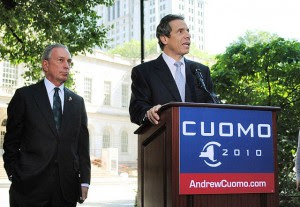 After years of relative calm between the Governor's Office and City Hall, sparks are flying once again between the state's two most powerful pols.

Mayor Bloomberg and Gov. Cuomo don't personally get along, sources told The Post.

And neither do their staffers, who don't hesitate to mock their boss' rival.

Bloomberg and Cuomo disagree on a host of issues and nowhere is it clearer than in lower Manhattan.

In recent weeks, sources told The Post, the mayor's aides have openly tried to cut Cuomo's staff out of planning for the ceremonies to mark the 10th anniversary of 9/11.

And one of the key reasons for the governor's decision to remove Christopher Ward as executive director of the Port Authority -- which is rebuilding the World Trade Center -- is that he's viewed as "a Bloomberg guy," Cuomo confidants said.

"It's a dance, and the dance didn't start off right," said one political insider.

Interesting, since Bloomberg endorsed Cuomo.
Posted by Queens Crapper at 12:42 AM

Bloomberg endorsing someone he doesn't actually support? This is not shocking information.

I can't stand either one of them.

Anonymous said...
I can't stand either one of them.

Ya took the words right out of my mouth!

well cuomo is trying to be fiscally responsible so that hurts bloombergs meal ticket.Then that makes him get bent out of shape

It's not hard to understand what is happening here; they are both imperious and egotistical -one ascending -one in decline.

All of Bloomberg's money can't change that fact.

Fuck 'em both where they breathe!

It's all just a political show.

They 69 in the men's room after the curtain falls.

I'm with Cuomo.....I can't stand Bloomberg and his administration either. A bunch of bullies and idiots ..... especially his Comm. of Parks......Mr Benepe.
They have ruined our city. Can't wait til they are out!