I was going to write a post letting you know that the St. Saviour's site had been shut down yesterday by DOB for failure to adhere to a stop work order issued in 2009. But just as I was about to hit publish, I received the following e-mail:

"I am at the St. Saviour's site right now and there is a DOB inspector here. The stop work order was not lifted but they are allowing construction to proceed. The inspector is watching the operation. There also was a sanitation inspector here this morning."

So, the DOB inspector stood there and watched construction take place on a site that has a chain link fence rather than the required construction fence, for which the owners were previously cited by DOB [note: CERTIFICATE DISAPPROVED] and there is a current complaint for the same. And on top of that, they have work plans that should never have been approved because they are inaccurate and violate zoning.

I suppose this is par for the course. [begin sarcasm] But I'm sure the elected officials are working hard behind the scenes to get this corrected [end sarcasm]. 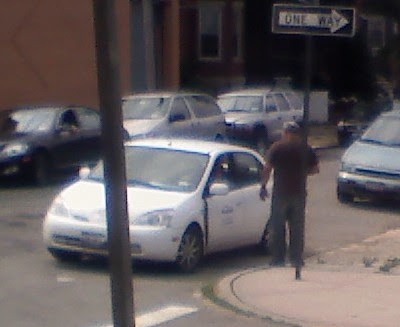 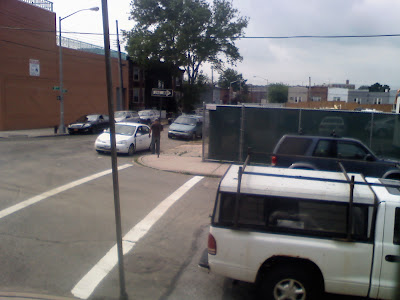 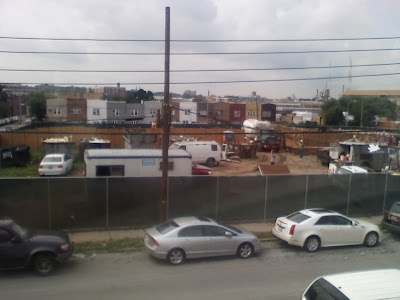 On top of this, "Notice to Revoke" was posted on the permits yesterday, yet there is an inspector aiding the operation today?
Posted by Queens Crapper at 10:45 AM

I guess DOB also didn't notice the illegal waste transfer station being operated out of the site contrary to zoning?

I wish I could write that this was shocking...

WHAT HAPPENED TO THE PARK?

Who is in charge of the DOB? That person should be held accountable. What good is a stop work order if it's ignored?

Perhaps they were making the job safe and were not doing new construction. I would imagine that was the likely reason the inspector was monitoring the site.

1. Call all the electeds that used this for a photo op a few weeks ago.

2. Tell them you tale of woe and record their reaction.

3. Do share it with us - inquiring minds want to know.

(Hey, lets have some real fun: contact all the leaders of community preservation in Queens.

Hell, why stop there - why not city wide preservation organizations - you know, the ones that go nuts over things like Columbus Circle, Greenwich Village and EXPANDING elephantine existing districts.

Ask them why stuff like this only gets mentioned ... through clentched teeth.

Crappy - the fun can extend as far as your imagination lets it.)

They were pouring more concrete. Work was proceeding as though there was no problem.

Crappy, there is no problem as far as just about everyone concerned ... and THAT my friend, IS the problem.

Sounds like the DOB is not doing its job -- AGAIN. I think there should be a shakeup at the DOB and it should be restructured. Get rid of all the supervisors and put people in charge that can get the job done and are accountable and responsible. Get rid of all the political put ins and hacks.

What is Liz Crowley doing about this?

Liz Crowley is busy getting over being moist that weiners seats open.

The Inspectors at the DON are getting paid off and everyone knows it ;-( I have falsified plans from the site next door and went to DOB REPEATEDLY AND NOTHING WAS DONE !!!! 4 illegal dry wells were put in my driveway by the owner of the building next door and how he got permits to do the work hmmm MONEY TALKS !!!!

No doubt Bloomberg sent a "Lay Off" order, he want other "plans" for Maspeth.
Some local politicians have some "s'plaining" to do.
To bad they don't have the F_ balls to speak up--or tell the truth.
Why are they so afraid of the Mayor?

Bottom line:
The mayor don't want to pay $$ for a park (especially for middle class people)
He wants this case closed and is running interference so the builder can get a foothold and "work it".

Ah, yes... a different address has New Building permit with a ten-day notice to revoke ...

BUT ... where is the stated subdivision application and approval??!!

tips for a violation complaint, it is your duty.

do not feel guilty, the greedy violator hates your community lifestyle .

do not discuss your call with "ANYONE".

Partial Rescind of Stop Work Order. It appears that they are allowing them to remove debris, backfill, etc. Of course, they will continue to do whatever else they wish to do (like pouring more concrete) while the partial rescind is in place. So much for all those new initiatives, POINTLESS. By the way, new permits were issued for new building and equipment on 4/4/11. They have been audited and their is s notice to revoke.

Click on the filing dated 7/7/10. Then click on virtual job folder and you can read the documents filed to gather more information.

Take if from someone that knows nothing has changed at the DOB, it has only gotten worse. What is the point of: hiring new enforcement individuals when someone with POWER is not letting them do their job, implementing a new code WHICH THEY FAILURE TO ENFORCE, failing to crack down on blatant zoning violations, etc. I guess it's not only the HUANGS get away with this QueensCrap.

The DOB requires certain items to be done prior to approval; prior to permits being issued and prior to sign-off. The architects self-certify the job and print the permits prior to all requirements for each phase being met.

It is not shocking at all. Just par for the course. The DOB has a push on to encourage more development and more building. Until they can do the job that they were meant to do -- no more jobs should be filed. They need to clean up the mess that has probably become insurmountable, so they do little or nothing about the illegal projects.

Also, Bloomberg should collect all the outstanding penalties and fines owed to the DOB. He probably would not have to close firehouses and lay off teachers.

Perhaps they were making the job safe and were not doing new construction. I would imagine that was the likely reason the inspector was monitoring the site.
-----------------
BS! The stop work order was issued on 11/02/09. They have not done anything to dure the violation until now? The owner/builder should be accountible for it.

Someone in the DOB can 'fix' the violations in their computer. See what happened for another project in Queens:

1. the SWO was issued by CEU on 7/15/10 for using hoist without approved plan.
2. A SWO violation was issued on 3/31/11 for failure to obey SWO. However no civil penalty was posted for this 'SWO violation'.
3. Amazingly, on 6/3/11, the SWO was misteriously lifted without anything being done.

Hold her feet to the fire for doing nothing but paying lip service.

She wants a park?

Then let her park her ass outside the DOB chief's office and hold them responsible for what's going on.

Has she called DOI for an investigation into this illegal activity and corruption on the part of the DOB?

No....because we would have heard about it.

Crowley is a do nothing ward healing machine politician.