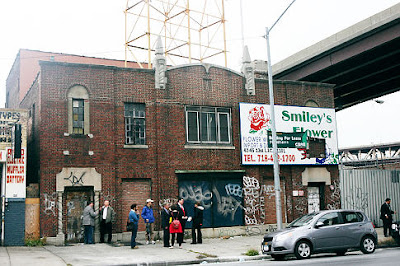 The owners of a planned Long Island City strip club are making their second bid for a liquor license, just months after their previous application was overwhelmingly rejected by local and state officials.

The firm, 21 Group Inc., plans to open a gentlemen's club called Gypsy Rose at 42-50 21st St. They will outline their plans tonight to members of Community Board 2, which will then vote on whether to support their application to the State Liquor Authority.

Local sentiment on the project, which first emerged several years ago, hasn't changed. Civic leaders and elected officials, including state Sen. Michael Gianaris, Assemblywoman Cathy Nolan and City Councilman Jimmy Van Bramer, have overwhelmingly denounced the club, saying they are trying to rid the neighborhood of its former seedy image.

The previous application was filed on behalf of a firm named GLC Entertainment. One of the principals, Konstantine (Gus) Drakopoulos, had once pleaded guilty to a charge of insider trading - a fact emphasized by the State Liquor Authority in its rejection.

UPDATE: The Daily News says today that a decision on the license has been postponed.
Posted by Queens Crapper at 12:54 AM

What a relief! I was concerned about Gianaris - had no interest - not a burp or fart from coming from his direction - on discussing the Steinway Mansion, or indeed, even acknowledging that it exists ..

but here he is boyz n girlz, concerned about a strip club.

See where his interests are? Not the community's health and well being, but the pocket books of developers.

Yes, next the the Queensbridge Houses, clattering trains and blairing cabs in Queens Plaza, which is one of the noisiest and polluted parst of the borough, hard against grim warehouses and those multiple 40 story office towers that is a monument to Suna's waterfront land grab - this will certainly provide stunning sunset views for the misses and kids.

What local sentiment? Nobody lives there or cares about the area for decades.

Now a developer is interested and the elected officials are front and center.

there is a Intermediate or high school on 21st. street,two blocks south of this proposed strip club.

Wasn't that a firehouse ?

Speaking of odd things, why is that there are all excited about restoring the Terra Cotta building while the Steinway Mansion is rotting?

I think a Rose on 21st Street would SMELL JUST FINE.

This is an unfair judgement of our industry that have no solid evidence of there vision of LIC. If you feel we are being unfairly targeted and a case of censorship please visit our facebook page for support.
http://www.facebook.com/GypsyRoseCabaret
OR http://www.ipetitions.com/petition/gypsyrosecabaret/ "