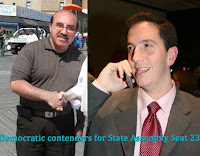 From Sergey's article in the Jewish Star:

The governor has not officially called the election date to fill the State Assembly seat vacated by Audrey Pheffer on May 12, but three Rockaway residents have emerged as top contenders in the race. “You have one from Far Rockaway, one from Breezy Point, and I’m the middle-of-the road pick,” said longtime Democratic activist Lew Simon, 51, a resident of Rockaway Park, which is located near the peninsula’s midpoint.

Initially, the widely presumed successor to Pheffer was her longtime chief of staff Jo Ann Shapiro, but she dropped out on June 1, leaving the local Democratic district party leaders to choose between Simon and Far Rockaway’s Y. Philip Goldfeder, 31, an aide to Senator Charles Schumer who previously worked on the election campaigns of Mayor Michael Bloomberg and Council members Simcha Felder, James Gennaro, and James Sanders.

...Goldfeder is a loyal Democrat and would run only if chosen by the party. In a special election, candidates without a party label must collect 1,500 signatures to be on the ballot. “There will be only one Democrat running, and Phil knows that I am running,” Simon said. “You need wide recognition, you can’t just concentrate on your base.”

While Simon expressed confidence in securing the party line, Republicans see the special election as an opportunity to win in the largely Democratic district. “We have a good candidate in Jane Deacy, she is well known as a district leader.” A retired police officer, Deacy lives in Breezy Point, and knows how to bring out her party’s voters.

Because this year does not feature any citywide, state and federal races, turnout will likely comprise of the most loyal voters.
Posted by Queens Crapper at 12:18 AM

Lew Simn sounds like he's been in the middle of the road for a long time and has been hit by a few cars while he's there.

Wow the county dems are considering passing over lew simon. He's been around for years.

A pick of Simon by the county machine would all but guarantee a republican win. Many of the county stalwarts will not work to elect Lew Liar Liar.

Love how everyone here keeps it anonymous. Hey, if you got the dirt, hit me.

Lew is a renegade in the county organization. He is the last one that they will support.

a reneagde more of a reason lew simon should be elected

he was trying to help everyone
what a good man

If we had more people in public service like lew simon the world would be a better place.

The only thing Joanne Shapiro has been a front runner in is the line at Burger King.