Several months ago a tractor trailer made an illegal right turn eastbound onto 5th avenue. The Semi hit a Fire Hydrant on the corner and proceeded to attempt to back out, running over the Hydrant again. There was a Diesel Fuel spill creating a Haz Mat situation on the block. The Hydrant has since been removed and replaced several times, due to contaminated soil underneath that needed to be removed. On June 8th 2011, both DEP and DEC were on sight once again digging out contaminated soil, and repairing hydrant due to the Diesel fuel contaminant still underground. When asked by several of the residents on 5th avenue what was going on, a high ranking DEP official explained that they would probably have to come back and dig up the street. This due to the fact that over 100 gallons of Diesel spilled onto the ground and is seeping further. 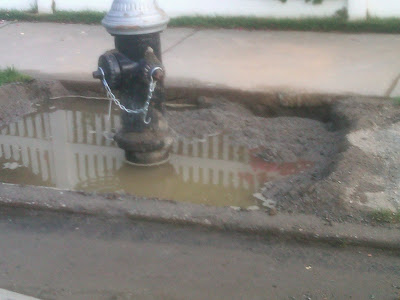 June 9th, we noticed water pooling around the hydrant, we took several pictures and sent them to CB7 as well as our Councilman's office. Our Councilman's office responded that DEP would investigate. June 10th 2011, the hydrant had a seal on it that read "NON COMPLETED WATER VALVE WORK ORDER". This on top of the fact that the first time they repaired the Hydrant it was left inoperable for several weeks until one of our members questioned its operational ability. Now yet again we have a Fire Hydrant that was rendered inoperable months ago and continues to be inoperable in a time when our immediate community is being hit with FIRE HOUSES CLOSING, ENGINE 306 IN BAYSIDE (which would be one of the houses responding to our area in the event of an emergency). 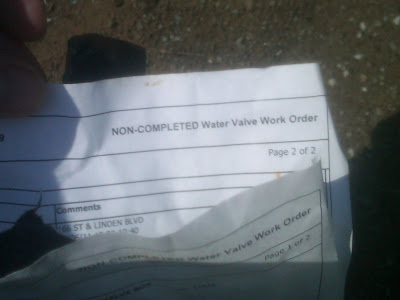 Yet again an already dangerous situation on 5th avenue in Whitestone Queens is being compounded because No one is willing to do the right thing for the block and convert it to a One Way West Bound. If this would have been done, the accident that caused this problem would never have happened. 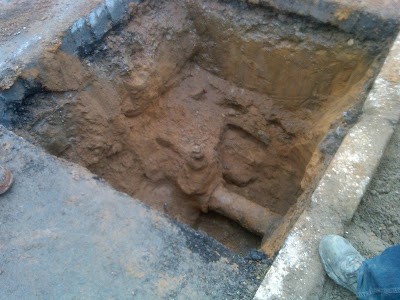 That Hydrant could have been a person or worse a child. The driver that night did not know what he ran over, only that he ran something or someone over and attempted to back up running the something or someone over yet again! (Murder?) Now we are left with contaminated soil that is traveling to the point where they may need to excavate the road. To add insult to injury , if there is a fire, GOD FORBID! The residents of 5th avenue will have to make due without a Hydrant.

Thank you to all that have allowed this Extremely Dangerous situation to continue and get progressively worse. We now have a toxic spill underground that is spreading . As well as an inoperable FIRE HYDRANT! Is the Diesel seeping into the foundations of the surrounding homes as well? Is the Fire Hydrant going to be repaired quickly?

HOW MUCH MORE MUST THE RESIDENTS OF 5TH AVENUE ENDURE????

Malba Gardens Civic Association
Posted by Queens Crapper at 12:00 AM

Wasn't Dan Halloran supposed to demand one way street action from DOT Commissioner McCarthy. I heard he got cold feet and scrapped a proposed letter. Both Dan Halloran and CB7 continue to treat the traffic issue and request for a one way a some kind of inconvenience bending to the whims of those who might be bothered by the change. Their first job to protect the safety of their constituents not grovel to special interests.

Our street has a working fire hydrant, but trucks and town cars park there with immunity, sometimes overnight, so it might not even be accessible in a fire.

The traffic police have a specific day and time when they give tickets on our block, and any other time, it's a free-for-all.

Get over it. It's Whitestone.

This street is a nightmare. I live around the corner and avoid walking on that block with my children. Cars speed on that block all day every day, trucks one in 3 vehicles is a commercial one. Truck, flatbeds, trailors, it is a mess. Someone is going to get hurt one day on that block. You cant cross on the corner. When a car breaks down on the highway it gets placed in front of someones house for days if not weeks at a time. When the bigshots go "golfing" in Westchester or with the other women and sometimes men, they park on that street for days at at a time.

What happened to the driver that struck the hydrant? I heard no summonses were issued? Hey who needs safety and a hydrant right? Toughen up you sissies, kidding of course,something needs to be done before its too late.

I also heard Marlene Cody of "Greater Whitestone" is against it because she has a personal issue with the leader of Malba Gardens Civic, is that true? even if its not a personal issue, who cares, it is in WHITESTONE, hence part of the "Greater" area. Where is the Police enforcement on this? Great job to all .

They still havent done anything for 5th avenue?????? WTF are they waiting for?

The president Malba Gardens recently got involved with a CYO issue at ST. Lukes and has been able to get more accomplished in a short time than anyone has in the last 5 years.

I know because I was privy to some of the emails and the conversations Al had with the Parks department.

Thank you Al, hope your problem on 5th gets resolved.

GWTCA has been useless since the 80's. A nice group of people almost all elderly attend the meetings and listen to the board and the invited speakers as if they are listening to Gospel. Unsuspecting elderly being lied to repeatedly as the Board along with the Developers, and a select few "Board Members" do what they want without consulting the entire membership... I know, cause I go.

Hydrant, who needs a Hydrant, this is Whitestone after all. Not like there was a fire on 12th avenue a few months ago, or two in Malba in the past year. oh wait what are they worried about the guys that firebombed the cars on 9th avenue? Oh come on, go to your local Hardware store and buy an extra 50 feet of hose and attach it to your garden sprinklers and stop whining.

This is horrible already when are our elected officials going to step up and do the right thing already? Where is Braunstein on this? Where is Avella? What does Markell have to say about this? Where is Pat Carpentiere?

Hey Vallone, you are setting up to take over with your Clinton Club, and the FARCE Lions club, and your Childrens Group, why don't you do something for these people. Do something for the community you want to sell out already. At least Hallorans office called DEP.

Wait till the remaining 6 acres of CrestHaven gets developed, and the 28 homes along the Superfund Grace site. More Development, More Cars, More Devliveries.

100 gallons of Diesel, that is bad. From past experience, they are probably going to be digging up the street and even then they will not get it all. How far are the homes from the site? They may need to be cleaned as well.

This way Dr. James Cervino and the Baccarellas make more millions getting the contract to clean it out. After of course it is taken away via eminent domain with the help of CB7 and the Vallones (for he will be kinged), and then given to a developer to make more millions. While these poor people get fucked over and over...