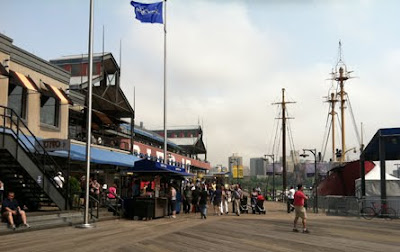 The seaport area, home to some of Manhattan's oldest architecture, has been the focus for development and revitalization projects dating as far back as the 1970s. Yet after 40 years of development, the neighborhood is far from successful.

In the 1980s, the development of the mall by the Rouse Co. was seen as a way to draw visitors to the area and help the museum's finances. Despite the commercialization of the area, the Seaport Museum of New York still faces financial trouble, taking out numerous loans over the past five years to cover its increasing debts.

The museum must deal with few visitors, on top of what founding president Peter Stanford has called mismanagement by museum chair Frank Sciame and president Mary Pelzer. As a result, the museum has closed its landside galleries, placed 32 staff members on unpaid furloughs and is in talks to remove the neglected historic boats from Pier 17.

The mall, opened in 1985 as a "festival marketplace," akin to Harborplace in Baltimore and Faneuil Hall in Boston, has also had its problems. Residents have blamed the mall for distorting the area's historic atmosphere and driving up property values, forcing out local residents and businesses.

How much do you want to bet that they'll mess it up again?
Posted by Queens Crapper at 12:29 AM

Its terrible.
Who want's to spend $50+ on lunch for 2 or buy $125 pens at Sharper Image?
Its no longer a feasible day-trip for most middle class and the euroshitz don't give a dam about our history.

Has anybody seem the recent fee's for the Museum of Natural History and Hayden Planetarium ?
Entry fees to see everything will set you back over $150. Every wing requires a separate entrance ticket.

All the tax money is going into development - trying to prop up something that is about to collapse soon anyways.

Take a look at the mental octane of your typical elected official.

Culture to them is an evening love fest giving each other plaques at the Queens rubber chicken circuit.

Look at the cultural institutions in Flushing meadow - a bottomless money pit for honest graft and the well connected....while the rest of the borough rots.

How much does the director earn?

What makes Faneuil Hall in Boston viable is it's location. It's a short walk to dozens of historic and touristy places.
SSS is sort orf an orphan off on it's own. Had they located it on the north end of Battery Park it would have a better chance of success. Tie it in with the ferries there.

And the city wants to have access to pension funds so they can waste that money too???

The seaport aspect (museum)was always an afterthought as the ships were nice but the entry fees steep and otherwise just a nice place along the waterfront. The Seaport building housed some nice restaurants initially but then they tried to clear out all the businesses and it appeared flea-market like. I guess the surronding areas were more interesting to see being restored but no one really gets a sense of the history aspect of the experience. Just a weak place to take the family.

"Residents have blamed the mall for distorting the area's historic atmosphere and driving up property values....". Residents? What year is this comment from? In 1985, there were NO (that's N-O) residents down in this area. It's only in the past 5 years that the area has become more residential. The Mall was already played out years before that.