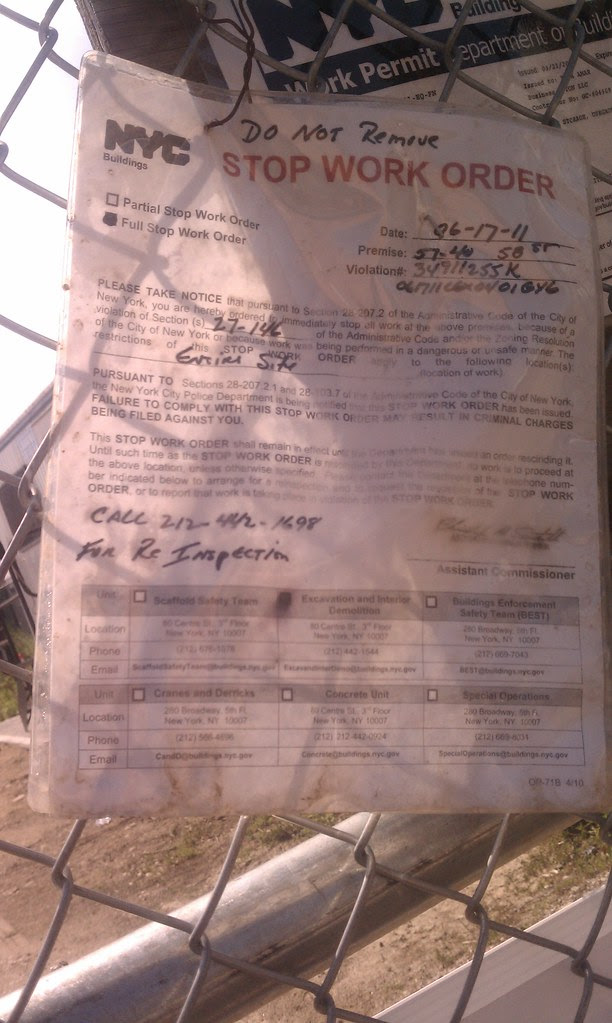 Ongoing construction at the old St. Saviour’s Church site was stopped by the city last Thursday, after activists who want a park built on the site complained about outstanding violations. 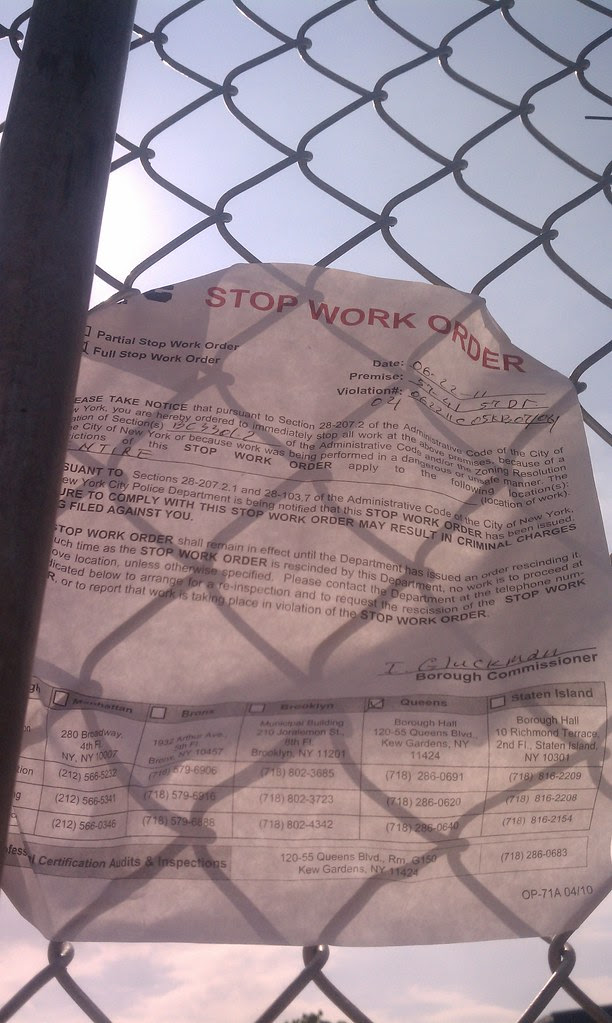 The city Departments of Buildings and Sanitation both sent inspectors to the site, according to city officials. Sanitation ordered the contractor at the site to remove dumpsters full of waste by the end of the week, but Buildings brought the construction of several warehouses on the 1.5-acre lot to a halt after activist Christina Wilkinson issued a complaint. 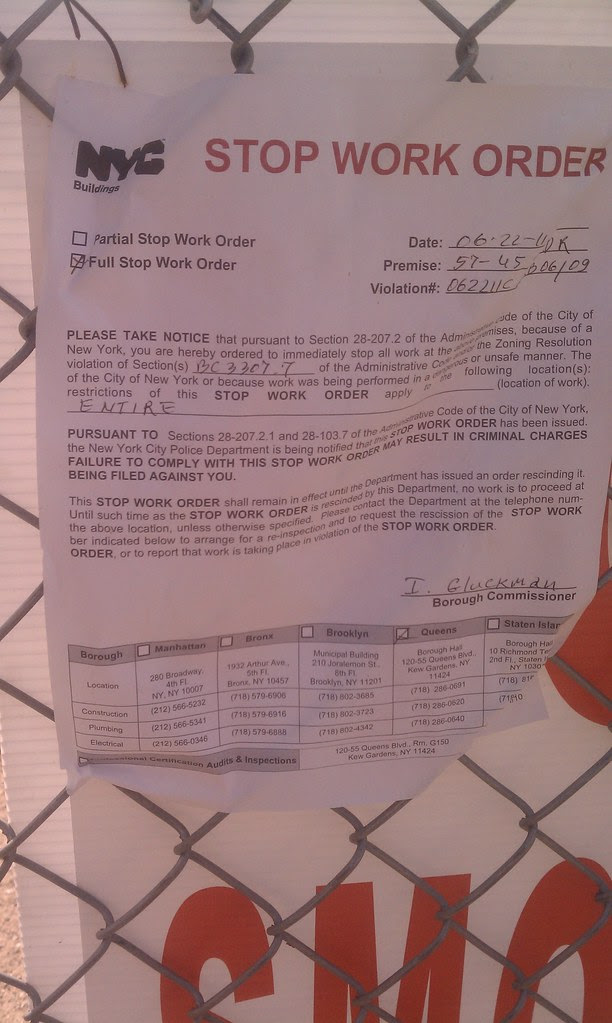 Wilkinson and other residents keep a vigilant watch over the site, and in the preceding weeks appealed to elected officials for help in getting the park project going and make sure the current construction is legal. 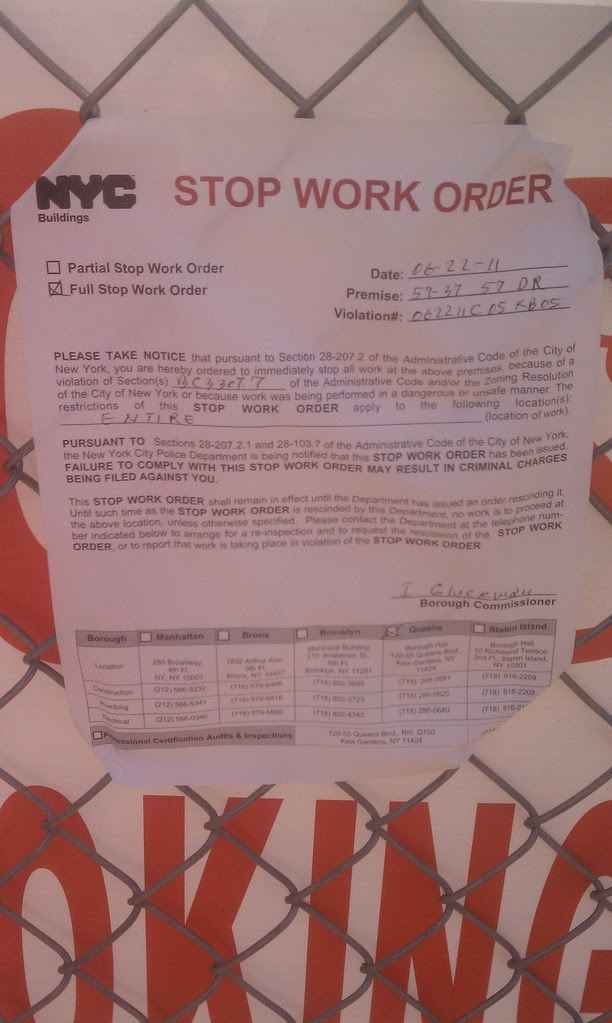 “We’re running out of time. We’ve staved off development for awhile,” she said. “It is time to do something.”

In looking at the permits (under the many addresses this parcel has) there seems to be another SWO for the fence that was issued Friday.

They had allegedly "cured" the fence violation just days before. I guess DOB doesn't bother to check to see if they are telling the truth unless someone complains.
Posted by Queens Crapper at 12:40 AM

Where do the area elected politicians, the representatives of the people stand on this industrial, non-park, construction? Officially? Verbatim and for the record?

George, thank you. Every time the reporters call me for my reaction to what is going on, I tell them to call Crowley, etc. and ask them for not only their opinion, but why they weren't the ones to get the site shut down. All they seem to do is get quotes saying, "We continue to be hopeful that there will be a park at the site." Reporters should not be satisfied with this, since that was not the question.

They take a page from EDC's playbook in the Wild West of Queens.

Beat up and betray the locals, break treaties to seize land and act like they don't exist.

Have the newspapers report glowing tributes of new cities springing up where there was only empty wasteland populated by savage natives.

Have the politicians get smiling photo ops naming places for wealthy benefactors.

Ignored, bullied, invisible, indeed laughed at behind closed doors, the locals pick up their humble belongings and disappear into history.

Christina
I worked at NBC and knew many of the news crews and field technicians operating the up-link trucks
Reporters and news media bosses will not get involved with the mayors "plans"--its an unwritten taboo.
Should a reporter write or video something the editors simply cut it out or edit it.

Blowing the whistle on something like this and pissing off the mayor will get them banned from every city event by the mayors press secretary.
The mayors office controls the permits, press passes, New York Press (NYP)license plate and special parking applications to operate in the NYC 5

You *MUST*have to be on the mayors "approved list" to get the best press passes and access to NYC events. Without those perks a news organization can not compete with others who do play the game.
"The news" Is all corrupt and about back scratching for the best access and interviews.
Access = Ratings = $$

The mayor has reporters and cameras he don't like locked out of press conferences & events.
(via his press secretary so he can pretend)

Every time the reporters call me for my reaction to what is going on, I tell them to call Crowley

THAT WAS YOUR FIRST MISTAKE

And is "dizzy" Lizzy Crowley going to keep the pressure up or drop to her knees (like she's good at) and give Big Mayor Mike his usual blow job?

It seems this property just wont become a park. The Pols inaction when it counts is to blame. The neighborhood deserves a good park and the area is already a giant brown-field and the park would have been a welcome respite to the commercial feels surrounding this area.

A park aint gonna happen.
The Mayor is out to -F & torture those Maspeth middle class white people till his last breath.
He wants them and all the 1 family homes OUT !!
What Bloomberg wants Bloomberg gets, all pols put on knee pads when he calls and tell the people lies.
Whats going on is CRIMINAL !!!