Elmhurst Dairy may lose a lot of jobs 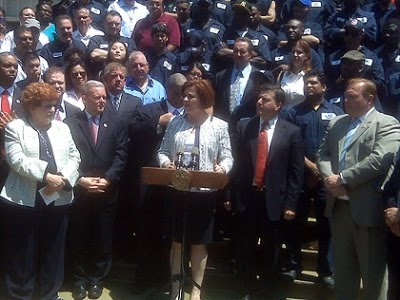 NEW YORK (CBSNewYork) — Union workers came to City Hall Wednesday to plead for their jobs ahead of a potentially devastating move by Starbucks.

Workers from Teamsters Local 584 are afraid of losing their jobs if Starbucks goes ahead with its plan to stop buying milk from Elmhurst Dairy in Queens and switch to a non-union plant outside of the city.

“If we lose our jobs, I don’t know what we’re going to do. So I’m just talking to the world, to New York City, to elected officials. Help us keep the business here in New York. Let it remain where it belongs,” one worker told reporters, including 1010 WINS’ Stan Brooks.

Some City Council members are supporting the protesters and stressed that Starbucks’ threatened move could lead to the loss of over 700 jobs.
Posted by Queens Crapper at 12:50 AM

As a child I thought the Elmhurst tanks were filled with milk. Really, it seemed logical at the time... :)

Getting linked in to one client to the point they control that percentage of your business is NOT a good idea - ask Craftsmen tools - Oh wait, their one time client (Sears) ended up owning them

Having a large client that can sink your business is foolishness, but this NYC based business (I THOUGHT THEY ARE BASED IN WESTCHESTER?)is valued and I suppose we should protest at Starbucks instead or simply go to Dunkin Donuts where the coffee is superior, larger and lower priced.

Elmhurst dairy does not directly serve NY area Starbucks stores, they are served by Bartlett dairy, which currently has its milk processed and packaged by Elmhurst dairy. Bartlett dairy has moved some of its operations to NJ
http://newyorkrealestate.citybizlist.com/18/2011/3/8/Bartlett-Dairy-Buys-105000-SF-Newark-Distribution-Center-for-4.5M.aspx
in part because of the ongoing threat of Elmhurst dairy closing its doors as a tactic in union negotiations.
http://www.nydailynews.com/ny_local/queens/2007/07/20/2007-07-20_workers_in_lockout_at_dairy_dispute_over.html

Elmhurst has been threatening to close for years, and has used this threat to hold up contract negotiations and hire new workers at much lower pay scales than existing workers. The owner doesn't deserve any sympathy from the public if he gets put out of business, but what IS important is the loss of livable wage working class jobs that people can live and raise a family on. These are the kind of jobs NYC should be attracting, not losing. Elmhurst dairy is the only milk processing plant in NYC, and there are several milk companies who purchase and distribute milk from their facilities (Queensboro Farms and Derle Farms are two of them). The closure of this plant would be a tremendous loss to the economy of NYC.

Dunkin donuts coffee is weak and watery, and is similarly priced as starbucks. How much for a 14 oz coffee at DD or a large (20 oz?)
Their donuts also suck now compared to how they used to be.

That might violate anti trust laws, as there is only one milk producer in this city.

I csn't blame Starbuck. They have to prevent price increases to keep customers happy and they need to stop hemorraging cash.

when the union makes unprofitable demands from the business owners,the owners close or move. it is that economically simple.

the union has priced its members out of a job.

the reward for risking starting a business is THE PROFIT.

Greece depended on socialism and the unionists now have no income .

The owner of Elmhurst did not invest 14 million in his plant because his business was unprofitable with union labor. It's a shame that people think that companies with millions in profits should squeeze their employees out of a living wage and health care. People want the average working person to make as little as possible, and then act shocked that so many people live in subdivided and illegal housing and receive welfare benefits and burden our hospitals with unnecessary visits for basic medical care. The loss of good working jobs in this city only worsens some of the problems addressed here on QC, and only weakens the economy of this city. These are some of the real NY'ers, not the tower people or hipsters living off of parents money.

"People want the average working person to make as little as possible.."

Gotta call BS on this.

First, what are these people making. I see no facts. What do they make and what benefits do they get and what is their job requirements ? Once that is revealed we can discuss if it's a living wage or not.

We can't abide? Quinn it's not your decision to make. This is a private company, unless you think NYC can run a dairy? Run it as good as you run the DOB ?

We are talking about truck drivers, machine operating warehouse workers, and utility workers. People who process and package and deliver much of the milk for this city. It is heavy work in a refrigerated environment, often during undesirable hours.
I believe senior workers make close to 50k and family health insurance. It's a good living for a working person to be able to raise a family on. Not exactly home ownership material, but yes, it is a decent living for hard work.
New warehouse hires make somewhere between 8.50 and 10 an hour and individual, but no family health coverage from what I understand. 21K is NOT a livable wage in this city, unless you consider sharing cramped illegal dwellings livable.
Some seem to think if a job doesn't require a college education it is not worth a decent wage. It's a shame what the perception of working people has become in this country.

Anon -1
You make a cogent argument for why the dairy should not be in Elmhurst. Cheaper to do all the processing upstate and bring the milk to NYC. It would be cheaper.
NYC has been killing of it's manufacturing base since the early 60s. Elmhurst used to be home of Kollsman Instrument (they invented the altimeter and many other aircraft instruments). They are long gone, first to Syosset and finally to Nashua NH, where the cost of doing business is much lower. They don't even have a state income tax there, much less a city income tax.

Maybe they should actually do a good job and control the quality of their product. Starbucks is a very liberal company and the fact that they are moving away from this company says a lot. Let them fail so new companies can open up. That's what the economy needs. And maybe these union workers should actually do the work required by their contracts and take pride in the fact that they have a good job, rather than sit on their asses and use the union to "protect" them from actually working for their wages.

This story is a clear example of what is wrong with media reporting.

From NY1 story..
"What Starbucks has done is, they've decided that if they buy the milk themselves and only have Bartlett deliver the milk, then they can evade the contract," said Henry Schwartz, president of Elmhurst Dairy.

In a statement, a regional vice president for Starbucks said it is not breaking any deals and that the matter is between Elmhurst Diary and Bartlett.

Starbucks claim that no jobs will be lost is based on a claim made by the company that is not losing any business (Bartlett) not by the Queens company that is actually losing the business.

We should be supporting good jobs in Queens, not letting them go elsewhere without even a peep.

And maybe these union workers should actually do the work required by their contracts and take pride in the fact that they have a good job, rather than sit on their asses and use the union to "protect" them from actually working for their wages.

Whats with the comment moderation crappy? The union guys start to comment? You afraid of what they say?

Comment moderation kicks in after a story is 3 days old to prevent spam. It's been like that for years. I guess you are a newbie to the blog, which doesn't surprise me.

I guess you are a newbie to the blog, which doesn't surprise me.
I'm sure not many stories get new comments after a day or two, so I didn't know despite the fact that I am not a "newbie" (as if that is somehow an insult).

What do you think of the contradiction between these two statements, one from the daily news and one from starbucks website.

From the daily news
"A Starbucks spokeswoman said the company has "the right to pick our suppliers. We chose Dean Foods' plant in upstate New York. It's our understanding that it would only impact 10 jobs at Elmhurst."

First and foremost, this move will result in no New York City job loss. In a court affidavit, our Jamaica, Queens, NY-based distributor, Bartlett, which contracts milk sourcing for Starbucks through Elmhurst, stated that Elmhurst advised it that “If Elmhurst lost the Starbucks volume it would not have to lay anyone off, but rather it would merely cut the substantial overtime it is currently giving its workers.”

Like I said, when I find out how many workers are actually laid off I will make sure to mention it.