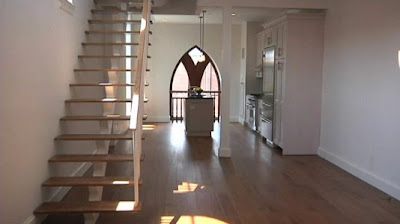 Though building conversions often chuck out the old to bring in the new, many developers are now working to incorporate a building’s history into its new design.

Kirkman Lofts in DUMBO, for example, was an old soap factory. The developer cleverly used the factory’s original silos as a centerpiece of the design.

Over in Cobble Hill is another unique conversion. The Landmark on Strong Place turned a 19th century gothic church into 21st century modern living.

Though now may appear to be a time when much of NYC’s history is disappearing, it seems developers are finding ways to take a building’s past into the future.
Posted by Queens Crapper at 12:10 AM

Realy? So why are developers in Queens bulldozing everything into oblivion (as in LIC) and are unchallenged as they tell the public that people only want new things.

Developers are only keeping what buyers and or tenants demand, brick walls, wood floors, mouldings etc. Not a bad thing.

Developers in Queens are from third world countries that wish to distance themselves from the old so that it appears they have made progress or have made it (anything new is good).

What's the latest on Steinway Mansion? Now that the auctions are over with and the contents have been disposed of, it must be pretty desolate over there. Has the executrix found a buyer for the mansion yet?