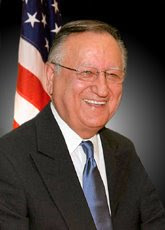 The New York City Board of Elections (BOE) may have set the stage to declare that state Senator Frank Padavan has been re-elected to his 11th District seat.

In a seven-to-three vote at a meeting on Tuesday, December 30, Democrats from the Bronx and Staten Island joined five Republican Borough Commissioners in adopting a "final determination" on approximately 1,750 invalid ballots which have been at the center of a legal dispute in the race.

After a count of nearly 91,000 votes, Padavan leads Gennaro by 580, with 252 disputed ballots set aside for judicial review.

Board of Elections rejects ballots in Padavan vs. Gennaro

However, the Gennaro-Stavisky-Shafran B.S. brigade marches on... and their shameful shenanigans may leave the 11th SD without a State Senator come January 7th, when a new majority leader is chosen. (Because dragging this out in court until that date has passed is what this is really about, not who actually won the seat.)
Posted by Queens Crapper at 12:26 AM

Glad Frank won at least Queens will have a small chance now. Gennaro is a sore loser he probably made loads of promises he now can't keep. Hey Jim put on your big girl panties and go home.

It's all about JIM and having his picture taken!

Gennaro please go away and let Frank do the job he actually campaigned for, wants and most importantly is very good at.

I am so so so happy to hear the news! 2008 was a lousy year, but its trying to redeem itself. We might be rid of Gennaro both as a senator and in 2009 as a councilman!!! Our community deserves better, Gennaro would sell his vote to the highest bidder.Green that is a joke. We need someone with ethics and a strong work ethic!!

Next step is for the Democratic machine to apologize to Frank for claiming that his team was racist in challenging the legality of some ballots. Even some Dems on the Bd of Elections have sided with Padavan.

Gennaro is taking orders from his dead guru, Sri Chinmoy. He can't stop. Gennaro needs deprogramming. The big snooze, Jim, is mind controlled and has no place in any government job.

You can find him praying at the private tennis court on Normal Road and 165th Street in Jamaica, Queens. The dirty public is not allowed in to keep it pure for the cult leaders grave site.

Go Frank.
Gennaro is a bum.