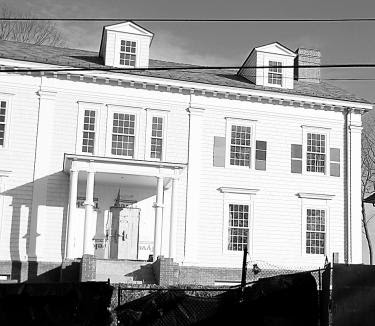 From the New York Historical Society:

Chapel Farm is located in the Riverdale section of the Bronx, New York. The area is not actually a farm, but a forest. The property was originally a religious retreat for the Griscom family, the founders of the Theosophical Society. Ludlow Griscom was the Chairman of the Board of Directors of the National Audubon Society for many years. In 1969 Chapel Farm was bought by Manhattan College to build dormitories, but used it as an environmental research station. Due to declining enrollment, Manhattan College started seeking a buyer. Over the next three decades many development plans were put forth, but never went through. One deal did proceed and the College sold five acres at the northern end of Chapel Farm to SGD Corporation. This sale included the lease of the "mansion", which is a house built by the Griscom family, for 99 years and a 99 year renewal.

The entire parcel is 17 acres. Ideal for the City to purchase for use as a much needed park, school or just to protect the many acres of trees that help to clean our environment, right?

Wrong. A developer bought the property and is currently building 15 luxury mansions that aren't selling.

The French Provincial and colonial mansions...have been available for rent — at a price tag of $35,000 a month — for some time. An online ad boasted that the homes would be ideal for the traveling diplomat or executive, but apparently there have been no takers.

After a fight with Board 8 and the Fieldston Property Owners Association that took him as far as federal court, Mr. Fitzgerald won the right to build on his land in 2004. He then had to contend with serious drainage issues. Neighbors complained as recently as last year that despite his efforts to engineer a solution to the flooding problems, runoff from his property continued to flood their homes.
Posted by Queens Crapper at 12:00 AM

Yet another example of the preservationists being 'on it.'


Now if it was in Brooklyn Heights or the West Side or ...

I doubt the City would have ever come up with the cash to pay for such an expensive piece of land for use as a park, especially since Van Cortlandt Park is just down the street. It's too bad the land couldn't be left as is, but I'm grateful he didn't get away with building high-rises there. Riverdale is starting to look like midtown Manhattan.