RIP Our Lady of Loreto Church 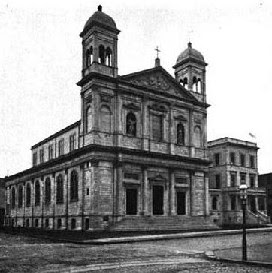 It’s hard to find much evidence of the Italian-American atmosphere that was once dominant in the Ocean Hill-Brownsville section of Brooklyn.

Only one significant landmark of the old Italian community still stands: Our Lady of Loreto Roman Catholic Church, at the corner of Sackman and Pacific Streets. Its cornerstone was laid in 1906 and work was completed two years later by the firm of Armezzani, Federici and Sons, of Paterson, N.J., according to a Catholic directory published in 1914.

But that doesn’t tell the whole story. Local legend says that poor Italian immigrants, many of whom worked in the building trades, devoted nights and weekends to finishing the project.

In recent years the parish has fallen on hard times. With the number of churchgoers dwindling to fewer than 20 on most Sundays, the Diocese of Brooklyn announced in August that it would shutter the church and merge the parish with Our Lady of Presentation, in Bedford-Stuyvesant. Now a plan is moving forward to raze the church — along with an unused convent and rectory — to make room for 88 units of housing for low-income residents of the struggling neighborhood. (The parish school has already been demolished.)

Construction of the housing, which will include 11 four-story buildings, is expected to begin in late 2009 with opening slated for 2011, Father Harrington said.

Mary Beth Betts, the research director of the city’s Landmarks Preservation Commission, told Ms. Lepak that landmark status of the church building’s exterior was under review.

A Church That Held the Neighborhood’s Heart

Since this church stands in the way of a development project in an unwealthy section of Brooklyn, it will not be designated.
Posted by Queens Crapper at 12:20 AM

Sign of the times.
At one time the neighborhood had a church many of it's residents most have gone to. A school for the kids where discipline was important.
Now the neighborhood has low cost governtment subsidized housing.
Quite the shift.

Well I guess we can chalk another 'success' to the Sacred Sites Program at MAS!


This is a crime.

I took my Communion there in 1961 after another Catholic church in East New York refused to grant my family membership because we were Puerto Rican. It had many wonderful people! Since the church served the community so honorably whereas others remained segregated for years, it well deserves landmark status in my book.

Trippler, I find your story a bit hard to believe. I wont minimize the discrimination in that period, since I lived thru it. But I never saw it in such an open way at any Catholic Church.

But I am glad you found a home in this church. And I hope the Church has a future.

I have been following all the newspaper articles about the campaign to save this church from the Our Lady of Loreto websites News & Update page.
http://loretochurch.com/Updates.html

The group that is trying to save this beautiful church has made a wonderful alternative proposal to Bishop DiMarzio. However, Bishop DiMarzio wants to sell the property to the Progress of Peoples Development Corporation who has plans to tear down the church and build 88 affordable housing.

The alternative proposal made by the group offers 102 new units of affordable housing plus restore the church and use it as a cultural and community center for future generations.

This plan is a win-win situation for everybody. So why won’t Bishop DiMarzio except their proposal?

There is no legitimate reason for the Bishop to refuses their proposal.

Bishop DiMarzio is very corrupted and he is getting a kick-back (money under the table) from the other developer.

He is all about money and has turned the Catholic church into an enterprise for his own financial gain.

Check out the Our Lady of Loreto website to see this beautiful church.