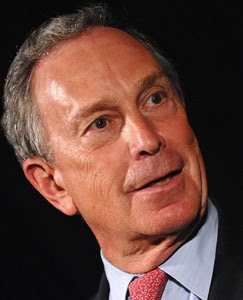 Two of Mayor Bloomberg's crucial voting bases got some transit-related relief this month, just as his controversial campaign for a third term heats up.

The city agreed to change the headache-causing alternate-side parking rules for Riverdale residents, cutting the number of street-sweeping days in half. And Staten Island express-bus riders found out that a possible $2.50 fare hike will be, at most, $1.25, compliments of the mayor.

Both Riverdale and Staten Island heavily favored Bloomberg in his contentious 2005 race against Fernando Ferrer.

"He needs to be sure people aren't angry at city government in this current economic climate with an election upcoming," said Susan Lerner, executive director of Common Cause, New York. "He doesn't want to tick people off."

Too late. I guess he hasn't finished formulating his strategy for Queens yet.
Posted by Queens Crapper at 12:27 AM

Thank goodness he doesnt want to tick people off.He obviously knows about keeping fire stations open,funding schools, funding police, and not rezoning neighborhoods for developers who live in Lower Manhattan and dont care about other area's.What a thoughtful little upper east side man of the people.

Thank goodness he doesnt want to tick people off.He obviously knows about keeping fire stations open,funding schools, funding police, and not rezoning neighborhoods for developers who live in Lower Manhattan and dont care about other area's.What a thoughtful little upper east side man of the people.

And as long as your community is filled with transients, or doddering seniors out to lunch, the local press will hide these problems behind a barage of exciting titles on the latest development, money for the latest tweeder program, and your politicans and their community boards, secure behind their walls, play with your money.

vote him out no 3rd term

Blog away folks.What have you done?
The mayor will hang himself with his own words.He wont get votes from Queens.The regulars on here are not organized against this mayor.

What exactly does "not organized" mean? We all have voter cards.